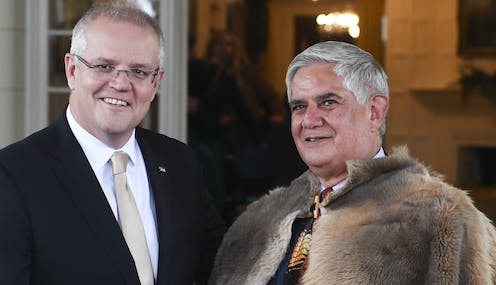 When the minister for Indigenous Australians, Ken Wyatt, recently announced a co-design process for creating an Indigenous “voice to government”, it was characterised as a shift in rhetoric.

Yet, on closer inspection, it was less a shift than a consolidation of the Liberal Party’s rhetoric on Indigenous affairs over the past two years.

In fact, Morrison was talking about a co-design model to improve local and regional Indigenous decision-making and options for constitutional recognition in the lead-up to the federal election this year. His government has also emphasised collaborating with Indigenous people to improve Closing the Gap targets.

Given the 15-year absence of such collaboration since the disbanding of the Aboriginal and Torres Strait Islander Commission (ATSIC), Morrison’s talk of “empowering partnerships” has been welcomed in some quarters. He has also used the language of accountability.

However, there are two issues here: Morrison has initiated significant changes in Indigenous affairs without consultation with Indigenous groups, and, as this suggests, there is a serious gap between rhetoric and practice.

A new approach to Indigenous policy-making

When Wyatt ruled out an enshrined Indigenous advisory body in the constitution, disappointed Indigenous leaders accused the government of “wheeling back” the consultative process after a decade-long public process.

According to the Liberal Party, he has had one. In fact, the Morrison government claims to have turned a new page when it comes to Indigenous affairs.

Morrison unveiled this new approach in his 2019 Closing the Gap report. Rejecting a top-down model as unworkable, he said the government would rely on partnerships to drive sustainable, systemic change.

Read more: The government is committed to an Indigenous voice. We should give it a chance to work

To this end, he has been building an infrastructure of his own. Last December, the Council of Australian Governments (COAG) announced a new partnership with a group of 40 Indigenous representative bodies called the Coalition of Peaks to refresh the Closing the Gap process.

This was hailed as a historic development, despite the fact there’s been a long history of inter-governmental partnerships with Aboriginal and Torres Strait Islander peoples.

In addition, within a month of the Coalition’s election victory this year, Morrison established the National Indigenous Australians Agency (NIAA) within the Department of Prime Minister and Cabinet.

Since then, $5.2 billion in funding allocated for the controversial Indigenous Advancement Strategy has been transferred to the new agency.

The former vice-chief of the defence forces, Vice Admiral Ray Griggs, a non-Indigenous Australian, also came out of retirement to head it. With a team of 1,200, he is now responsible for coordinating Indigenous policy development, advising Morrison and Wyatt on the priorities of Indigenous people and promoting reconciliation.

Around the same time, the former Indigenous peak body, the National Congress of Australia’s First Peoples, was left to crumble due to lack of government funding.

Is this systemic change? Though the government emphasises partnerships, accountability and evidence-based policies, Morrison is actually taking a selective and top-down approach. He is also ignoring key Indigenous advice and evidence.

For instance, Morrison has sidelined the work and achievements of the Referendum Council by mischaracterising its call for a Voice to Parliament as a “third chamber”.

His party has also used the rhetoric of failure in describing the the Uluru Statement – the council’s extensive, deliberative response to the question of constitutional recognition.

In addition, instead of empowering Indigenous communities, he and Wyatt are dividing them. Wyatt has said, for instance, he is interested in hearing from all Indigenous people on the co-design process toward an Indigenous voice, not just the leaders, or “influencers”.

At the same time, he has handpicked a senior advisory group of Indigenous and non-Indigenous members to lead the co-design effort – an apparent contradiction of this “bottom-up” approach.

Many Indigenous communities have also already developed models for engaging with state governments. Some worry these efforts could now be overtaken by Wyatt’s co-design process. It was hardly surprising that one Indigenous leader in NSW said:

Given the yards we’ve made and the buy-in we’ve got in the communities, it would be awesome if the Commonwealth just said, ‘You know what? It’s already there, we’re just going to come in and build on that’.

The Morrison government also says it is committed to acknowledging the historical experiences of Aboriginal and Torres Strait Islanders and taking an evidence-based approach to Indigenous policy-making.

But there is ample historical evidence showing that governmental policies have been a leading cause of Indigenous disadvantage, poor health and disempowerment.

Read more: A new inquiry into Indigenous policy must address the root causes of failure

If Morrison is serious about addressing the extremely high rates of Indigenous suicide, he would know that disempowerment, lack of self-esteem and identity, loss of community control and even loss of their own leaders are key drivers of this crisis.

If he took the high rates of Indigenous domestic violence seriously, his government would not have defunded shelters for victims in the Northern Territory.

He would also know what the Lowitja Institute advised to the Closing the Gap steering committee this year – that the principle of self-determination must apply in all Indigenous policy.

In contrast to the noisy reverberations of the Uluru Statement, Morrison has been making quiet changes in the Indigenous policy landscape. And Wyatt is travelling a well-mapped road with a predetermined destination.

The volumes of data on Closing the Gap targets obscure the important fact that a government-led approach does not constitute a new page in Indigenous affairs.