These days, not many Aussies consider the ibis a particularly admirable creature.

But these birds, now colloquially referred to as “bin chickens” due to their notorious scavenging antics, have a grandiose and important place in history - ancient Egyptian history, to be precise.

Using DNA from ibis mummies buried around 2,500 years ago, our research published today explores this bird’s stature in ancient times, and how it was reared.

Our findings suggest ancient Egyptian priests practised short-term taming of the wild sacred ibis. This was likely done somewhere in natural ibis habitats, such as local lakes or wetlands. Also, it was probably done close to the Thoth temple at Tuna el Gebel, in a bid to meet an ibis demand fuelled by religious burial rituals.

We’ve bin chicken out some DNA

The preservation of bodies through mummification is a hallmark of ancient Egyptian civilisation.

Read more: Friday essay: the rise of the 'bin chicken', a totem for modern Australia

However, animal mummies in the region are much more common. And the sacred ibis, (Threskiornis aethiopicus), is by far the most common bird mummy in ancient Egypt’s underground catacombs, with more than two million found.

The Egyptian sacred ibis looks very similar to the Australian white ibis (Threskiornis molucca). We once thought they were both sacred ibises, but the two are actually sister species in the ibis family.

Our analysis of 14 sacred ibis mummies, which we collected ourselves from catacombs, helped reveal the role of this bird in ancient Egyptian society and religion. 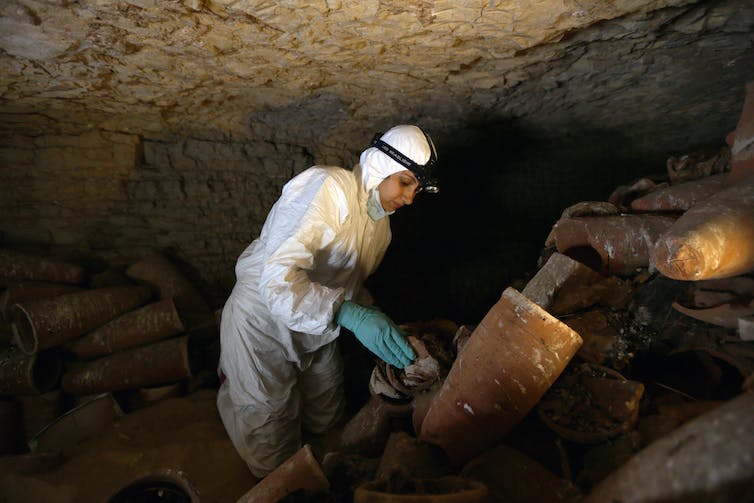 We analysed and compared mitochondrial DNA, which is a section of DNA inherited from the mother and passed only through females. In doing so, we were able to compare the genetic diversity among the ancient ibis mummies to that of modern sacred ibis populations in Africa.

All hail the Ibis

Ancient Egyptians thought animals were incarnations of gods on Earth. They worshipped the sacred ibis as the god Thoth, which was responsible for maintaining the universe, judging the dead, and overseeing systems of magic, writing, and science.

It’s not surprising then, that professionally mummified Ibises were sacrificially offered to Thoth at his annually celebrated festival. In fact, offering sacred ibis mummies in ancient Egypt was a common practice between the 26th Dynasty (664-525 BC) and the early Roman Period (AD 250).

Read more: Mummies have had a bad wrap – it's time for a reassessment

For ancient Egyptian priests, the mummification of animals like ibises was not simply a ritual duty, but also a profitable business. Considering the number of ibis mummies found, one has to wonder how the priests secured supplies for this practice.

Some evidence from ancient Egyptian text suggests the birds may have been raised in dedicated large-scale farms over the long term - either next to or within temple enclosures.

In the writings of the priest and scribe Hor of Sebennytos, from the second century BC, he reported regularly feeding about 60,000 sacred ibises with “clover and bread”. This could be interpreted as domestication, or controlled breeding.

In 1825, French naturalist Georges Cuvier described the skeleton of an ibis mummy from Thebes that he’d unwrapped, saying:

One sees that this mummy must have come from a domestic bird in the temples, because its left humerus was broken and reset. It is highly improbable that a wild bird with a wing broken would have been able to capture prey and escape predators. Hence it would have been unable to survive long enough to have healed.

Researchers today have also suggested the seasonal taming of ancient wild ibises, wherein the birds were reared over a single generation by priests, in natural habitats close to temples. Moreover, it seems they were not domesticated, which would have required breeding in captivity over many generations.

The rearing is thought to have occurred at locations such as the Lake of the Pharaoh, in which a natural basin was filled annually by flood waters from the Nile River.

These actions were almost certainly aimed at collecting a large number of adult birds, which were required for the Egyptian ritual of offering a mummified ibis to please Thoth.

1.75 million birds, then suddenly none?

Millions of sacred ibis mummies have been found stacked floor-to-ceiling along kilometres of dedicated catacombs in Egypt.

It’s believed that about 10,000 mummies were deposited annually in the Sacred Animal Necropolis at Saqqara.

Read more: A recipe for mummy preservation existed 1,500 years before the Pharaohs

This amounts to an estimated 1.75 million birds deposited at this location alone. Another catacomb at Tuna el-Gebel contains approximately four million sacred ibis mummies, the largest known number of any mummified birds at a single Egyptian site.

But these birds disappeared from Egypt around 1850, centuries after the cessation of the mummification practice. How and why they disappeared remains a mystery.

Clearly, the people of today treat the ibis in a very different way to the ancient Egyptians. For the latter, they were sacred birds that held a special place in society.

Perhaps we should remember that and recognise, at least a little, their honoured status in the past.