For many parents whose teenage children are completing Year 12, this time of year means mixed emotions. Parents might feel proud, exhausted and excited. And as young people start heading to schoolies and leavers’ celebrations, many parents may also feel nervous — maybe a little freaked out.

Part of the appeal of schoolies celebrations, which start this weekend in some areas, is they give teenagers a chance to exert their independence and experiment with their identity as a young adult.

This is a normal part of growing up. But for some parents, this can create anxiety. And this anxiety can manifest in overly protective behaviours known as helicopter parenting.

Read more: Too much love: helicopter parents could be raising anxious, narcissistic children

How to avoid a crash landing

This anxiety also affects their young adult children, who in turn are more likely to be anxious.

These young people find it hard to make decisions and have poor time management. They might also avoid telling their parents things that might freak them out.

Good communication is the key to reducing parental angst and potential hovering. More importantly, it provides an opportunity to talk about high-risk situations. It also means a young person will feel they can contact their parents if they get into trouble.

So how can parents avoid freaking out and keep the channels of communication open? Think of going to schoolies as taking a flight.

1. When entering the aircraft, mind the generation gap

Young people are often scapegoated by the previous generation (think Gen Z and avocado toast). So don’t react to the media hype about the dangers of schoolies.

Last year there were concerns about an epidemic of nitrous oxide (laughing gas) at schoolies. However, these claims were unfounded.

Read more: Explainer: what is nitrous oxide (or nangs) and how dangerous is it?

Parents might roll-their-eyes at teenage behaviour in videos previous schoolies produce, such as the one below. However, from a school leaver’s perspective, these behaviours are a rite of passage.

Here’s what Ben and his mates really got up to at schoolies.

Parents need to be well informed as to what schoolies is all about. Queensland Independent Schools has developed some good resources. If young people believe their parents know what they’re talking about, they’re more likely to listen.

2. Your life-jacket is under the seat

It is important to access objective information rather than media hype. While the media often focuses on illegal drug use, most young people do not use drugs at schoolies.

Read more: Sex, drugs and alcohol: what really goes on at schoolies?

The risky use of alcohol is more concerning. Perhaps then it is not surprising many young people engage in risky sexual behaviours at schoolies.

Parental discussions about reducing the risk from alcohol use and safe sex are not only likely to have the most impact on reducing harm, teens will also see them as more relevant.

For example, when talking about drugs, teenagers will perceive information parents provide as more credible when positive, neutral and negative effects of the drug are all considered. A good source of balanced and credible drug information is Erowid, a drug education website run by a not-for-profit harm reduction organisation.

Most young people take risks. Testing the boundaries is a normal part of growing up. What did you get up to as a young person? 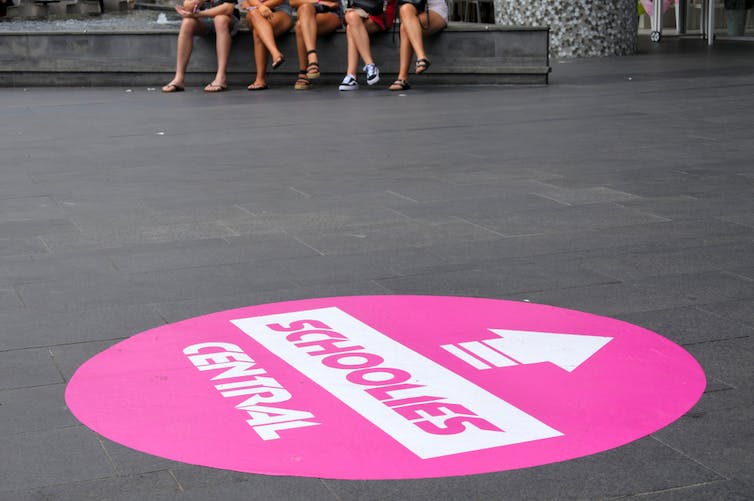 Parents can help their teens navigate the new-found freedom at schoolies. from www.shutterstock.com

If you are authentic and are open to a balanced discussion, young people are more likely to disclose past behaviour or future intentions that might concern you.

Remember to stay calm. Discuss the potential consequences, both good and bad, in a matter-of-fact manner. Reacting negatively is likely to shut down the conversation.

Some parents might be concerned about “peer pressure”. While your child can be trusted, can you trust their friends?

The likelihood of a young person succumbing to peer pressure is reduced when there is a good relationship with their parents. This is a chance to discuss creative “ways out” of risky situations.

Experimenting and exerting independence provides young people with excellent opportunities for learning and self development.

Though some learning experiences can be costly, through good communication, the risk of harm can be minimised.

In the end, parents need to trust they have instilled their values and common sense.

Read more: Schoolies, toolies and foolies – in the market for a rite of passage