You’re probably familiar with weather radar that shows bands of rain blowing in to ruin your plans for the day, or the ominous swirling pattern of a cyclone.

But rain isn’t the only thing that shows up on the radar screen. Anything moving through the sky will – like a large group of birds in flight.

Ecologists have begun to realise that weather radar data have huge potential to reveal the movements of flying animals all over the country.

At the forefront of this research is the magpie goose, an occasionally controversial waterbird prized by some and detested by others. 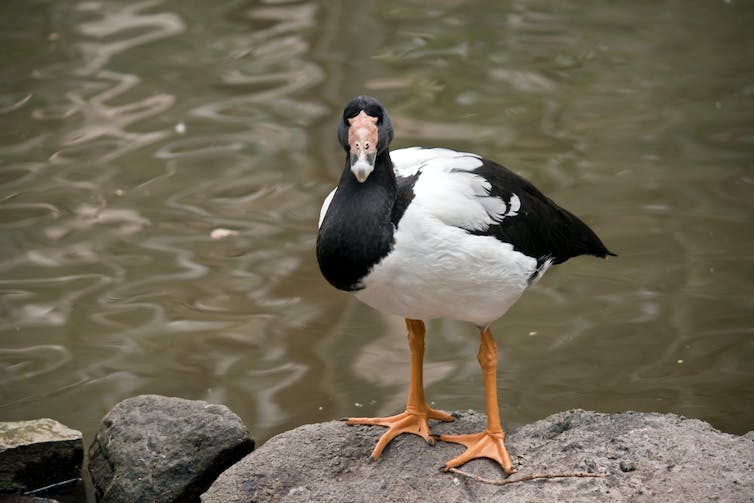 It’s a lovely day in northern Australia, and you are a magpie goose. These waterbirds are an ideal test case for weather-radar tracking. Shutterstock

To understand how we got to this point, first we need to go back 80 years. Prior to World War II, engineers were racing to improve radar systems to detect enemy aircraft when they noticed strange unexplained rings on their screens that they called angels.

Some of these angels, they realised later, were caused by groups of birds and bats taking off and flying through the radar beam. Since this discovery, there has been a steady increase in researchers using weather radar to understand how and why animals move through the air.

Radar works by sending out a sweeping beam of radio waves and listening for echoes. It processes these echoes to map the positions of objects around it.

With weather radar, the radar beam won’t only bounce off raindrops – it will also reflect back from birds. Some weather radars send out these pulses at a precise frequency, which allows them to use the Doppler effect to determine how fast objects are moving towards or away from the radar.

Meteorologists have ways to filter out clutter caused by flying animals, so they can see where it is raining. Ecologists are doing the reverse, filtering out rain from the raw data collected by weather radars in order to track the movements of birds, bats and even insect swarms. 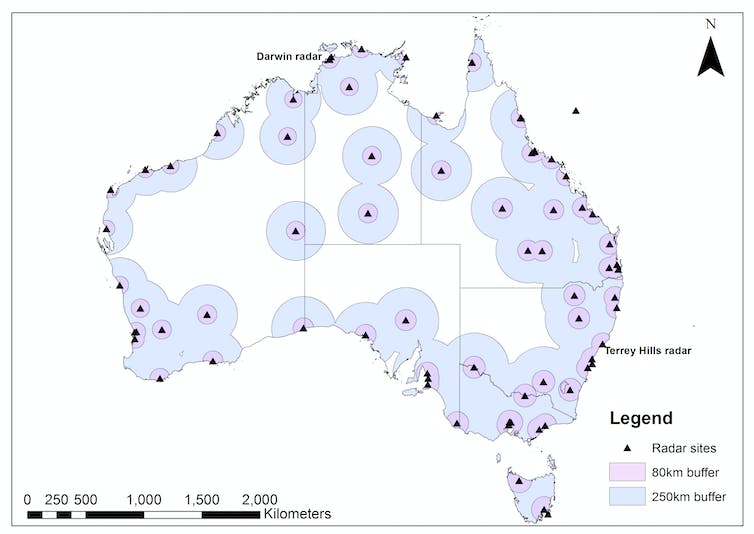 Most weather radars can give us a three-dimensional picture of what is happening in the air every 5–10 minutes. In Australia the data is archived for years and even decades in some places, and it is all available free of charge for researchers. This means we can not only understand how animals are using the airspace now, but also how these movement patterns may have changed over time.

So how do we actually tell whether those pixels on the screen are caused by rain, birds or something less common like bushfire smoke?

This is where things can get a bit more tricky. For some cases, like tracking bats coming out of a cave or roost tree, the job for the ecologist is fairly simple. For roosting species like these, we often observed very characteristic rings on the radar similar to the angels described by those early radar engineers. Examples of the rings can be found all over Australia caused by flying foxes.

Flying animals leave traces in weather radar images. The image at left shows an ‘angel echo’ caused by flying foxes coming out of a roost in NSW, while the one on the right reveals ‘blooms’ of activity on the Darwin radar, likely to be caused by magpie geese and other waterbirds taking off for their morning feeding flights. Rogers et al. (2019) - Austral Ecology

For broadly distributed species, like the magpie geese found all across northern Australia, the picture is not so easy to interpret. These animals tend to produce patterns best described as blooms of activity: they appear across the radar image, spreading out and then blending together like a bunch of flowers blooming all at once.

These patterns can look similar to rain clouds to the untrained eye. However, with some understanding of how the radar works and the behaviour of the birds – like when they are active or how high they fly – we can quickly begin to narrow down what might be causing different patterns on radar images.

Magpie geese cross paths with humans in many different ways.

They are hunted by Indigenous people for food, they are considered a pest for mango farmers and a strike risk for planes, and they could be vectors for disease.

Tracking magpie geese can help us better understand this native species and ensure it thrives long into the future.

Read more: Most native bird species are losing their homes, even the ones you see every day

Like many waterbirds, magpie geese have distinct daily patterns of movement, which makes them ideal candidates for trialling the use of weather radar to track Australian birds.

In Darwin, blooms of activity occur all over the radar in the morning and evening when magpie geese are taking off from wetlands and mango orchards for their daily feeding flights.

By using GPS tracking collars and annual survey data, we are starting to see how these patterns in the radar data correspond to real behaviour. These results are showing how weather radar could be repurposed to track the movement of magpie geese – and after that, many other kinds of birds in Australia.