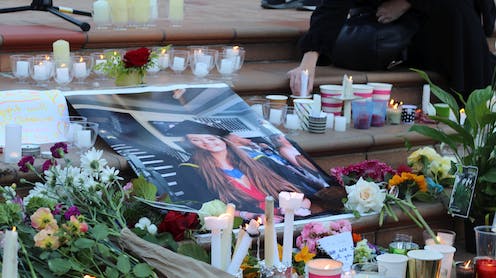 Last Friday, a New Zealand jury returned a guilty verdict in the Grace Millane murder trial. The 21-year-old British woman was killed by a 26-year-old man in his Auckland apartment in December 2018.

The high-profile trial drew criticism for its attention to Millane’s sexual history and its attempt to argue that she had consented to the violent act that caused her death.

I attended the trial and argue that bold misunderstandings about gender, power, sex, and violence were allowed to shape a defence case in ways that disrespected Millane, likely harmed courtroom witnesses and may have come close to thwarting justice.

The murder trial for Grace Millane’s killer poignantly demonstrated it is still possible to question a woman’s behaviour without understanding the specifically gendered nature of violence against women. I observed many ways this happened, as defence lawyers crafted a case that was heavy on the myth of egalitarian sexual adventure and light on the reality of gendered power that still shapes the contemporary heterosexual landscape.

Contrary to the picture they painted, study after study shows that both young men and young women still expect that men will pressure women to have sex when they don’t want it, and to engage in sexual acts they are not keen on.

Failing to understand these dynamics of men’s violence against women makes the path to courtroom justice unnecessarily rocky. It makes it potentially traumatic for surviving women who take the witness stand, and in a high profile case like this it feeds into social attitudes that misrepresent and minimise gendered violence.

Read more: We won't stop lone-actor attacks until we understand violence against women

Dynamics of men’s violence against women

A month before he killed Grace Millane, the man convicted of her murder non-fatally suffocated another woman. With his knees on the side of the bed, facing her feet, he pinned down her forearms with all his weight and sat on her face with so much force that she could not breathe. She was terrified she was going to die.

This woman was cross-examined relentlessly by the defence lawyer, who dissected her behaviour during and immediately after the attack, and in the month afterwards. He told her she had “exaggerated” what happened and asked her repeatedly why she did not leave earlier. He interrogated her about why she maintained regular text message contact with him over the following month.

The woman on the witness stand was impressive, articulate and bold. At one point, after being told yet again that she was not a reliable witness to her own experience, she told the lawyer, “You can’t minimise what happened to me. It happened.”

Read more: The latest action plan to tackle violence against women isn’t perfect, but it takes a much-needed holistic approach

As the lawyer persevered with this line of questioning, it became clear just how little he understood about the dynamics of men’s violence against women. He judged her experience from his own masculine point of view, perhaps imagining what he would have done in that situation.

He failed to understand how threat manifests differently for a woman who has been violently assaulted by a man. He appeared not to comprehend that a woman might behave differently in assessing danger, safety and risk.

Modern forms of risk and self defence

As this woman pointed out through her evidence, the defendant knew a lot about her and her movements. She knew he would be able to find her, and she worried that if she cut him off cold he would show up in her life. As a New Zealand Law Commission report notes, strangulation or suffocation “is a uniquely effective form of intimidation, coercion and control”, as it demonstrates “he can kill”.

Encountering a violent man on a Tinder date is a modern form of risk. We need to better understand what survival skills would look like in that particular kind of relationship, formed in isolation from off-line social networks and through communication technologies that can leave a person exposed through the trails of their online activity.

As this woman later worked to placate the man who attacked her, keeping him at a safe distance, while managing to avoid him in person, she was able to diffuse or delay the risk of him stalking her or turning up in person. These actions make perfect sense as a modern form of self-defence for our technology-mediated social world.

What other choices did she have? Keeping in mind that, as we now know, she had accurately assessed the defendant as a tinderbox man, prone to unpredictable, explosive, and as it turned out deadly, violence.

Moving forward, we have the opportunity to learn from this case and work for improvements. Many voices are calling for a rethink of the rules of evidence that place no limits on publicly airing deeply personal private information about the victim in a murder trial.

We also need to insist that lawyers and judges get up to date with the current state of knowledge about the nature and impact of men’s violence against women.

While defence lawyers have a duty to zealously defend their clients’ legal rights, we must debate the ethical questions about how far that can reasonably be pushed, and at what cost to justice for innocent and victimised others.