After several months of hearings, and many harrowing stories painting a picture of a system in dire need of reform, the Royal Commission into Victoria’s Mental Health System has today released its interim report.

The report contains a number of recommendations as to how the state should go about improving its approach to mental health care.

These include providing additional hospital beds, boosting the mental health workforce, increasing supports for people who have attempted suicide, and creating a dedicated Aboriginal Social and Emotional Wellbeing Centre. The commissioners have also recommended Victorians pay a new tax to enable increased funding for mental health.

Read more: 3 in 4 people with a mental illness develop symptoms before age 25. We need a stronger focus on prevention

Given Victorian Premier Daniel Andrews has committed to implementing all the commission’s recommendations, this is a major opportunity for sweeping reform.

But achieving broad system change will require streamlining state and Commonwealth responsibilities, away from the current model where blurred lines see many people falling through the cracks.

The state versus Commonwealth divide

Historically, the states had total responsibility for health. But over time, the Commonwealth has taken on progressively more responsibility, and so we find ourselves with a hybrid system.

Read more: If we're to have another inquiry into mental health, it should look at why the others have been ignored

Meanwhile, the Commonwealth provides A$1.3 billion for services in Victoria annually. This covers medical and psychological services subsidised through Medicare, medications subsidised through the Pharmaceutical Benefits Scheme, Headspace centres, support for various non-government organisations, and support for people with severe mental illness under the National Disability Insurance Scheme. 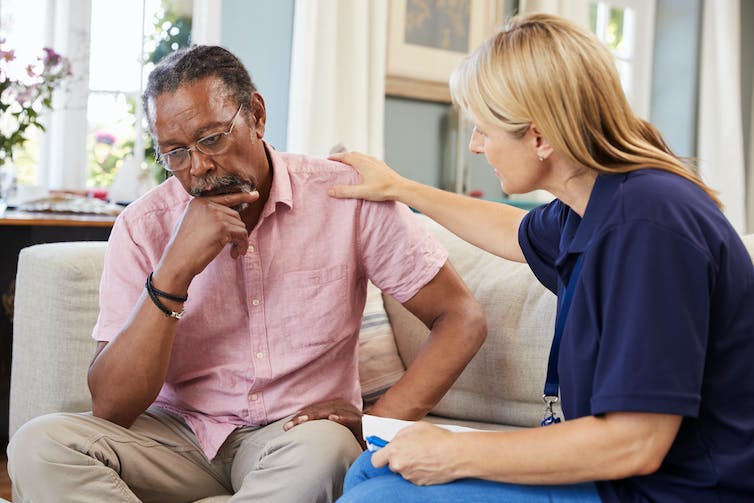 The challenge of adequately resourcing the mental health workforce is complicated by the state/Commonwealth divide. From shutterstock.com

Many of the problems the commission has identified relate to this state/Commonwealth divide. The interim report refers to “patchworked and fragmented” services, noting it’s “hard for people to know what services might be suitable and to navigate between different services”.

For example, the commission received complaints about the “missing middle”. These are people whose needs are too complex for the Commonwealth-funded primary care services, but not considered severe enough for the state-funded specialist mental health services.

The report recognises “A major contributor to the system’s complexity is the fact that no one entity has complete oversight or control of the mental health system”.

Read more: When it's easier to get meds than therapy: how poverty makes it hard to escape mental illness

Another example relates to the mental health workforce. The report notes the poorer access to services in rural and regional areas compared to metropolitan Victoria. However, this inequity partly relates to the Commonwealth’s Medicare-funded services, which allow private medical and allied health practitioners to choose where they wish to work. Most choose to work in the city and the Medicare funding system offers them no incentive to choose otherwise.

Similarly, the commission heard Victoria has an adequate supply of psychologists. However, it’s difficult to retain them in state-funded services because of the attraction of private practice, which is supported by Medicare.

The state/Commonwealth split in responsibility for mental health services in Australia represents a significant roadblock to truly reforming the system.

Is there a solution?

The commission has emphasised its recommendations are only interim measures, and that its ultimate aim is major system redesign, which will be outlined in its final report in October 2020.

While these initial measures will help many Victorians who experience mental illness in the future to receive better care than those who have gone before them, Victoria cannot achieve major system redesign alone. The state will need to work with the federal government if we want to see substantial and sustained change moving forward.

One solution is to transition to a completely Commonwealth controlled mental health system. However, this is unlikely to be accepted in Australia’s federal system, as it would substantially erode the role of the states and territories. Nevertheless, the Commonwealth is likely to play a progressively greater role over time.

A more likely solution is to move to a system based on local regions. This already exists in part through the Commonwealth’s Primary Health Networks, which were formed in 2015 to coordinate primary care services. We now need to see an integration of control for mental health services at this regional level, so one regional authority can have complete responsibility for all services in that area. This would make for a less fragmented system for consumers to navigate.

Read more: For people with a mental illness, loved ones who care are as important as formal supports

The Royal Commission has committed to creating a new mental health system for Victoria. It has recognised this requires an examination of the adequacy of services across the state, whatever the funding source.

If the recommendations in the commission’s final report can bridge the state/Commonwealth divide, this will have implications beyond Victoria and could potentially set the stage for major reform nationally.