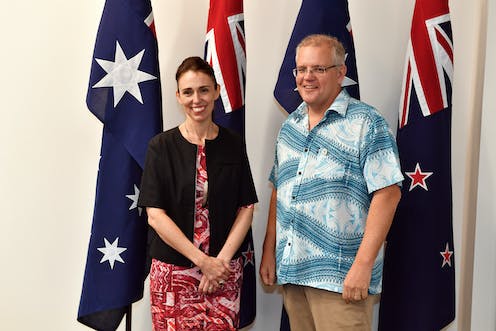 In October 2017, 37-year-old Jacinda Ardern became prime minister of New Zealand. The world looked longingly at a young and inspiring female leader who had unexpectedly catapulted the Labour Party into office.

Ardern promised that kindness, compassion and carbon-neutrality would bless the Antipodes. She then gave birth to a beautiful girl and took six weeks’ parental leave, after which dad took over as caregiver. And baby made a star appearance at the UN General Assembly. She was widely praised for her compassionate responses to the terrorist attacks on two mosques in Christchurch on March 15.

Across the Pacific, Australians unhappy with their own conservative government may have been, and may continue to be, envious of New Zealand as a bastion of progressive, compassionate government.

Read more: Centre-left politics: dead, in crisis, or in transition?

But on closer inspection, it may not be as compassionate as it seems. US President Donald Trump, for example, envies New Zealand its tough, skills-based immigration policy. And it doesn’t need a wall to keep people out, thanks to the Pacific Ocean.

Despite all the lauding of the Ardern government, Kiwis who have left for life in another country – including the 600,000 in Australia – are not flocking home. It may have something to do with higher incomes and better weather.

The Ardern you meet face to face is “as seen on TV” – a highly intelligent and empathetic person. There’s nothing fake about her. But the business of government is complex, grinding and (when you fail) unforgiving. And, in a democracy, it’s not about one person.

Due to proportional representation, to be prime minister of New Zealand, you have to build and maintain coalition relationships with other parties, some of whom you may share little in common.

Like a curmudgeonly uncle who spoils the youngsters’ Christmases, the veteran conservative populist Winston Peters has been propping up Ardern’s coalition government as deputy prime minister. And that deal came with a big price-tag, including a one-billion-dollar-per-annum provincial growth fund. It also gave Peters the power to block progressive policies, such as a tougher capital-gains tax.

Ardern over-promised on policy, especially on solving the housing crisis, and is now seen as struggling to deliver.

Auckland’s housing market remains one of the world’s least affordable – although not outdoing Sydney. Many Kiwis are still struggling with costs of living.

Ardern created an indefinable aura of promise – about a better and “kinder” politics – that resonated emotionally. In May 2018, Facebook called her the world’s “most loved” leader.

People often fall in love, but then they fall out of it. The beloved was supposed to make bad things go away. But the unspoken promise doesn’t materialise.

There is now disappointment that Ardern wouldn’t visit the land-claim protestors at Ihumātao, that she isn’t fixing the country’s electoral-finance laws, and that it took the Labour Party six months to investigate a serious sexual assault against a young female party volunteer – and even then they botched it.

Ardern readily accepts that there is still a lot to fix.

But the latest polls suggest that the next election, due in November 2020, may not go Labour’s way, and so she may not be around to fix stuff.

Ardern’s rise to power, domestically and globally, meant shouldering a burden of frustrated left-wing hopes and dreams, most of them needing radical reforms – too radical for Peters.

Ardern did not follow her predecessor Helen Clark’s third-way maxim – “under-promise and over-deliver”.

New Zealand’s three-year parliamentary term means that a new government has to face the electorate before it has had a chance to produce results.

In the May 2020 Budget we can expect big new capital expenditure to raise employment and incomes, and to fix some problems. But it remains to be seen whether Labour and the Greens can muster enough voters to overcome Kiwi conservatism.

The opinions of many Kiwis are sufficiently of the protectionist “New Zealand first” variety that, if a wave of refugees were to arrive, the reactions would be just as polarising as they have been in Australia.

New Zealand’s populist and decidedly less progressive politics are discernible, if you ask the right questions. It’s just not obvious at the moment to the outside observer.

So if you feel a twinge of Kiwi-envy, just remember it always pays to take a closer look.