Our new study showed subjects such as advanced English are studied by students with an average higher socio-economic status than students studying standard English.

Advanced English is weighted around 13 marks higher than standard English by the Universities Admissions Centre, which uses these points to calculate the ATAR. Students with a higher ATAR are more likely to get into a university course of their choice.

We examined who studies which subjects, and the benefits of studying some subjects over others in the NSW year 12 curriculum, or the Higher School Certificate (HSC).

We saw similar patterns across many subjects, including between mathematics and general mathematics, between physics, chemistry and senior science, and between economic and business studies.

We also found more advantaged students took vocational education and training (VET) subjects at a much lower rate than their less advantaged counterparts. This included VET subjects that contribute to an ATAR, and other VET subjects done in year 12.

If some subjects are more likely to get you into university, and these are not being accessed equally, we have an unequal system. This means the NSW curriculum and the system it operates in legitimises social status and later opportunity based on student family background.

We looked at 73,371 non-identifiable student records, analysing the subjects students took and their grades in the HSC. We developed a scale for student socio-economic status using information on parents’ occupation and education level, as well as the students’ gender and school location.

To determine the weight of subjects, we referred to the HSC scaled mean used by the Universities Admission Centre to calculate a student’s ATAR.

Read more: What actually is an ATAR? First of all it's a rank, not a score

We have used the ATAR as a proxy for measuring student outcomes. This is because ATAR is the basis on which places in university courses are determined, and because it is often the focus of conversations to summarise how a student went in the HSC.

The socio-economic status of a student’s parent(s), school location and student gender continue to exercise significant influence on completing the HSC, the subjects a student studies in the HSC, and ultimately their results. 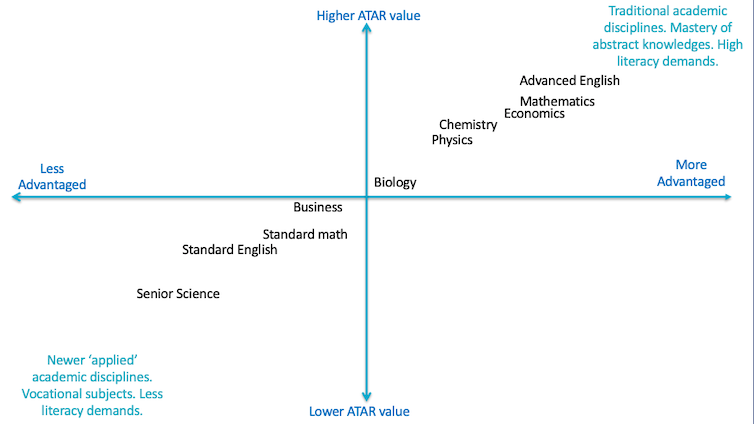 There is a hierarchy among the subjects in the NSW curriculum. Adapted from Roberts, Dean, & Lommatsch (2019)

The options weighted higher, and which therefore contributed more to an ATAR, were overwhelmingly studied by students from higher socio-economic families, and by students in the city.

There was also a gender divide.

A much higher proportion of females studied advanced English than males. And city students took the subject at nearly twice the rate of outer regional students.

This was also the case for physics, chemistry and economics when compared to senior science and business studies.

Mathematics was studied more by males but general mathematics studied about equally by males and females. However only a small proportion of outer regional students studied mathematics compared to major cities.

Read more: The majority of music students drop out before the end of high school – is the ATAR to blame?

Similar patterns could be seen in languages and within vocational education subjects. Students can study one VET subject from a limited range and sit an optional exam to have it contribute to their ATAR or study approved VET courses towards the HSC (and not the ATAR).

VET subjects were also studied at about three times the rate in outer regional and remote areas than in major cities, and twice as much in less advantaged areas than more advantaged ones.

Previous studies have shown a similar hierarchy of subjects in Victoria.

It is now generally accepted teachers have the biggest influence on student learning outside the family and home. Our focus to date has been on the quality of teachers, not what teachers are teaching.

This research shows family and home is highly related to what students do at school, overwhelmingly sorting students into subject pathways that reinforce their current place on the social ladder.

The higher your ATAR, the more likely you are to get into a more prestigious university course, which will give you more job options.

We need to look at the way subjects are arranged in the school curriculum, and ensure all students have genuine access to subjects that enhance their post-school options.