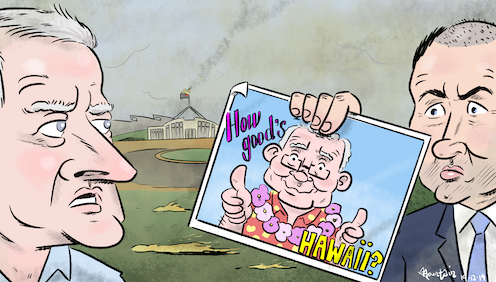 Sorry to have left you all without my guiding hand this week. But Jen and I really needed the break. And the girls too - it’s hard when you’re the kids of the nation’s Daggy Dad.

We were all exhausted. And then came that smoke over Kirribilli – last straw.

I’d hoped to keep my absence nice and private, especially from those quiet Australians fighting fires. (By the way, David, I saw you planned to join your local rural fire service. Great idea. Get yourself pictured fully kitted.)

Regrettably, despite best efforts, my press office wasn’t able to keep a lid on the story. How useless are they!! Just joking. Our media favourites played ball, but as for some others … and social media went mad. I was called such mean things.

TV found the old footage of my criticising then Victorian police chief Christine Nixon’s “bad judgment call” when she dined out during the Victorian fires. Lines for times, I say. As for Lara Worthington’s (née Bingle) “WHERE THE BLOODY HELL ARE YOU???” tweet: Listen Lara, just leave being the smart aleck to me.

Albo didn’t join the pile on. Said it would be “cheap politics”. Clever Albo.

I do admit (in the privacy of this correspondence, which you leak at your peril) it wasn’t such a good look to be out of the country this week.

Still, you put it well on TV, Josh: “He’s having a well deserved break … He’ll be back at work shortly and then he’ll be off to India leading a delegation to advance Australia’s interests.” Made it clear I’ll be slaving in January.

Michael, I loved that as acting PM you celebrated running the country from Wagga. Not a man to get above his station, although a few eyebrows did go up when you said Wagga “is finally the nation’s capital”. Anyway, Wagga has had only a smidgeon of smoke. You could hardly see your hand in front of your face in the actual capital, so my staff told me.

Remember when Doug Anthony used to run the show from a caravan somewhere? Mind you, back then people were told Malcolm Fraser was on hols and even, I think, usually where he was. Often on a motor bike down at Nareen. John Howard loved holidaying at Hawks Nest - so Australian - until too many Aussie battlers started bugging him.

Josh, you did a great job with MYEFO. Those numbers look rather ominous, but you’re always a man of cheer. And Mathias is a rock. Thank goodness he’s denied the silly rumour about pulling the pin.

If he wasn’t there, who’d wrangle Pauline and Jacqui? Have a wine with Labor’s Penny Wong? And the odd beer with Centre Alliance’s Rex Patrick? Mathias certainly needs a holiday.

I’m praying the economic figures turn upwards soon. Otherwise the backbench could be in a funk. Like the Reserve Bank recently, with Phil Lowe talking his head off, often with messages I don’t want to hear. Too much independence. If they were the public service, they’d be to heel by now.

Anyway Joshie, we’ll be okay. If things get bad, if people don’t spend over Christmas, we’ll fit up Albo, blame Labor, and save the day with a stimulatory May budget. But if the economy is indeed at the “gentle turning point” the bank suggests in its rare sanguine moments, you and I will share the glory (just a little bigger slice for me).

Meanwhile do you, as deputy Liberal leader, have any ideas about Angus? I can’t shift him from energy, at least not for a while. But really, he’s a walking fire cracker. (By the way, Josh, some day you must tell me your own tales of Oxford.)

Were you ever a boy scout Josh? What about that cubs’ buddying system? Could we buddy Angus with someone? You perhaps? No? You’ve had enough of all that emissions stuff from Malcolm’s day?

Oh well, let’s all mull over the challenge. We’ll call it the “Taylor project”. Someone might think of something.

It can’t be harder than the religious discrimination project, the good-idea-at-the-time that’s testing Christian. I see Stuart Robert (how good a mate is Stewie!) told The Australian he reads the Bible “cover to cover every year”. Might be easier than reading our revised bill.

Christian, you won’t have an easy new year but, to adapt an old phrase, it will make a minister of you. After you finish with the prelates, you need to get Jackie’s vote on that union bill. My advice: fly to Tassie, source a good red, find the best pizza joint in town. Mathias will prep you.

David, I felt for you this week, trying to deal with state ministers shrieking like banshees at the possibility of changing water policy. Talk about herding wild boars! They’re impossible, all absurdly pursuing the narrow self-interests of their own states. Sometimes federalism just sucks. Pity Malcolm lost interest in that inquiry into it that Tony started.

But David, I must say it was a touch risky to promise those farmers yelling for more irrigation water that you’d hold this review into their grievance (even if it’s headed by an ex-cop and I agreed at the time).

Yes David, I know they were in very big trucks, which can be quite intimidating when they’re outside parliament house. But what if we can’t deliver to them? What if the states put their little feet down? The trucks could return.

Best to get some advice from your new head of department Andrew Metcalfe. You’ll be glad I brought him back to bubbleland. Good man, Metcalfe, with plenty of experience of tricky situations. Ran the immigration department when all those boats were arriving under Labor. Tony sacked him when we won in 2013 – he’d made a few unfortunate reflections on our policy - but all that’s ancient history.

It’ll be a great Christmas for Andrew, enjoying the glow of vindication. Not so good for the departmental secretaries I’ve just dismissed from the bubble. Still, that’s how the cookie crumbles, as they say. If Bill Shorten hadn’t been so hopeless, the quiet Australians could have ousted me.

Then I might have quit parliament and been looking for a post-politics career in the new year.

Back in tourism? Nah. Imagine selling Australia as a destination just now. Even I decided to holiday offshore.

Yours, with authority, Scott

P.S. I have selfies to share in cabinet. They’re classified top secret. For national security, AKA political, reasons.