This is one of our occasional Essays on Health, about one community’s attempt at closing the gap between Indigenous and non-Indigenous health in the Northern Territory. It’s a long read.

You can see the gap driving through the main street of Katherine in the Northern Territory.

The broken shop windows, the dust, the wheelchairs and crutches and bandaged bodies sing out poor health and inequity.

Overcrowding and homelessness are pervasive, and there is very little reprieve from the oppressive heat.

Like many towns of its size, Katherine has its own hospital. Here, social and environmental determinants drive hospital attendance.

For instance, the town has some of the highest rates of homelessness in Australia, in a jurisdiction with the highest incarceration rates, lowest life expectancy and the poorest educational outcomes. The gap in Katherine is a chasm.

Who’s who in the emergency department?

The hospital is a busy place, made even more so by the emergency department frequent attenders who come and go through a constantly revolving door of admission and discharge.

Roughly one-third are very sick, wracked by illness or chronic conditions, almost all underpinned by great social challenges. Despite stereotypes, this is a group that rarely drinks alcohol.

By contrast, grog is a driving force for the other two-thirds, often as a direct result of alcohol and its complications. Once again, illness and social exclusion are pervasive.

Most frequent attenders are Indigenous. They come from around 30 different tribal nations, each with unique language. Most are just three or four generations away from the first wave of colonisation.

Just over two-thirds are homeless, a situation shaped by subtle and ongoing forces of colonisation and subsequent displacement.

Read more: Making space: how designing hospitals for Indigenous people might benefit everyone

Only one-fifth of frequent attenders have access to a car in a town with no public transport (other than school buses). This affects people’s health in the tropics where it’s a long, hot walk from where most Indigenous people live to the pharmacy.

It is really no wonder more than half of frequent attenders have not taken their medicines, contributing to their presentation to the emergency department.

For frequent presenters to Katherine Hospital, poverty and illness go hand in hand. When you are living in an over-crowded house, and the A$20 power card feeding the air conditioner expires on a 43℃ tropical day, when your heart, lungs and kidneys are chronically malfunctioning and the insulin in the fridge slowly warms, the only free number you can call for help is “000” for an ambulance trip to hospital.

These are some of the real-world challenges of closing the gap in Indigenous health. But these challenges can be overcome.

We have recently published evidence of how a locally driven program can make a difference.

When some of the town’s most vulnerable people attend the emergency department, the program connects them to primary care and other supports. It also tackles underlying drivers of hospitalisation such as homelessness or inadequate housing. 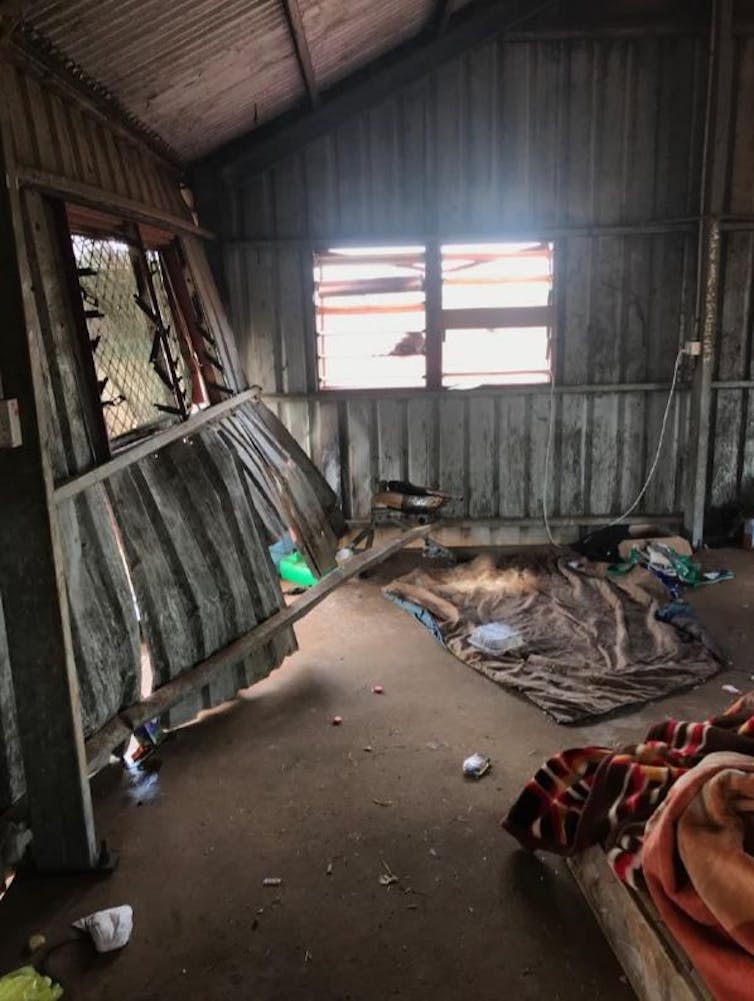 At the emergency department, people are supported to move away from inadequate housing, as well as being treated for their physical or mental illness. Author provided

The referral point taps into a critical moment when people choose to turn up to hospital, asking for help.

This an opportunity to do things differently. As such, the program re-defines “help” beyond the biomedical paradigm, to both improve health and use limited resources more efficiently.

This contrasts with past approaches grounded in discipline and law that have failed to meaningfully help people who suffer the combined disharmony of sickness, homelessness and alcohol.

Among the 109 people supported in the first ten months of the program, there was a 23% reduction in emergency department presentations.

A Grattan Institute report found the most disadvantaged people living in the remotest areas are the least likely to see or have access to a GP.

In Katherine, many of the people presenting frequently to the emergency department with chronic diseases would benefit from being managed by their GP or other primary care provider.

As a result of the program, there was a 90% increase in GP attendance.

The program has been developed gradually over the past five years, first with an understanding of who the hospital’s frequent attenders are, and then getting the community on board.

Central to the program’s success is this community support. The four main partners include the hospital, the Wurli-wurlinjang local Aboriginal health service, the local Aboriginal housing organisation and Katherine Regional Aboriginal Health and Related Services.

Other partners including the first ever homeless hub in Katherine (a drop-in centre and community space for homeless people), as well as St John Ambulance, Mission Australia, Red Cross and the territory housing department.

Read more: Refugees in their own land: how Indigenous people are still homeless in modern Australia

The harsh reality of the town camp

Just off Katherine’s main drag is a patch of thick scrub that shields visitors from seeing the harsh realities of Warlpiri Transient Camp. This is where many people who frequently present to the emergency department live.

Up to 20 people live in small dwellings bursting at the seams. These structures often provide meagre refuge to people on dialysis, with failing hearts from rheumatic heart disease, and to the elderly and frail. 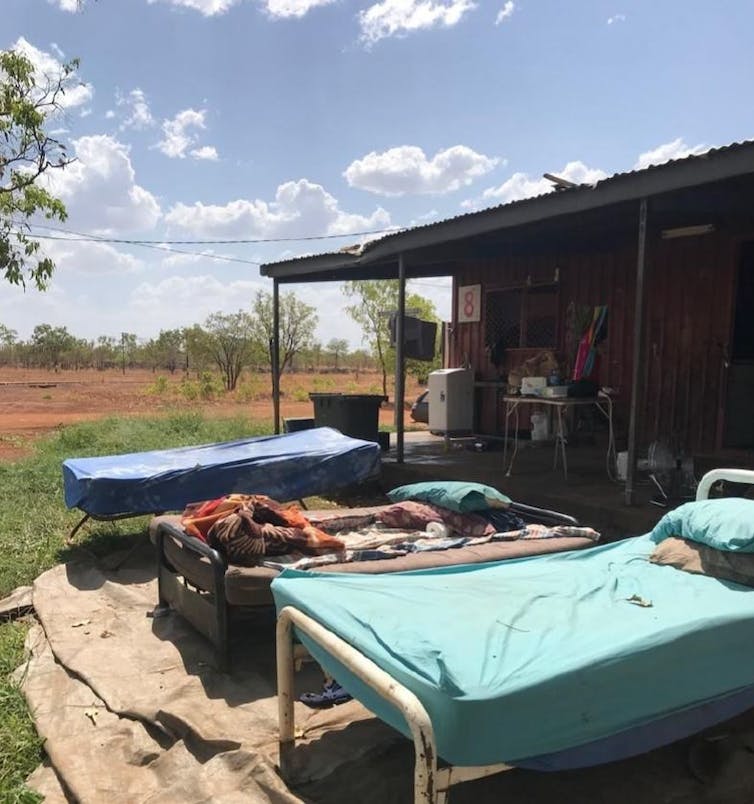 Up to 20 people live in small dwellings bursting at the seams, some without electricity never mind air-conditioning. Author provided

Only a handful of these dwellings are air conditioned; some don’t even have electricity. Often it is sickness that drives people from ancestral lands into bigger towns like Katherine to access health services like kidney dialysis.

But housing is less available than dialysis. And the camp is not a destination of choice.

Our analysis of the program demonstrates some striking features of people who live in the camp and who frequently attend the emergency department.

First, they are very sick. Almost 10% had died before the end of the first year of the program. Participants had an average of 2.8 significant health problems, many fold higher than the Australian average.

Three out of five didn’t have reliable access to enough affordable, nutritious food. Almost one-third had chronic kidney disease, and 10% were on dialysis. Of the 11 people needing dialysis three times a week, eight met the Australian Bureau of Statistics’ definition of homelessness; three were living in a tent.

Needless to say, nowhere else in Australia is it imaginable that someone sick enough to require dialysis has to live in a tent in temperatures regularly above 40℃.

Read more: Explainer: what is chronic kidney disease and why are one in three at risk of this silent killer?

A safe home, a working fridge and a good education

Modern western medicine is the icing on the cake of a healthy and meaningful life. For people who do not have even the most fundamental building blocks of a normal urban existence, like the vast majority of people in this trial, applying western medicine is like icing a cake that has not yet been baked.

A safe home, a fridge that remains powered and relatively stocked, access to transport, and a good education, are ingredients that need to be slowly and systematically put together over a lifetime for western medicine to be an appropriate first step in resolving an individual health problem.

Applying a biomedical model of emergency care is nothing more than a very expensive band aid. But emergency departments can be structured in innovative ways to make a much bigger difference.

Read more: To close the health gap, we need programs that work. Here are three of them