A partial solar eclipse will occur across northern Australia on December 26. During the afternoon, the Moon will pass in front of the Sun, partially blocking the Sun’s bright light.

The eclipse will take place north of Geraldton (WA), Alice Springs (NT) and Townsville (QLD). These towns will barely witness the eclipse, as from their vantage point the Moon just skims past the Sun’s outer limb.

Further north, the Moon will hide more of the Sun. For Australia, Darwin will experience the greatest eclipse, with up to 31% of the Sun’s area blocked by the Moon.

However, there won’t be any noticeable effects to let you know that the eclipse is occurring. The daylight will appear just as bright – it doesn’t begin to dim until around 80% or more of the Sun is blocked out. 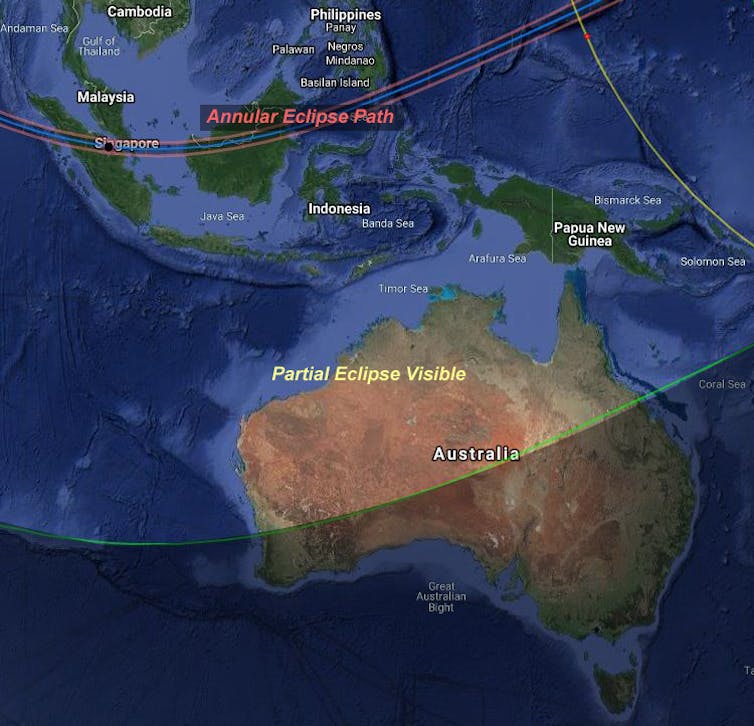 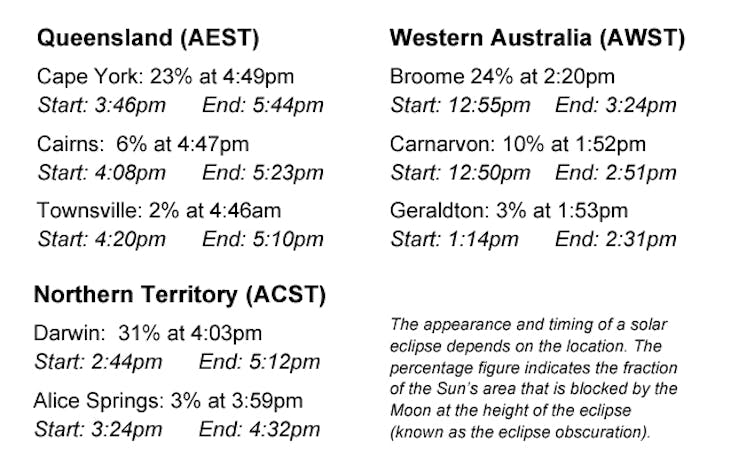 To view the eclipse, be sure to take the necessary precautions to see it safely, without risking your eyesight. Most importantly, never look directly at the Sun. The timings and appearance of the eclipse for other locations can be found at timeanddate.com. Ring of fire Australia’s experience of the eclipse is relatively modest because we lie on its outskirts. The main event is happening further north, in a narrow band stretching from Saudi Arabia, through southern India, Sri Lanka, Malaysia and out to the island of Guam. View the eclipse from within that band (including the city of Singapore), and you will see a special type of solar eclipse known as an annular solar eclipse. 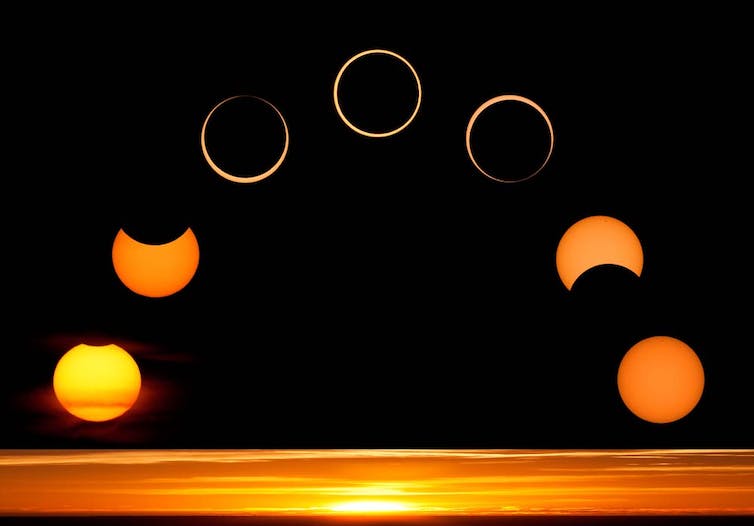 Ring of Light in Outback Australia, Northern Territory, May 2013. Noeleen Lowndes During an annular solar eclipse the Moon passes directly in front of the Sun - as it does during a total solar eclipse - but in this instance, the Moon is too small to fully obscure the Sun from view. Instead of eclipsing or hiding the Sun, the Moon turns the Sun into a spectacular ‘ring of fire’ that encircles the dark Moon. It’s a quirk of nature that Earth has a moon that is the right size (about 400 times smaller than the Sun) and is at the right distance (about 400 times closer to Earth than the Sun is) for a total solar eclipse to occur. But since the Moon follows an elliptical orbit around the Earth, its distance varies slightly throughout its monthly orbit. If the Moon happens to be at or near the most distant part of its orbit during a solar eclipse, then the Moon will appear slightly smaller in the sky leading to an annular solar eclipse. How to see the eclipse A way to see the eclipse - while protecting your eyesight - is to project an image of the Sun onto another surface. This also works as a great way to share the moment with others and to enable younger children to share in the experience. 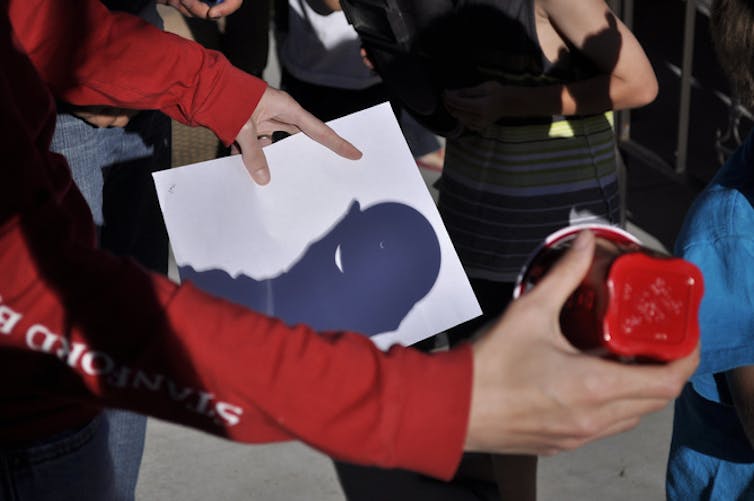 Share the view, with this easy to make and effective pin-hole camera. Sid/flickr Make a small hole in the bottom of a plastic cup (or piece of cardboard) and with your back towards the Sun, hold the cup so that sunlight passes through the hole and onto a flat surface such as a piece of paper or a wall. The image of the Sun will be small and faint. But it is generally enough to show that the Sun is no longer a complete circle. It works especially well if you track the changing shape as the eclipse slowly progresses. 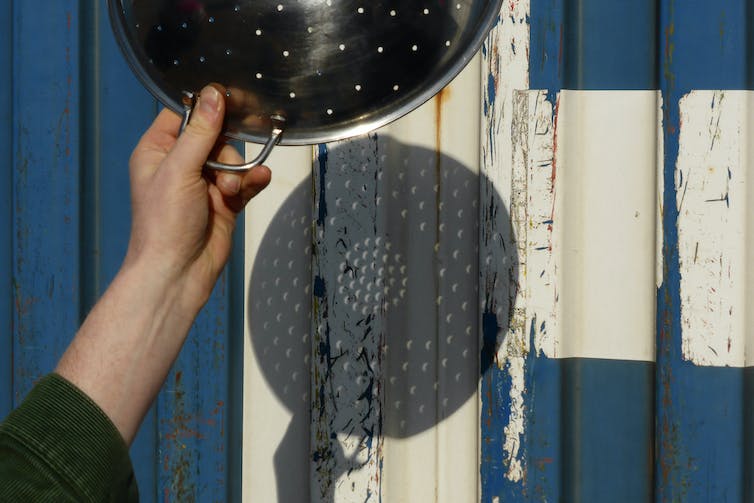 A colander is a ready to use pin-hole camera, creating many pretty images of the eclipsed Sun. John Lord/flickr Specially designed eclipse glasses can be used to look at the Sun directly as they block out most of the light. Make sure they fit well and there are no scratches or other signs of wear or tear. Also it’s important to remember (especially for children) to look away from the Sun before putting on or taking off the glasses. Eclipse glasses can also be used to look for large sunspots – dark spots or blemishes on the Sun’s surface that are slightly cooler than their surroundings because of strong magnetism. These spots appear quite small but are typically larger than the Earth – an incredible reminder of just how big the Sun truly is. However, don’t be surprised if you see a blank Sun with no spots at all. We are currently in a deep solar minimum. As I write, the Sun has had no sunspots for over a month. In fact, 2019 has broken the known sunspot record – more than 270 days this year have featured a blank Sun, without any spots. That’s more than any other year since the Space Age began. You can follow spaceweather.com to track the daily sunspot count. Save the date This is the third solar eclipse for the year. But while they happen fairly regularly, you must be in the right location to have the full experience. For any specific location, it can be years between partial solar eclipses or centuries can pass between total solar eclipses. Some may remember the total solar eclipse that occurred over Melbourne in 1976 or the more recent one over northern Queensland in 2012. Australia’s last annular eclipse was seen in Western Australia in 2013. The next total solar eclipse for Australia will occur in April 2023. The band of totality will just clip Australia near Exmouth at the tip of the North West Cape in Western Australia. However, the eclipse worth waiting for will occur on July 22, 2028. Totality will stretch across Australia, from the top of Western Australia down through New South Wales, passing directly over Sydney. That will be an amazing sight to see.