Where once we shared slideshows post trip and saved prints and postcards as keepsakes, we now share holiday images and selfies from the road, sea or air — expanding the “tourist gaze” from the traveller to include remote audiences back home.

Travelling has gone from a solitary quest to a “social occasion”. As such, gazing is becoming inseparably linked with photography. Taking photos has become habitual, rendering the camera as a way of seeing and experiencing new places.

Travellers take selfies that present both locations and people in aesthetically pleasing and positive ways.

Indeed, the “instagrammability” of a destination is a key motivation for younger people to travel there - even if filters and mirrors have been used to create a less than realistic image.

The urge to share travel imagery is not without risk. An Australian couple were released from detention in Iran in October, following their arrest for ostensibly flying a drone without a permit.

Other tourists earned derision for scrambling to post selfies at Uluru before it was closed to climbers.

Meanwhile, there is a sad story behind the newly popular travelgram destination Rainbow Mountain in the Peruvian Andes. It has reportedly only recently emerged due to climate change melting its once snowy peaks.

To understand the way social media photography impacts travelling, we undertook an exploratory study of overnight visitors at zoological accommodation in lavish surrounds.

We divided 12 participants into two groups. One group was directed to abstain from posting on social media but were still able to take photos. The second group had no restrictions on sharing photos. Though the numbers were small, we gathered qualitative information about engagement and attitudes.

The study confirmed that the desire to share travel pictures in close to real time is strongly scripted into the role of the tourist; altering the way travellers engage with sites they are visiting, but also their sense of urgency to communicate this with remote audiences.

Pics or it didn’t happen

Interviewer: Did you look at your social media throughout your stay or did you refrain?

Mandy: A bit yeah. But even then, probably not reading it as much as I often would. I don’t think I commented on anything yeah.

Amy: Even today when we put something up [after staying at the Zoo] about the things we’d done today and only a few people had liked it, there was that little bit of disappointment that ‘Oh more people haven’t liked my post.’ Where we didn’t have that for the previous 24 hours [because of the experiment] … because nobody knew about it. 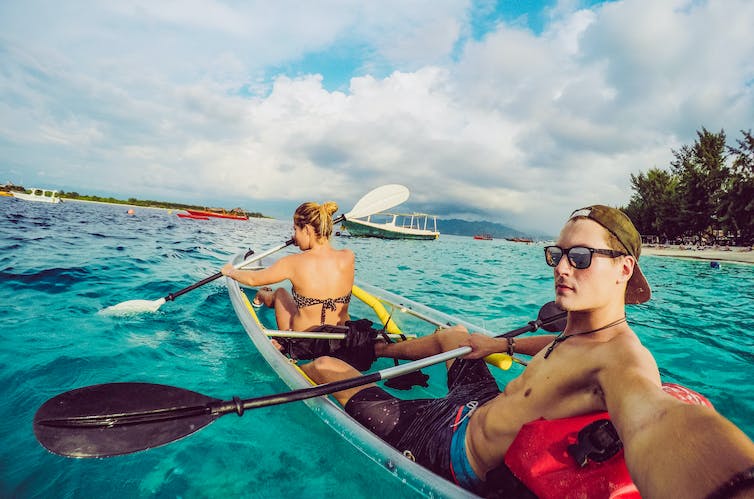 The tension between capturing and experiencing travel is ever-present. Shutterstock

The desire for social media recognition resumed after leaving the zoo. For Michelle, posting after the experience presented new concerns:

Interviewer: How did you feel about not being able to post?

Michelle: Spanner in the works! For me personally not being able to post was a negative experience because I wanted to show people what we’re doing, when we’re doing it.

And I also feel, like a couple of people knew we were going to the zoo, right, and knew that we couldn’t use social media. So, when I eventually post it, they’re going to go, ‘She’s been hanging on to those and now she’s posting them and that’s just a bit weird.’ Like, to post it after the event. Everyone normally posts it in real time.

Later, Michelle commented that withholding content from posting to social media also diminished a part of the experience itself:

I sort of feel like if we don’t share the photos it’s like a tree fell down in the forest and no one heard it, like, we’ve had this amazing experience and if I don’t share them, then no one’s going to know that we had this experience, you know, apart from us.

Digital photography and social media transform the relationship between the travelling self and its audience, as individuals have an expanded — and potentially diversified — audience.

Selfies in tourist contexts reflect the tourist gaze back at the tourist, rather than outward.

The perfect digital postcard now incorporates the self centrestage. As one participant suggested:

Shannon: It almost feels like it’s kind of an expected behaviour when you are doing something touristy … We’ve actually had tour guides before … kind of a bit disappointed if you don’t take a photograph.

The purpose of photography has shifted from a memory aid to a way of sharing experience in the moment. There is tension now between the need to capture tourist experiences for digital sharing and individual engagement in the tourist activity. Decrying the desire to use photography as a way of communicating experience will not constructively address this tension.

Digital engagements have become a defining part of travel, and organisations should be encouraged to promote online sharing of experiences — phone charging stations and photo competitions were two suggestions offered by our interviewees.

In contrast, device-free days or activities could be another way to encourage face-to-face engagement and prompt tourists to be more considered with their online sharing.