Evocative images of volunteer firefighters fill our newspapers and television screens. As we look with gratitude into their ash-stained faces, we want to see a modern-day hero looking back at us.

But firefighters don’t want us to see heroes, because calling them heroes overstates their ability to control fires and downplays the long-term psychological impacts of fighting fires.

That’s what we’ve learned after interviewing Black Saturday firefighters ten years after the tragedy, as part of an ongoing research project exploring the role of memory and commemoration in organisational planning.

Read more: As bushfires intensify, we need to acknowledge the strain on our volunteers

As we listen to their recollections of that day, there is no doubt they engaged in heroic acts and need to be remembered for their bravery. But when we laud firefighters as heroes, we fail to acknowledge the ongoing impact of the fires. As one firefighter told us:

Each year on the Black Saturday anniversary every community group wanted to have a thank you event and they were getting frustrated by the firefighters not turning up.

What they couldn’t understand was what the firefighters were physically and mentally going through at that time.

Memorials do the remembering for us

Government funding for firefighting needs to make provision for counselling services for firefighters dealing with the long-term psychological effects of fighting fires.

Several firefighters talked about “deliberately trying not to remember because it is so difficult”. For others, remembering together was part of the healing process.

After the 10th anniversary, I had a bit of a meltdown. We’d arranged a gathering of that group of people who were very close on the day and I wasn’t going to go. I just had a picture of myself sitting in the corner crying my eyes out all night and it’s the first time that group had come together since the first anniversary and as it turned out it was brilliant.

It was exactly what we needed. It was a very close group of people who had a lot of trust in each other.

Over the past decade, memorials have been erected in communities affected by the Black Saturday fires. But firefighters we spoke to were concerned that creating memorials allowed communities and authorities to relegate the fires and their impact to the past.

Scholars of commemoration have observed that giving monumental form to memory can enable us to divest ourselves of the obligation to remember. It’s as if the memorial does the remembering for us. 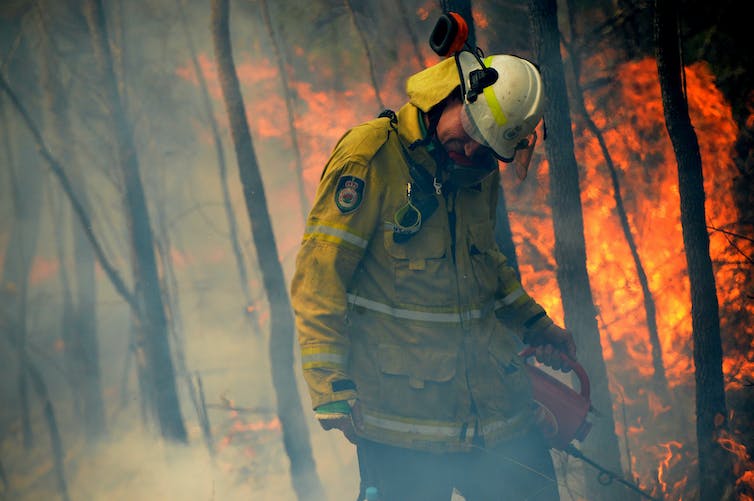 Firefighters are battling unprecedented blazes around the country. We should remember their bravery without overstating their ability to fight fires. AAP Image/Jeremy Piper

Rather than building memorials, firefighting organisations need to commemorate through forms of collective communing, where knowledge is shared by older, experienced hands with new firefighters.

This communal commemoration could build on the informal forms of commemoration that firefighters told us they prefer – sitting around the fire truck, sharing stories. Staff rides, for instance, a tactical walk retracing the steps of those involved in a major fire, is an effective way of passing on knowledge while also remembering and honouring the work of firefighters.

Making sure it never happens again

Black Saturday firefighters we spoke to urged memorialisation to elicit a call to action.

Memorials do have a profound effect. The Kinglake memorial for me is extremely powerful in terms of reminding us of the scale of the tragedy, the names – I can still picture the faces. It is deeply emotional and powerful.

But how we can translate that powerful emotion into a resilience and a determination to make sure it never happens again?

Firefighters don’t want a roll call of heroes, but for communities to remember the lessons we have learnt from past fires and to ensure they have a bushfire plan and to heed warnings to leave.

As one firefighter said about the Black Saturday anniversary:

It should have been an opportunity to remind people of the dangers of bushfires and what can happen and the limitations of an organisation like ours, and to use that in a positive way to reinforce future preparedness rather than constantly looking back at the tragedy and not learning anything from it.

It was a national tragedy owned by everybody and we should be able to build up a cultural memory.

Collective memory carries an ethical obligation. In commemorating firefighters as heroes, we can fall into the danger of overstating their ability to control fires, absolving ourselves of responsibility.

Read more: 70 years before Black Saturday, the birth of the Victorian CFA was a sad tale of politics as usual

Rather than simply valorising and memorialising firefighters as heroes, all levels of governments need to accept responsibility for their role in mitigating future bushfire impacts.

This means ensuring the landscape is managed appropriately, that our firefighters have the resources to fight fires, and that there is effective, science-based climate policy.