Frank Jotzo, the director of the Centre for Climate and Energy Policy at Australian National University, has some constructive advice for Prime Minister Scott Morrison in a column today for the ABC: do not waste an opportunity to recalibrate his government’s approach on climate change.

Morrison should heed Jotzo’s suggestion that he and his cabinet need to “drop the old anti-climate change stance”. As Jotzo writes,

You’ve been politically locked into a no-action position, but the bushfires give you the reason to change […] You can make it your mission to protect the country from harm, an essential conservative cause.

Jotzo speaks with authority as one of the country’s foremost experts on climate reduction policies. He has a global reputation.

Whether Morrison is capable of a course correction on climate change and, in the process, yield on an issue he has used to wedge his political opponents remains to be seen. However, he would be unwise to pretend that once the immediate bushfire danger passes and the smoke clears, the country will return to normal politically.

The nation will expect – indeed it will demand – that any government, conservative or Labor, face up to what is the new normal of a drying continent rendering human settlement increasingly vulnerable to extreme weather. Failure to do so will exact a heavy political price. 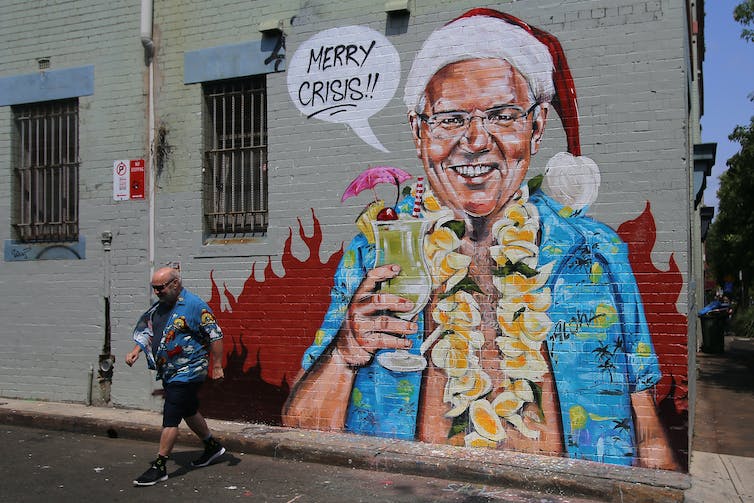 Scott Morrison’s holiday trip to Hawaii immediately came under fire from those who accused him of being out of touch with fire victims. Steven Saphore/AAP

The prime minister insists he has not denied there is a link between climate change and bushfires, but at best his responses on the subject have been evasive and self-serving politically.

Pressed on the issue, his fallback position is to say

I am sure you would also agree that no response by any one government anywhere in the world can be linked to one fire event.

That might be true, but it is hardly the point in the wider scheme of what measures might be adopted to address problems of a sluggish response to the bushfire emergency.

Morrison and others in his government might also go easy on claims that local opposition to back-burning in native forests contributed to the fires. This is a coded attacked on the Greens and is not supported by the evidence.

When in doubt, politically you might say, blame the Greens.

Memo to Scott Morrison: people are fed up with politics proving to be a constraint on the development of a credible and sustainable climate policy that involves reasonable transitional steps to a low-carbon economy over time.

As such, he might also drop his claim that calls to reduce carbon emissions are “reckless”.

Where the prime minister is particularly vulnerable – this will be subject studied closely by any future commission of inquiry – lies in his refusal to meet a group of former emergency services leaders calling itself Emergency Leaders for Climate Change.

In April, the leader of the group, Greg Mullins, a former commissioner of NSW Fire and Rescue, wrote to Morrison warning him of the threat of “increasingly catastrophic extreme weather events”.

In September, this expert group wrote again to the prime minister asking for a meeting.

They received no constructive response.

Likewise, academic warnings about risks of climate-induced extreme weather events have been ignored.

In a March 2019 report for the Australian Strategic Policy Institute, ANU professor Robert Glasser called specifically for a national strategy to deal with climate disaster preparedness.

More than 500 Australians, about the same number who died in the Vietnam War, die each year from heat stress alone. The annual economic costs of natural disasters are projected to increase to A$39 billion by 2050, which is roughly equivalent to what the Australian government spends annually on defence.

Bear in mind Glasser’s report was written before these Christmas-New Year bushfire disasters.

We need to begin preparing now for this changing climate, by developing a national strategy that outlines exactly how we move on from business as usual and adopt a more responsible approach to climate disaster preparedness.

This bring us to issues surrounding the PM’s own leadership during the crisis.

Rosemary Williamson of the University of New England concluded a useful survey of Australian prime ministers’ responses to natural disasters last year with these words:

Australians will expect prime ministers to come and see for themselves, to demonstrate empathy and to instil confidence in recovery.

If these are the benchmarks for prime ministerial behaviour during a crisis brought on by disaster whether it is flood, fire or cyclone, Morrison has not lived up to these expectations.

First, he was – inexplicably - out of the country on holiday while uncontrollable fires began ravaging his home state of New South Wales.

Second, he has had trouble demonstrating reasonable empathy for victims of the fires.

And third, he has had difficulty accepting the Commonwealth had a shared responsibility for assisting the states in coping with the fallout from arguably the worst natural disaster in Australian history.

What has been most surprising is the time it has taken for Canberra to understand that such are the dimensions of this disaster that military assistance was necessary.

Weeks passed without the Australian Defence Force (ADF) being called out. The explanation for this delay is that states had not asked for military involvement, as if the out-of-control bushfires themselves respected state boundaries – or Commonwealth-state relations.

Coordination between Canberra and the states has improved in recent days, but in the early stages such cooperation left much to be desired.

In all of this, it is clear Morrison has laboured under a constraint of not wanting to antagonise the climate-sceptic right of his party by immediately conceding that global warming and bushfires are linked.

This would explain his tardiness in acknowledging the extent of the disaster.

Politically, he may well believe that climate remains an important point of difference between parties of left and right.

Read more: Mr Morrison, I lost my home to bushfire. Your thoughts and prayers are not enough

Debate over climate – whether it is changing, and if so what to do about it – has become a culture wars issue over the years to the point where it has proved to be a useful political device for parties of the right.

As a politician of the right, Morrison would be reluctant to yield ground on issues to do with electricity prices that might benefit him politically in the future.

These are the political considerations that would be weighing in his calculations. 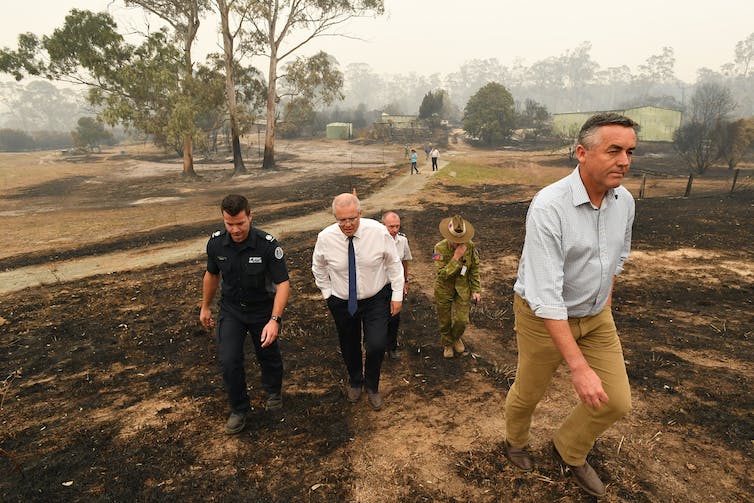 However, the ground is shifting politically.

Polls indicate the environment is assuming greater importance among Australians. It is not far behind the economy and health in people’s concerns, according to an exhaustive poll conducted by the ANU’s 2019 Australian Election Study.

Among issues that will burden governments – both federal and state – over the next months will be the heavy costs associated with cleaning up the mess. All up, costs will run into the billions given the dimensions of destruction.

Whatever economic fallout ensues, the political costs for the prime minister will continue to weigh heavily.

He would do himself a favour by advancing a credible climate and land management policy that ensures the country is better prepared when the next disaster strikes, as it surely will.