While there is much speculation about the cause of the Ukrainian airliner that crashed after take-off from Tehran’s airport this week, killing all 176 people on board, there is presently very little factual information to go on.

Western intelligence has indicated a surface-to-air missile likely hit the plane in what may have been an “unintentional” act – an assertion Iran quickly dismissed.

As with any other crash, the world aviation community needs to know what caused this one in the interest of ongoing flight safety.

Political tensions between Iran and the US may make the investigation more challenging, but they should not prevent a thorough systematic analysis from occurring and the cause of the crash to ultimately be established.

Read more: Iran and US step back from all-out war, giving Trump a win (for now)

The flight recorders hold the key to establishing what actually happened and why. And here’s where the political tensions are most problematic – Iran initially said it would not hand over the black boxes to the manufacturer of the aircraft, Boeing, or the US.

But new reports say Iran has now invited the US National Transportation Safety Board and Boeing to take part in the investigation. 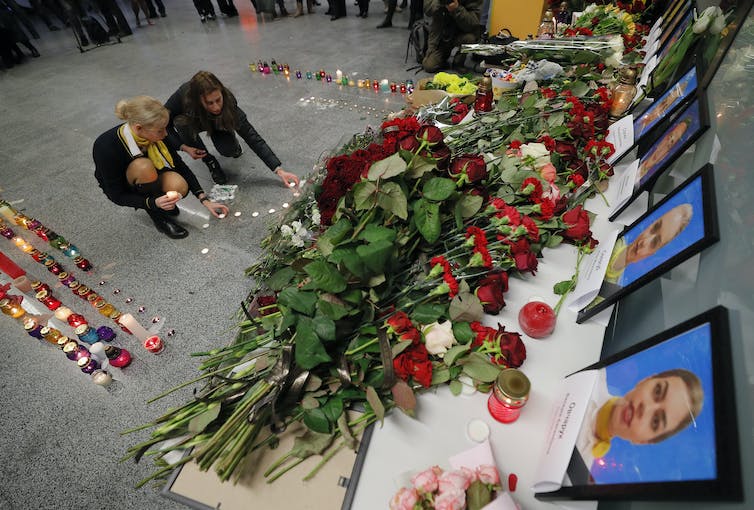 Families and friends of the victims of the crashed Ukraine airliner light candles at Kiev’s airport. SERGEY DOLZHENKO/EPA

Under the International Civil Aviation Organisation Annex 13 convention, the US has the right to appoint an adviser to the investigation, as does the aircraft manufacturer. The convention presumes a level of cooperation between all parties involved in crash investigations, which could prove difficult in this case. But that doesn’t necessarily mean a proper investigation won’t or can’t be conducted.

Responsibility for the investigation sits with the Iranians, but under the UN Civil Aviation Conventions, they can request assistance from any other country, if they don’t have the capacity to conduct it themselves.

There are many other countries with the necessary expertise to assist, including recovering flight data from recorders with very significant damage. France, Canada, UK, the Netherlands, Germany and Australia could all help, for example.

Other countries can only step in, however, if invited by Iran or if Iran chooses not to conduct the investigation.

What’s most important is that whoever leads the investigation must have access to all the information – the wreckage itself, flight data, radar data, maintenance records, crew data, flight plans, load sheets, and passenger and cargo manifests. Otherwise, the wrong conclusions can be reached.

Why is a field investigation important?

There also needs to be a parallel field investigation analysing the wreckage.

First, investigators should be ensuring they have accounted for all the wreckage. If some parts separated from the aircraft in-flight, they may be found some distance from the main wreckage site and may hold key clues that could lead to a better understanding of the cause of the crash.

As such, the terrain under the flight path needs to be surveyed carefully to locate all items from the aircraft.

Clearly, it will also be important to examine the wreckage of the engines for any evidence of pre-crash damage.

For example, if a fire had been burning inside the engine cowling, there may be evidence of scorching. Analysis of the internal engine components should also make clear whether the engines were still delivering power when the plane made impact with the ground or if there was a pre-crash structural or component failure.

Investigators should also look at the wing and fuselage surfaces next to the engines for any pre-impact damage. If an engine failure occurred, there may be evidence of impact damage from engine components after they burst out of the armoured casing.

This was the case with the fatal Air France Concorde crash in 2000, as well as the uncontained engine failure that nearly caused Qantas flight QF32 to crash en route from Singapore to Sydney in 2010.

Can evidence show if a missile hit the plane?

Analysing the aircraft engines, wing and fuselage surfaces may also provide evidence if the aircraft was struck by a missile.

This was the case with Malaysia Airlines flight MH17, which was shot down over Ukraine in 2014, killing all 298 people aboard. There was clear evidence of the aircraft structures being penetrated from outside the plane by high-speed particles.

Similar forensic analysis can be conducted on the remnants of the Boeing 737 in Iran, even if a high degree of fragmentation occurred in the crash. This should reveal the truth if a missile was responsible.

Read more: MH17 charges: who the suspects are, what they're charged with, and what happens next

Would Boeing’s exclusion hurt the investigation?

Of course, it would be usual for the aircraft manufacturer to be involved. After all, it knows more about the technologies involved in building and operating the aircraft than anyone else.

That said, there are many global agencies that also know a lot about the engineering and operation of the B737-800 plane, such as the airworthiness authorities in other countries, who could be called upon to participate.

No doubt, Ukraine will be heavily involved, as will Canada, due to the number of Canadians who lost their lives in the crash. So, if Boeing was excluded from the investigation, it might be a set-back, but not a show-stopper.

Boeing is, however, responsible for assuring the ongoing safety standards for the global B737 fleet, so whether it is directly involved in the investigation or not, it is imperative the reasons for the crash are shared with global aviation agencies, the manufacturer and all other airlines.

It is worth reflecting in these sad occasions that the purpose of a crash investigation is to prevent future incidents. Unless the actual cause of this crash is understood, any possible problems in the global flight safety system may go unrectified, making the risk of future crashes higher than it otherwise would be.

The impact of the crash on the families of the victims is also immense and immeasurable. This is another reason why a proper, thorough and systematic investigation is so important. It ensures those who have tragically lost their lives, and their families and friends, will not have suffered in vain.