When Formula 1 announced late last year that the sport would be carbon neutral by 2030, the organisation’s chief technical officer spoke of the transition to a lower carbon world:

F1 could play a huge role in this transition. It has continually proven its ability to advance technology readiness levels from experimental to production and must do so again. It also has the profile to engage the public in these technologies. The difference this time is that it doesn’t have an option. Failure to reduce CO₂ emissions will leave the sport as a pariah with no place in modern society.

F1 has promised a move to “credible offsets and breakthrough CO₂ sequestration programs”. When asked what that would entail, a spokesman for F1 told The Conversation:

We will be looking at tree planting, which is a highly effective biological way of capturing carbon from the atmosphere. We will also be working with our incredible scientists and engineers in the sport to develop breakthrough carbon sequestration innovations that are applicable not just to F1 but to the wider world. This could include technology around carbon sinkholes and materials that extract carbon from the atmosphere […]

We will ensure we have ultra-efficient logistics and travel and 100% renewably powered offices, facilities and factories, improve the sustainability of race events, targeting 100% reused, recycled or composted waste by 2025 and move to 100% Second Generation Advanced Sustainable Fuels in F1 cars by 2030.

We should welcome any effort to address climate change. But promises to “look at” tree-planting and develop innovations speak to a persistent lack of clear detail in the how, what and where.

Formula 1’s contribution in the past – and future

Much of the fuel-efficient technology developed for F1 is passed down into everyday car production, contributing to cleaner vehicles that can run for longer on less. With over a billion cars on the road globally, that’s a really positive contribution.

But despite goals to “move to F1 cars running on 100% advanced sustainable fuel” the fact remains that the F1 is committed to the internal combustion engine, a major contributor to emissions. 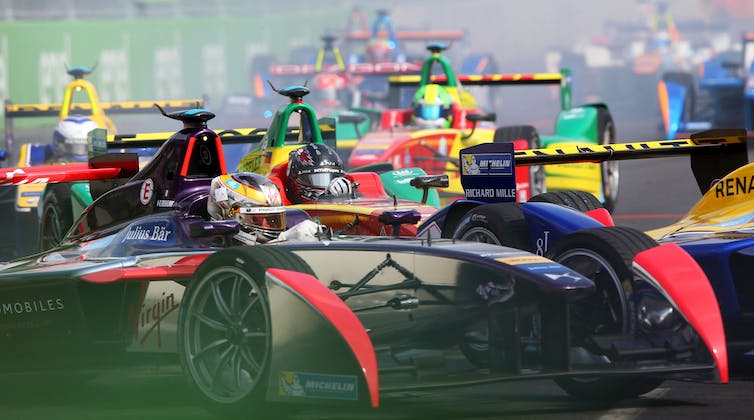 Read more: Formula One motor firms are becoming textbook cases in how to successfully branch into other sectors

It’s not just the car emissions

According to its own assessment, Formula 1 emits about 256,000 tonnes of CO₂e in a race season.

Readers can see a pie-chart showing the breakdown of emissions sources for F1 here. You may be surprised to learn that the biggest contributor to F1’s carbon footprint is not the cars themselves.

“Power unit emissions” – meaning “all emissions associated with the fuel usage of the power units across all ten teams, at all 21 Grands Prix, and at pre-, mid- or post-season testing” comes to just 0.7% of its annual emissions.

Excluding power emissions, just 7.3% of its emissions are attributable to the operations of events (including broadcasting, support races, circuit energy use, generator use, and operation of a hospitality package known as Paddock Club).

In fact, international travel and logistics required to put on the race comprise 72.7% of the total F1 series carbon footprint.

Achieving net zero emission within an international Grand Prix structure that will host a record 22 races in 2020 and involve at least ten teams is a significant challenge.

The F1 says it will move to “ultra-efficient logistics and travel and 100% renewably powered offices, facilities and factories”.

And then there’s the promised move to “credible offsets and breakthrough CO₂ sequestration programs”.

Critics of this approach suggest that offsets – such as tree planting – are little more than a band aid since they fail to create real change. 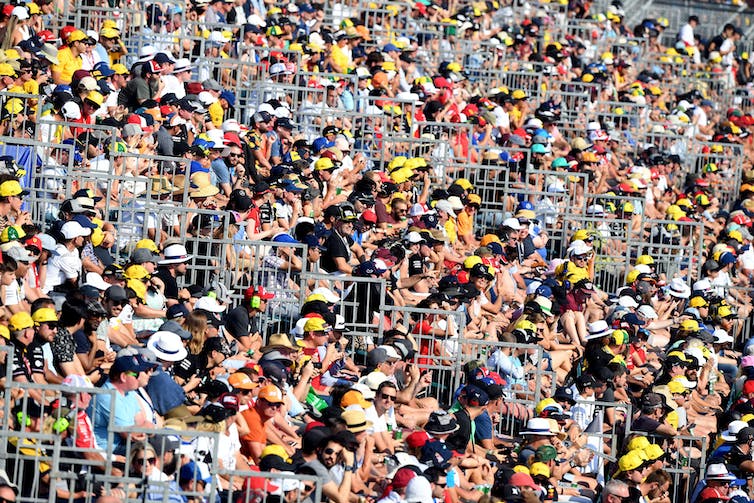 There is growing awareness among fans, sponsors and athletes about the carbon footprint of their sport. JULIAN SMITH/AAP

There is growing awareness among fans, sponsors and athletes about the carbon footprint of their sport. Lewis Hamilton, six-time F1 world champion champion, received both applause and criticism when he announced plans to personally become carbon neutral by the end of 2019.

As younger fans shift to the Formula E format which promotes electric vehicles, and revenue falls, F1 must be feeling the pressure to keep up.

It’s good F1 is contributing to a broader conversation about ways international sporting competitions can seek to reduce the negative environmental impact they have. It is likely the move will also result in technology that will have a positive effect outside the sport.

However, fans, sponsors, journalists and other F1 observers must demand greater detail on how the sport plans to achieve its ambitious goal by 2030.