In the first decade of the 20th century, Australians were focused on the future. It was the dawn of a new century, and of a newly formed nation.

Perhaps this forward outlook was part of why fortune-telling was being heralded as the latest “craze” in local newspapers. Fortunetellers populated market stalls, shop arcades, travelling sideshows, private homes, society parties and even church fetes as they used teacups, crystal balls, cards or spirit guides to peer into people’s futures.

Yet fortune-telling was illegal under laws inherited from England. Some feisty futurists challenged the legality of these anti fortune-telling provisions. In response, during the early decades of the 20th century legislators around Australia affirmed fortune-telling’s criminal status in statutory law.

It was only in the 21st century that most Australian jurisdictions repealed these laws. Even today, telling fortunes for payment remains a crime in South Australia and the Northern Territory.

According to Australian newspapers in the 1900s, the main “victims” of this pretence were women. Paternalistic editorials argued for police crackdowns on fortune-telling in order to protect “members of the weaker sex” from themselves.

An extract from ‘Making a Fortune’, an episode of the podcast History Lab, from Impact Studios at the University of Technology, Sydney.

While men also visited fortunetellers, they were portrayed as doing so less often, and usually to seek answers to practical inquiries about investment opportunities or locating lost property. Women’s reasons for visiting fortunetellers were represented to be more frivolous, and rooted in innate female character defects.

Women apparently became hooked on visiting fortunetellers due to preoccupations with romance and gossip, or because their “neurotic impulses” left them credulous.

Newspapers warned of the dangerous repercussions fortune-telling might have for “weak-minded women”. Suburban matrons were accused of frittering away household funds on charlatanism.

It was joked that housemaids would quit their jobs on the basis of prophecies of rich husbands soon to come. Marriages were said to be breaking down as clairvoyants confirmed wives’ suspicions about their husbands’ infidelity, or counselled them that separation would bring brighter prospects.

It was also feared that fortunetellers provided a conduit to abortionists and contraceptive information for women worried that their future would bring children conceived outside wedlock or that they could not afford.

Yet, for many, a visit to a psychic was probably simply an affordable entertainment in an era before the “talkies”, much less Netflix, arrived. For others, fortune-telling consultations perhaps provided a positive outlet where they could talk through emotional life events; a kind of informal counselling long before such services became available. 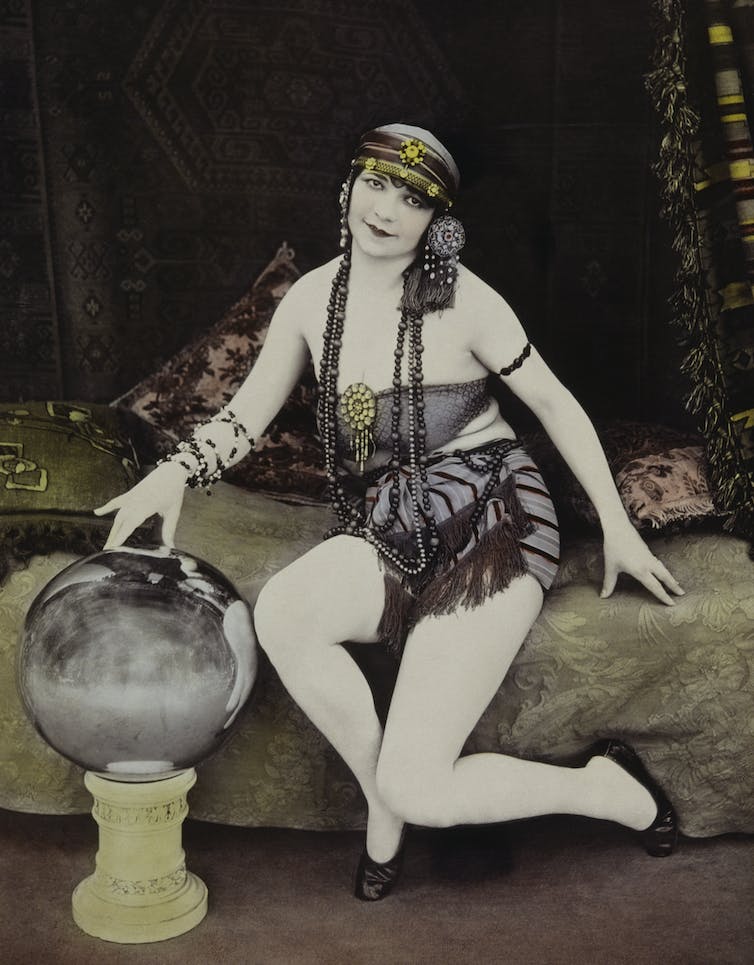 Long before ‘talkies’, fortune-telling was an affordable entertainment. Shutterstock

The typical cost of a psychic reading during the Federation period was two shillings sixpence (equivalent to the price of a film ticket now). A clairvoyant with a few dozen regular clients could expect to earn around four pounds each week, twice the average pay of a domestic servant.

Some celebrated seers earned considerably more. By the time of her 1928 death, Mary Scales, an illiterate laundress turned fortuneteller, had amassed a fortune that would be the equivalent of several million dollars today.

The practitioners of fortune-telling, like the clientele, consisted mostly of women. It was an occupation that women could embark upon with few business costs while working from home.

Deserted wives and widows with children to support featured disproportionately in those prosecuted for fortune-telling. So did older women, particularly those with ailments that meant they could no longer undertake more physically taxing work in factories or domestic service.

Newspapers voiced resentment that women – particularly working-class women – should be earning good money at a trade that was technically illegal but openly practised, and even advertised in the papers themselves.

It was ridiculous, one paper stated, that “the fact that she was a washerwoman yesterday will not debar the fool crowd from believing she is a sorceress to-day”.

Another journalist urged women to confine themselves to domestic duties or, if forced to earn their own living, seek more genteel occupations. Dog-walking was considered a step up.

Many women with a love for dogs, but dislike for the necessary care and exercise of them, are glad to turn those duties over to someone else, and it seems as if any one of the humble ways of earning a livelihood were preferable to the palmistry, fortune-telling, mediums and phrenological lines of business.

Of 247 reported prosecutions of fortune-telling in Australia between 1900 and 1918, 82% were against women.

Several of the men prosecuted were charged as accomplices, minding the shopfront of wives or female relatives who were doing a thriving business in fortune-telling. Most of the others came from non Anglo-Saxon backgrounds, the association of divination with “foreign” superstition another factor in the prevailing prejudices against it. 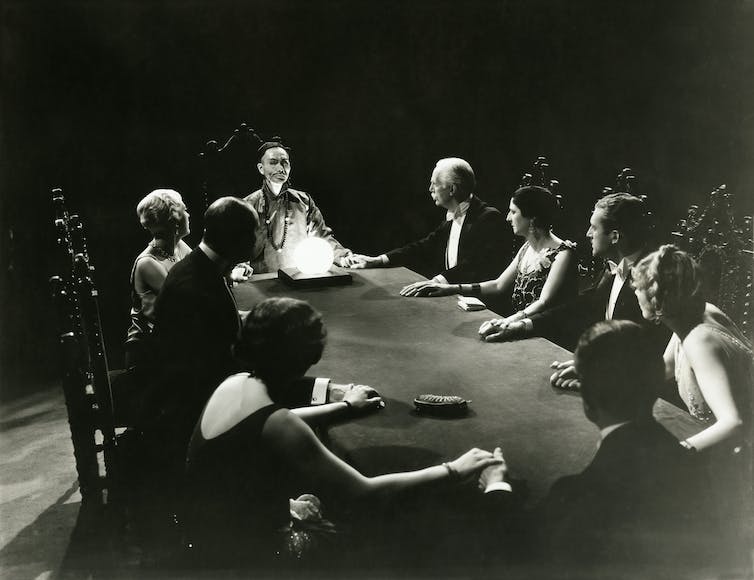 An association with ‘foreigners’ bolstered opposition to fortune-telling. Shutterstock

Despite public criticism of fortune-telling, it was only intermittently policed. This was because it was not enough that an individual was known to be or even advertising themselves as a fortune-teller; prosecution required a witness to money being exchanged for a reading.

Collecting this evidence involved officers going undercover to pose as clients, with police in major cities undertaking such sting operations every few years during the 1900s.

However, as police at the time were all men, fortunetellers were increasingly suspicious of male customers. Some started taking the precaution of only seeing female clients. 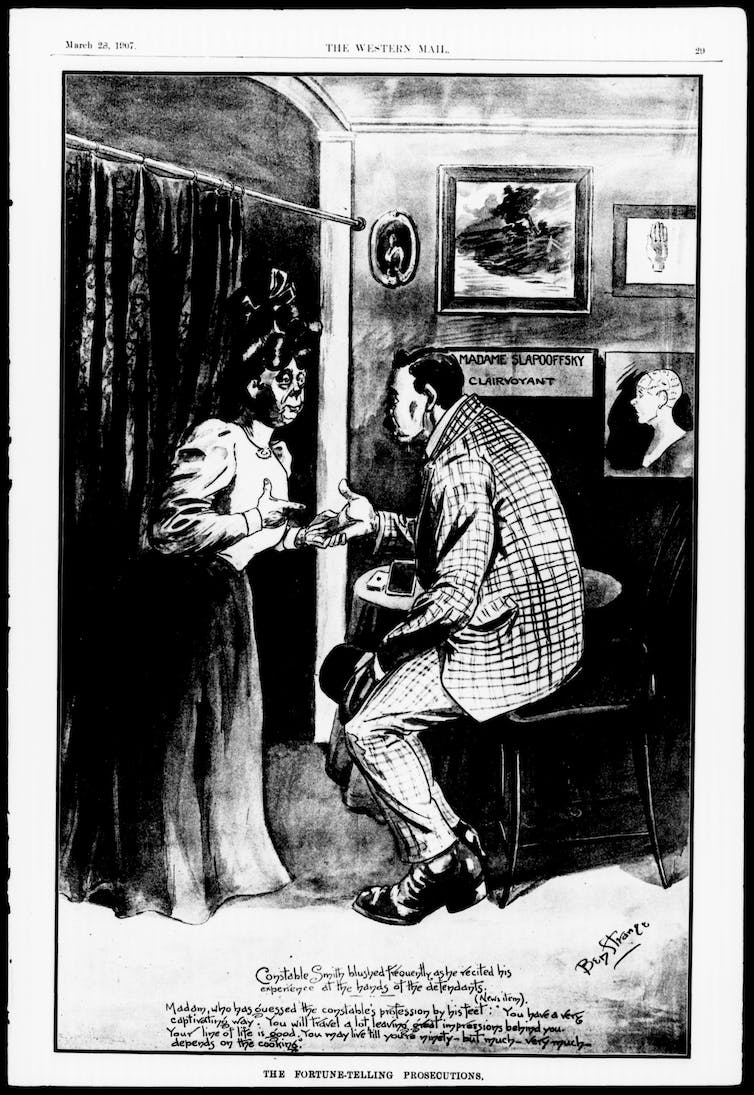 In a cartoon by Ben Strange (1868-1930) an undercover policeman visits a clairvoyant. National Library of Australia

To overcome this, police began hiring women to pose as clients during the periodic fortune-telling raids. When women were later introduced into police forces across Australia during World War One, they were quickly set to prosecuting clairvoyants.

There was increased pressure to crack down on fortune-tellers due to fears that they were preying on soldiers’ loved ones, or that predictions of dire futures might undermine recruiting efforts and national morale.

Ultimately, fortune-telling’s declining popularity by the 1920s was not the result of policing, but the rise of other entertainments. Both fortune-telling and legislation against it continued to exist, sparking occasional prosecutions across the 20th century. It is only in the last 20 years that most states have decriminalised it, having recognised that cases that involve the defrauding of actual victims can be adequately dealt with under existing fraud legislation.

Making a Fortune was made by Impact Studios at the University of Technology, Sydney - a new audio production house combining academic research and audio storytelling. This podcast is available for download through the award winning History Lab podcast. It is the second episode in the four-part series, The Law’s Way of Knowing.