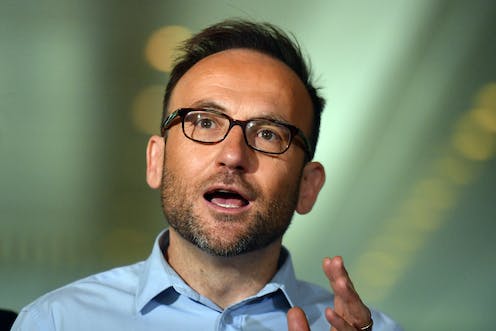 Mad Monday usually describes sports teams “on the tear” at the end of season, not embattled governments embarking on a new parliamentary year.

But Monday, February 3, had that devil-may-care feeling when the two second-tier parties of the Australian parliament, the Nationals on the right and the Greens on the left, dropped depth charges into their respective electoral bases by putting their leaderships up for grabs.

For the junior Coalition partner, this occurred via an unsuccessful raid by Barnaby Joyce on the leadership of Michael McCormack.

That marked a woeful start to the parliamentary year for a Coalition already being hammered through its own policy indolence and the scandalous manipulation of public funds.

Read more: The 'sports rorts' affair shows the need for a proper federal ICAC – with teeth

Things went more smoothly for the Greens, where “mad” Monday brought the unheralded resignation of the party’s well-liked leader, Richard Di Natale. The Victorian senator was swiftly replaced in an uncontested ballot by the party’s sole lower house federal MP, Adam Bandt, the member for Melbourne.

But the interest factor in the power transfer will not necessarily end there. Bandt’s selection raises important questions for the cross-bench party, ideologically, presentationally and functionally. And it may also prove to be a blessing for Labor, which has long bled green on its left flank, particularly in the inner cities.

Like his predecessors Bob Brown and Christine Milne, the outgoing Di Natale confidently predicted the Greens party was on the cusp of a significant expansion as voters opted for the only party not compromised by the fossil fuel industry, particularly coal.

Yet the imminent Green revolution never seems to come, suggesting there may be a natural ceiling on the party’s share of the non-conservative vote, almost all of which flows back to Labor as preferences anyway.

A large measure of the Greens’ electoral optimism derives from the view that, in trying to appeal to both inner-city progressives and blue-collar regional workers, Labor offers weak policies and confusing messages. The each-way bet on the Adani Carmichael coal mine at the 2019 election is most frequently cited.

But it is also possible there is effectively a cap on the Greens party expansion. This is because of its role as a party of progressive conscience rather than one that must appeal to a broad range of voters and offer policies that can be funded if elected.

As one Labor insider noted: “The Greens don’t need to talk to anyone outside the inner cities, and mostly they don’t try to.”

As a moderate type of Greens senator, Di Natale may have already maximised the party’s appeal among people who might otherwise find their natural home within Labor.

How Bandt performs remains to be seen, but he is widely regarded as more aggressive – purer in his orientation to, and reflection of, the party’s base, yet correspondingly “scarier” for mainstream voters.

“He’s a jump to the left, that’s for sure,” said the Labor functionary, who claimed Bandt is less disciplined and measured in his communication style than was Di Natale.

“He forgets who he is talking to – his base is not the same as the electorate and where Di Natale was ‘reassuring’, Bandt can be just plain scary,” the observer said.

When the young WA Greens senator Jordan Steele-John accused the major parties of being virtual arsonists during the bushfire crisis last November, Bandt leapt to his defence amid the furore. Bandt told ABC’s Insiders program:

I think he’s the youngest member of parliament, he’s part of a generation that is terrified and aghast with what they’re seeing with the climate crisis.

If Bandt’s angularity is to be tempered by the responsibilities of leadership, it was not evident in his first press conference, where he railed against climate inaction and inequality. He said:

I refuse to adapt to kids wearing gas masks.

Summer is going from being a time to relax to a time to fear for your life and health. People are angry and anxious because the government clearly doesn’t have the climate emergency under control and has no plan to get it under control. But people are also angry and anxious because the basics of life are no longer guaranteed … even if you do everything they ask, people are no longer guaranteed a good life.

Finally, Bandt’s leadership has a structural peculiarity built in.

Like the short-lived Palmer United Party after the 2013 election, Bandt leads the Greens from the lower house while every one of his other party members is in the Senate.

Read more: Remembrance of rorts past: why the McKenzie scandal might not count for a hill of beans

There were many reasons why that structure was disastrous for Clive Palmer, not least that his party had no clear idea of what it stood for, and Palmer himself was both mercurial and absent.

But having the members – on whose loyalty one’s leadership relies – located together in one chamber and the leader in another seems risky, especially in these times when mad Monday is a 365-day possibility.