Scott Morrison dodged a bullet when the Nationals clung on to Michael McCormack. There was palpable relief when the news came through to the Liberals. “We still have a Coalition,” one MP was heard to say during the Liberal party meeting.

But it had been the Prime Minister who created the circumstances for Barnaby Joyce to get his gun out of the cupboard.

If Morrison hadn’t been in such a politically weak position, due to his summer missteps, he’d probably have brazened out the sports rorts affair.

Morrison didn’t force Bridget McKenzie from cabinet because she skewed the grants scheme - for which she deserved sacking.

Read more: View from The Hill: Bridget McKenzie falls – but for the lesser of her political sins

He acted because the price of keeping her became too high. But then suddenly the cost of ditching her skyrocketed when Joyce seized the moment. Morrison found he had destabilised the deputy prime minister he desperately needs to keep in place.

How things will pan out now is the unanswerable question. Of course no one believes Joyce’s protestation that “I support the vote of the [party] room”. Joyce can’t bear not being the macho top dog and he and his ally Matt Canavan – self-exiled from cabinet and a huge loser from the day – will continue to create trouble for McCormack.

The Nationals don’t release their voting numbers. McCormack people claim he had a healthy margin; the Joyce camp says they were line ball. If McCormack’s backers are right the secrecy harms him, fuelling uncertainty and the opportunity for mischief.

The easy consensus is McCormack must “lift his game”. Might as well tell a jogger to become a sprinter. McCormack isn’t the worst of leaders but he’s never going to be more than average.

And having acquired the reputation of a poor performer, he can’t win. Thus he’s criticised for having a low profile when Morrison was in Hawaii. But could he have raised it when the prime minister’s office was trying to hide their boss’s holiday?

The rebel (for want of a better description) Nats attack McCormack for not standing up to the Liberals, in particular to Morrison. They seek a more distinctive Nationals branding.

Now this is a real issue. A well-functioning National party has to strike a balance within the Coalition between, if you like, growling and purring. Each Nationals leader must find a sweet spot. Assertive but supportive in the government’s inner sanctums. In the electorate, distinctive while also a team player.

But if McCormack follows the wishes of the Nationals to be more aggressive, this carries its potential dangers. On the flip side of that coin is “division”, a bad look for the government as a whole.

McCormack might be a pushover but Morrison has not been sensitive to their mutual interest in the Nationals’ profile. John Howard gave them a few wins, and recognition. Morrison tends to occupy whatever space is available. His very personal central role on drought issues, for example, has overshadowed the Nationals on their home ground.

If Morrison wants to prop up McCormack he needs to pump his tyres. As former Nationals senator John (“Wacka”) Williams told Sky, there was a message in Tuesday’s events for Morrison: “Don’t make the Nationals irrelevant”. The Nationals had to be treated with respect and get some pats on the back, Williams argued.

The Nationals’ schism triggered a reminder that Morrison is in a no win situation internally on climate change policy, as he faces an increasing need to nuance it.

In Tuesday’s Coalition parties meeting (coming immediately after the vote) a bevy of Nationals - Joyce, Canavan, George Christensen and David Gillespie - sent hardline messages on climate among talk of regional jobs and industry. Joyce said some people were trying to push their hobby horse issues out of the fire tragedies. To one Liberal source, these outpourings from the Nationals’ losing side were a bit weird and not very coherent.

They were met by a counter from some moderate Liberals. Earlier, in the separate Liberal party meeting, Queenslander Andrew Laming criticised those who went on policy “solo flights” on climate. The government’s policy was based on the science, which had been overwhelmingly accepted, Laming said – to contest the science undermined the policy.

McCormack’s next test is immediate – recrafting his frontbench. He has two cabinet vacancies, with Victorian Darren Chester expected to fill one.

What happens with the key resources portfolio vacated by Canavan will be crucial, given the coal issue and energy battles. Whether McCormack should have invited Canavan back is a moot point. Canavan (a loud voice for the coal industry) has a sharp policy mind; also, he might have been less trouble for McCormack if still on the frontbench than rampaging round the backbench.

Among the complexities of the reshuffle is that with the fall of McKenzie and Canavan the Nats have no Senate minister, but the remaining three senators (all women) are parliamentary newcomers. Still, one of these women will surely be in line for promotion, at the least to an assistant minister. McCormack sources believe all six women in the 21-member party voted for him; certainly most did.

The significance of the Nationals new deputy, David Littleproud, should not be overlooked in considering the future. Littleproud is competent, ambitious and articulate. He was frustrated at having his portfolio sliced back after the election. 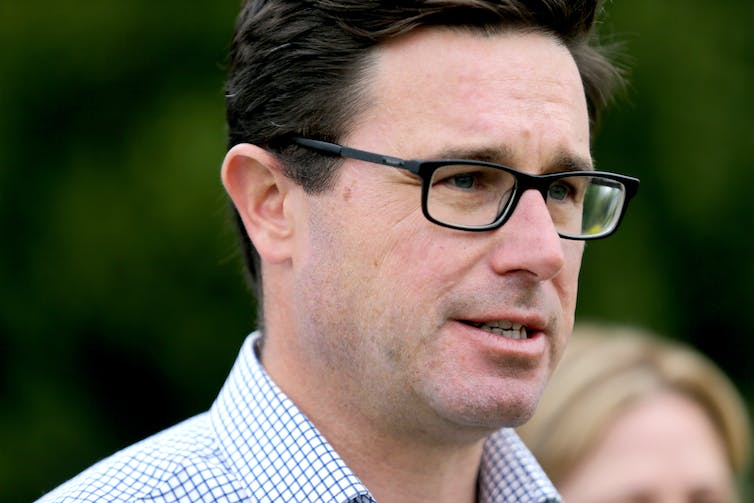 Kelly Barnes/AAP His presence could assist McCormack. At 43, he has plenty of time and, in the National party tradition, an incentive to support his leader and inherit the mantle rather than trying to snatch it. But if McCormack can’t survive until the election, the party would be better off turning to Littleproud than to Joyce, who would carry a maximum risk factor, not least for Morrison.