Debate over what the Reserve Bank governor and the treasurer should do usually runs along familiar lines.

The bank is supposed to set its cash rate to keep inflation low and stable, while the government is supposed to avoid deficits, at least on average, over the economic cycle and preferably run surpluses.

We have heard it so often that it seems like common sense. So when a famous economist comes along and contradicts it - an advisor to a US presidential contender no less – it’s understandable that people are shocked.

Yet that’s the message of Stephanie Kelton, a senior economic adviser to Bernie Sanders, and before that chief economist on the US Senate Budget Committee.

Professor Kelton, a leading modern monetary theorist, is the 2020 Visiting Harcourt Professor at the University of Adelaide, and during her visit in January was interviewed by most Australian newspapers, and many radio and TV outlets.

According to modern monetary theory (MMT), the narrative we have become used to is based on an outdated and misleading description of monetary systems. The key thing that’s been missing is an appreciation of the difference between a currency issuer and a currency user.

Before we can spend money, we need to find it – either by earning it, begging for it, digging into savings, or borrowing it.

Governments create, rather than raise, money

If we borrow money, we need to repay it at some point in the future or risk going broke.

The Australian Commonwealth government, and other national governments that issue currencies in the same way that our government does, are in a completely different position.

They have nothing in common with currency users. They can’t go broke, ever. It isn’t even possible, given the way our system works.

Our government is the monopoly issuer of the Australian dollar. Every dollar that it spends is a new dollar. It doesn’t need to raise taxes or or borrow before it can spend, although that is what it appears to do to those who don’t know how our monetary system works.

In reality, it is the other way around. Governments like ours need to spend dollars into existence before they can be used to pay taxes or to buy newly issued bonds. We need the government’s money - they don’t need ours. They issue the dollar. We use dollars.

Think of the economy as a bath 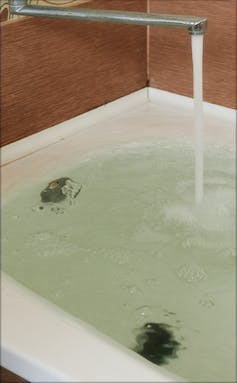 The economy is like a bath. It needs to be pretty full, but not too full. Shutterstock

The macroeconomic role of taxation is to stop the bath overflowing – to stop total spending in the economy going beyond the productive capacity of the economy and creating the risk of accelerating inflation.

Taxation limits the spending power of the private sector, creating room for the government to spend on public goods and services and investments without driving prices up.

A budget deficit is simply the government making a net contribution of dollars to the economy, putting more dollars into the bath (into private bank accounts) than it is taking out in tax. It needs to, when the bath isn’t full enough. Its deficit is our surplus.

It isn’t a problem in an environment of unemployed resources and low and stable inflation where the bath isn’t full. It is a way of supporting the economy, and of adding to business sales and profits.

Read more: Memories. In 1961 Labor promised to boost the deficit to fight unemployment. The promise won

When the government runs a surplus, it puts less into the private sector than it takes out in tax. It vacuums up dollars and destroys them. It runs the risk of either driving economy into recession (as happened under Paul Keating) or driving households into debt (as happened under Peter Costello). Its surplus is our deficit.

There may be times when government surpluses are appropriate, but in a country not running large trade surpluses, those times will be rare indeed and won’t last for long. Australia has never run surpluses for long.

Governments choose to borrow, but needn’t

As for government debt – so often misnamed the national debt – it is better described as dollars that have been spent into existence and not yet taxed away. It might be better to call it the net money supply, than to label it as a debt.

The government chooses to issue bonds to the private sector and foreign investors also choose to buy them. But it needn’t. It could fund itself without borrowing. It issues the currency. It can’t go bust. And when there is spare capacity it won’t cause inflation.

There is of course a great deal more to MMT than I can fit into 800 words. It is based on more than 25 years of detailed research by many economists, including Australia’s Bill Mitchell and Kelton herself. But I hope there’s enough here to show you why it has become the first serious challenger to the narrative we have become so used to in decades.

You can learn more about it by watching Stephanie Kelton’s recent Harcourt Lecture at the University of Adelaide, or by reading her new book, The Deficit Myth, which will be published in June.