Why do different countries have different languages? – Maeôra, aged 6

Humans have long been puzzled by the existence of different languages. A long time ago, people took guesses or made up stories to explain this.

You might know the tale of the Tower of Babel (have a look at a famous painting of it, below). In this story from the Bible, humans originally spoke a single language. But God got angry when these humans tried to build a tower to heaven. This wasn’t in God’s plan. So he made humans speak different languages and scattered them across the Earth. 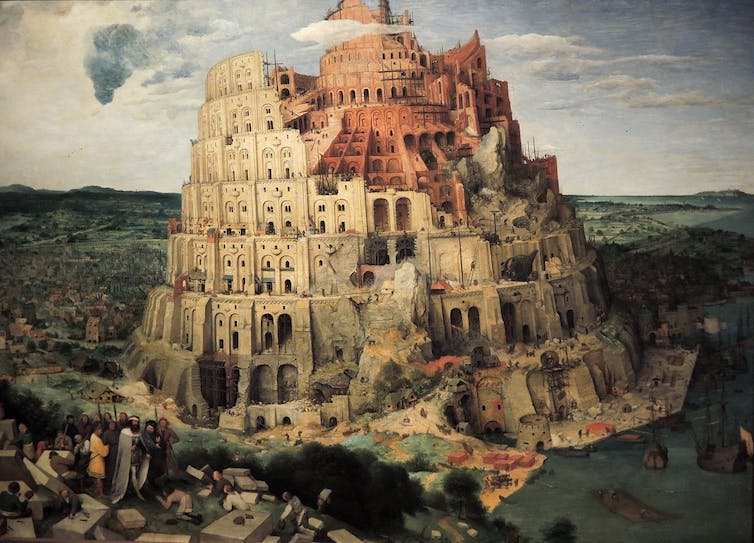 Tower of Babel by Pieter Bruegel the Elder, 1563. Shutterstock

In another story, believed by the Indigenous Absaroka people in the United States, an old coyote created humans. At first, these humans spoke a single language (like in the Babel story), but a younger coyote argued to the old coyote that humans had a talent for warfare. The young coyote convinced the older one to make humans speak different languages. That way, humans could misunderstand one another — this would lead to war and humans could show off their talent!

And in yet another story, in Jawoyn country in the Northern Territory people believe the crocodile Nabilil planted language into the landscape, giving names to land features as he travelled.

There are many, many more stories like these throughout the world!

More recently, we linguists have tried to answer this question. Truthfully, we’ll probably never know the origin of language, but we do have a good idea of how different languages appear and change. And, interestingly, there’s a little bit of truth in those earlier stories of castles, coyotes and crocodiles.

In the Tower of Babel story, God makes humans travel throughout the world. In fact, we know from archaeological digs that humans have been on the move for thousands of years — as long as we’ve been human!

Take the example of Latin. When Latin speakers split up and spread themselves around Europe, their Latin turned into languages like French, Spanish, Italian and Portuguese. So Latin isn’t really dead — it evolved into these modern languages.

Read more: Curious Kids: Why do Aussies have a different accent to Canadians, Americans, British people and New Zealanders?

English was born in the same way. In the fifth century, powerful Germanic tribes (those Angles, Saxons and Jutes) left their European homelands and invaded Britain. The dialects of Germanic they spoke gave rise to Old English — it would sound as foreign to you as modern German does now (for example, urne gedæghwamlican hlaf is Old English for “our daily bread”).

The coyote factor: language and identity

The Absaroka coyote story points to how people with different languages might misunderstand or disagree with one another. Language is often connected to our identity. Along with travelling to different places, identity is another thing that can lead to language change or different languages.

For instance, in one village in Papua New Guinea (a country just north of Australia), everyone spoke the same language, Selepet, as people in nearby villages. However, those living in this village decided to change their word for “no”. This way, their version in Selepet would be different (bunge) from the typical Selepet word for no (bia), and would represent the proud identity of the village.

Read more: Curious Kids: Why does English have so many different spelling rules?

Think closer to home and the rivalry between places like Sydney, Melbourne and Perth, or between the bush and the city. The coyote factor is a major incentive for people everywhere to start highlighting their identity through their language.

So will Australian English eventually break up into separate languages in the way Latin did? Probably not. The thing is, we aren’t isolated as people were in earlier times. We chat regularly, face to face, on the phone, via computers, and in many other ways.

The crocodile factor: new words for new places and experiences

The story of Nabilil the crocodile points to how language evolves in close relationship with its environment, and how those who travel assign new labels to the land, animals and experiences they encounter.

We see this with the arrival of English to Australia. English was more than 800 years old by the time it came to be used in Australia. However, English-speaking settlers did not have words to describe Australia. They borrowed words from Indigenous Australian languages (kangaroo, wombat) or developed new meanings for old words (magpie, possum; both of these were originally used for different animals in Europe and the US!).

Like people, languages are always on the move, and this is why we have so many of them — more than 300 within Australia alone. One way to avoid the curse of little coyote is to learn some of them!