The Australian government has spent the past year promoting its “Pacific step-up” as one of the country’s “highest foreign policy priorities”.

Although there has been some progress on the diplomatic front in the past year – an increase in diplomatic visits, a boost in foreign aid and a new A$2 billion infrastructure financing initiative – there is some way to go to bring balance, mutual respect and a sense of long-term partnership and commitment to our relations with the region.

New research shows people in three of Australia’s closest Pacific neighbours – the Solomon Islands, Fiji and Vanuatu – are concerned Australia does not know how to engage successfully as part of the Pacific community.

Late last year, the Whitlam Institute at Western Sydney University commissioned a policy research project led by the peacebuilding NGO Peacifica and Pacific specialist Tess Newton Cain. It aimed to understand how people in the three island nations view Australians and the government’s policies in the Pacific.

We conducted focus groups and one-on-one interviews with 150 participants from varying backgrounds, including people from urban and rural settings, women, young people, business people and those engaged in civil society and government. These conversations were then followed by expert seminars in Canberra and Suva.

The full report will be released at the Australasian Aid Conference on February 17.

‘Stifled by a degree of parochialism’

The participants in our surveys praised Australia’s efforts to empower women, as well as our humanitarian assistance programs, for their effectiveness and impact. But beyond that, the picture was more bleak in terms of whether we have the right policy and diplomatic priorities.

Across the three countries, there was a similar concern of a lack of balance and equality in the Australia-Pacific relationship and a belief Australia doesn’t truly hear the perspectives of its neighbours.

There was also a perception of a certain level of racism and disrespect directed towards people from the Pacific. As one participant said, the relationship is

layered over and stifled by a degree of parochialism that is not only unnecessary, it’s counter-productive.

Our participants pointed to numerous examples of how Australians lack cultural sensitivity in their dealings with the Pacific, especially compared to people from New Zealand and even China. As one participant noted:

China is listening and looking, observing.

Remove the visa requirement to allow South Sea countries to be able to have access to a region that they helped to develop.

The importance of recognising Pacific sovereignty

Historical memory runs deep and policy approaches to the region need to take into account colonial histories – including Australia’s own role.

For these nations, the late 18th century practice of “blackbirding” - the kidnapping of South Sea islanders as indentured labour for Australian plantations - is still very much part of the historical framing of the relationship with Australia.

Our participants also took very seriously issues of their own sovereignty, independence and the importance of national ownership of their futures. They reflected a desire for developing long-term and sustainable bilateral relations based on mutual respect and common interest.

as a Pacific islander, these are our countries, this is our place. Whatever countries want to do to help us should be something that is beneficial for us but also creating relationships. That is what our culture is all about, creating lasting relationships, not just to fulfil their own agendas and leave us. 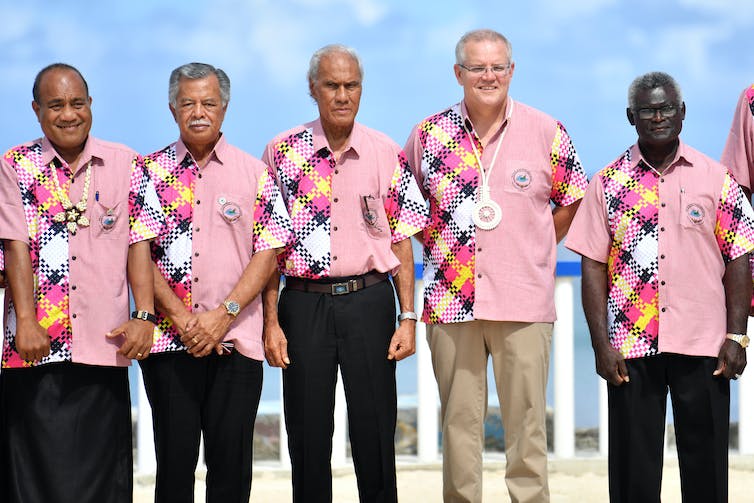 Scott Morrison has stressed the importance of the ‘Pacific family’, but the message isn’t resonating completely in the region. Mick Tsikas/AAP

The role of Indigenous Australians

Interestingly, our research shows Australian domestic politics are important to our relations with the region.

It’s not surprising Australia’s climate policies impact how we are perceived in the region, but our policies toward Indigenous people are also significant.

Our participants felt Aboriginal and Torres Strait Islanders were almost invisible in Australia’s relations with the Pacific and this has limited our understanding of – and potential for engagement with – the region.

Repeatedly, the point was made that Australia lacks a clear sense of identity and connection to place and this is hampering our relationships in the Pacific. As one participant said,

Although we are from the same region, the Pacific Islands and Australia rarely speak with one voice … When you see international meetings, Fiji and other Pacific countries are sitting on one side of the table, while Australia, New Zealand and the US are always sitting over there.

Ways to improve our understanding of the region

While our research shows there is a genuine warmth in the Pacific toward Australia, it also makes clear we could be doing much better.

One perceived flaw of the “Pacific step-up” is that it’s a unilateral Australian initiative for the region, not a shared agenda.

We need to listen more to the national and international aspirations of Pacific islanders. We also need to expand our engagement beyond traditional diplomatic and government links. For many respondents, cultural and faith communities represent international linkages that are at least as important as nation-state relations.

Our report will make a number of recommendations for more effective Australian policy-making. One idea is co-hosting a regional cooperation summit, where a diverse range of regional policy-makers and communities can explore issues that are of utmost importance for Pacific peoples.

And as our research shows, strong Aboriginal and Torres Strait Islander leadership and participation in such a gathering would be essential.