The Australian Rheumatology Association this week warned people not to take the supplement glucosamine for their osteoarthritis due to possible allergic side-effects.

What’s the evidence behind this latest advice? And do you really need to stop taking it?

For years, glucosamine has been marketed as a treatment for osteoarthritis, which can occur when the protective cartilage in the joints wears down over time.

This is despite conflicting evidence on whether the supplement works. Yet many patients may buy glucosamine, presuming that even if it doesn’t help, at least it’s “natural” and so won’t do any harm.

But an Australian study, which has been online since last year and was cited in one of this week’s media reports, has given us more information about glucosamine’s safety.

The study found hundreds of allergic reactions to glucosamine have been reported to Australia’s medicines watchdog, the Therapeutic Goods Administration (TGA).

So is it safe for you to take glucosamine? In short, if it works for you and you haven’t had any side-effects, and your doctor and pharmacist know you are taking it, it is likely to be safe based on the multiple trials conducted to date.

Glucosamine is a naturally occurring substance the body uses to help build joint tissue, such as cartilage and tendons. In a supplement, the glucosamine can be made from the shells of prawns and other crustaceans, or it can be made synthetically in a factory.

Whether it works to manage osteoarthritis seems open to debate. The most recent evidence suggests little to no clinical benefit.

But advice to GPs about how to treat osteoarthritis says the issue isn’t just confined to glucosamine.

When the Royal Australian College of General Practitioners looked at about 62 other medicines and possible treatments for osteoarthritis of the knee and hip (which include registered drugs and complementary medicines), none were backed by high-quality evidence to say they worked. Most of the evidence was based on low- or very low-quality studies.

Is glucosamine really as dangerous as people say?

The Australia study found 336 cases of side-effects to glucosamine (and to another supplement used for osteoarthritis called chondroitin) were reported to the TGA over 11 years. Of these, 263 cases were allergies, which ranged from mild to severe.

We don’t know if these reactions included those from people with a known allergy to seafood or sulfur, as these would increase their risk of a reaction to glucosamine (glucosamine can come in different formulations, including glucosamine sulfate). 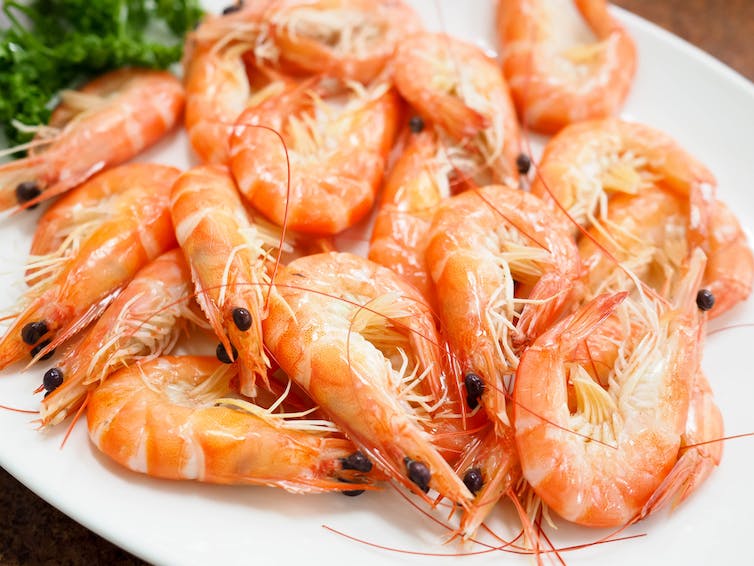 The glucosamine in supplements can come from the shells of prawns and other crustaceans, which is thought to trigger allergic reactions in some people. Shutterstock

But a large percentage of people take glucosamine daily in Australia, with no ill effects. The cases reported to the TGA amount to just 30 people a year, with 16% of allergic reactions considered severe.

Beyond allergic reactions, there are other safety concerns about glucosamine.

For instance, if you are taking glucosamine and a medicine that thins your blood (such as warfarin after a stroke), this can increase your risk of bleeding.

Glucosamine supplements have also been implicated in chronic liver disease and in worsening underlying asthma. Some patients may also experience digestive symptoms such as heartburn.

The risks of other side-effects seem unclear, including whether it raises blood glucose levels in people with or without diabetes.

While the Australian Rheumatology Association has warned people to stop taking glucosamine, other advice is not so clear-cut.

Arthritis Australia reports glucosamine is a relatively safe treatment option for people with osteoarthritis and has relatively few side-effects compared with traditional medicines.

And the guidelines for GPs on how to manage osteoarthritis of the knee and hip makes a “conditional” recommendation not to use it, based on uncertainty over the balance of harms with potential benefit.

So, what should I do?

What should you do if you’re taking glucosamine? If it works for you and you want to keep using it, then do so only on the advice of your doctor. That’s especially the case if you have any underlying medical conditions including diabetes, allergies or asthma.

Next, let your pharmacist know so they can check for any possible interactions with your other medicines, which can increase your risk of side-effects. You are most at risk if you are also taking warfarin, or any other type of blood thinning medicine.

Finally, if you do have unwanted side-effects from glucosamine, stop using it immediately and report it to your doctor.