Venture beneath the ocean and you’ll see schools of fish and other alien-like species that may take your breath away. But one species in particular is an enigma in the marine world: the shy, elusive seahorse.

Approximately 50 species of seahorse are found worldwide, and Australia’s waters are home to at least 17 of them.

However, seahorses are considered threatened around the world, largely from over-harvesting for traditional Chinese medicines, unintended capture in fish trawl nets, and the loss of natural habitats such as seagrasses and mangroves.

To help seahorse populations bounce back while their natural habitats recover, we created new artificial habitats, called “seahorse hotels”. Our recent research showed how these hotels gave the Australian endangered White’s seahorse (Hippocampus whitei) – also known as the Sydney seahorse – a safe place to come together and call home.

Hippocampus, the entire genus (category) for the species, is listed on Appendix II of the Convention on International Trade in Endangered Species (CITES) of Wild Fauna and Flora. This means nations that have signed up to the convention must ensure harvesting seahorses – such as for traditional medicines – is done in a sustainable way. 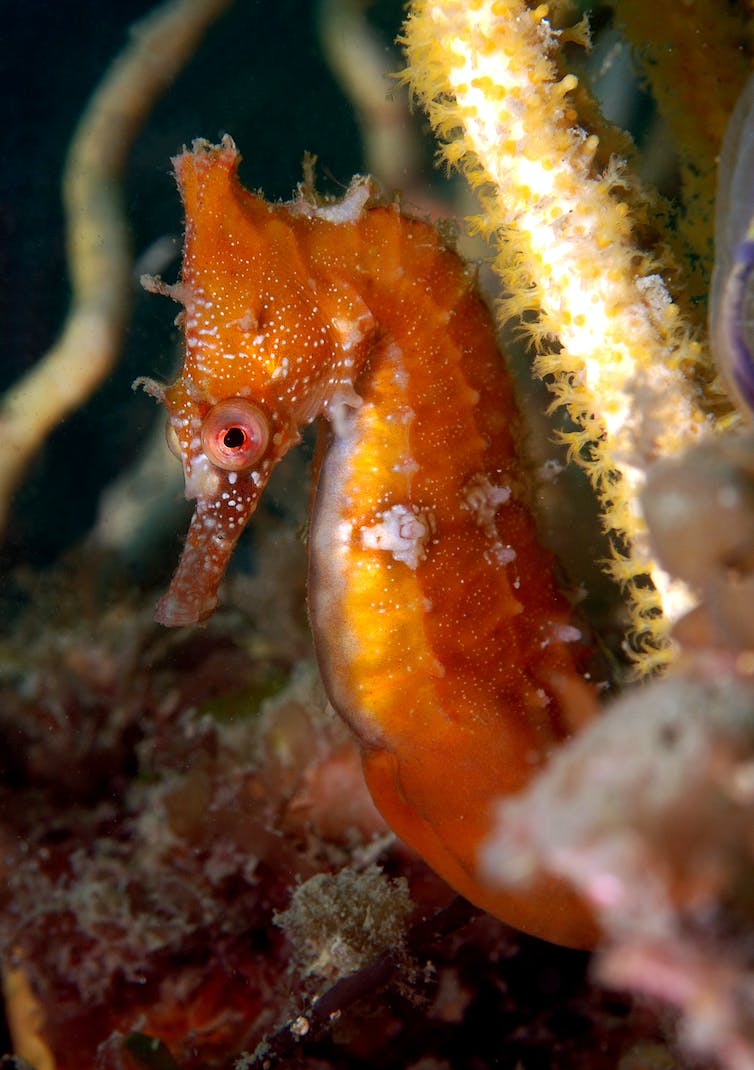 The first Australian seahorse under threat

First discovered in Sydney Harbour, White’s seahorse is native to the east coast of Australia and has been spotted from Hervey Bay in Queensland to the New South Wales south coast.

It grows up to 16 centimetres long and is found in shallow water bays and estuaries, where it lives among its natural habitats of sponges, soft corals and seagrasses. Marine biologists have also shown the species “falls in love” – pairings of males and females mate for life.

Read more: Lionfish: the Mediterranean invasion of an untouchable and enigmatic predator

But over the past decade, White’s seahorse populations declined by up to 97% at some sites in Port Stephens. It’s now considered “endangered” under the NSW Fisheries Management Act. 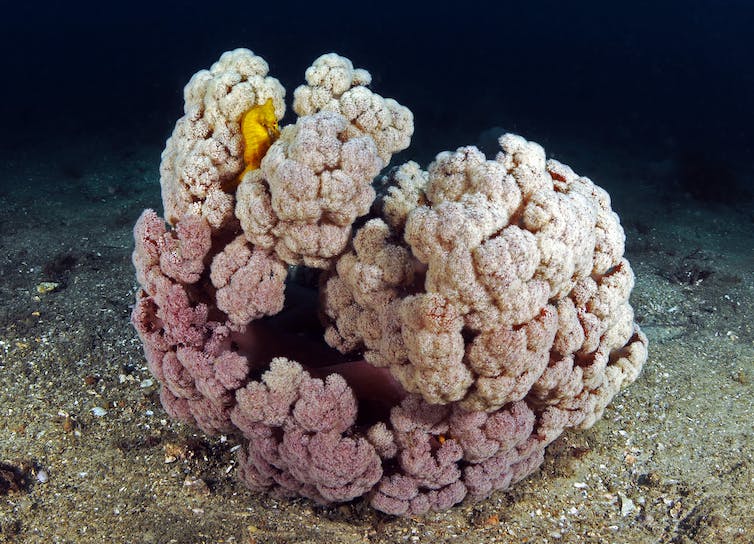 The primary cause is the loss of natural habitats across their range in eastern Australia. In fact, within Port Stephens, more than 90% of soft coral and sponge habitats declined over 10 years at sites where the seahorse was once abundant.

These habitats were destroyed through the installation of boat moorings, anchoring of boats, and the inundation of habitats by sand moving into the Port Stephens estuary.

A home away from home

We devised seahorse hotels to help reverse the decline in White’s seahorse populations. And we named them so because we considered them to be a temporary residence while their natural habitats recovered.

The idea was born after we saw discarded or lost commercial fisher traps that, when rediscovered, had become heavily covered in marine growth such as sponges and corals.

These lost traps over time become magnets for marine growth which naturally starts to occur within days. As the growth increases over time, fish and invertebrates would move onto these new artificial homes. A few seahorses were even spotted living on them. 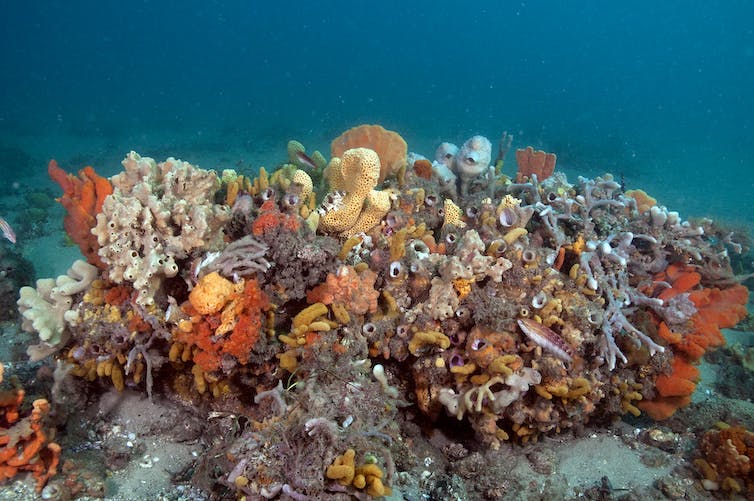 We built on past research, which had also shown White’s seahorse will use artificial habitats if they were available, such as using protective swimming nets found around Sydney.

After we first deployed our 18 hotels, we found it only took within two months for seahorses to start using them. Over time, the numbers of seahorses using the hotels gradually increased: we recorded at least 64 different individuals over the next 12 months of 2018.

Seahorses hold onto the hotels by curling their long tail around the frame, the algae and the sponges, which holds them in place and stops them from being swept away by the waves and currents. By marking each seahorse with small fluorescent tags inserted just beneath the skin (called elastomer), giving each a unique ID, we’re able to track each seahorse. 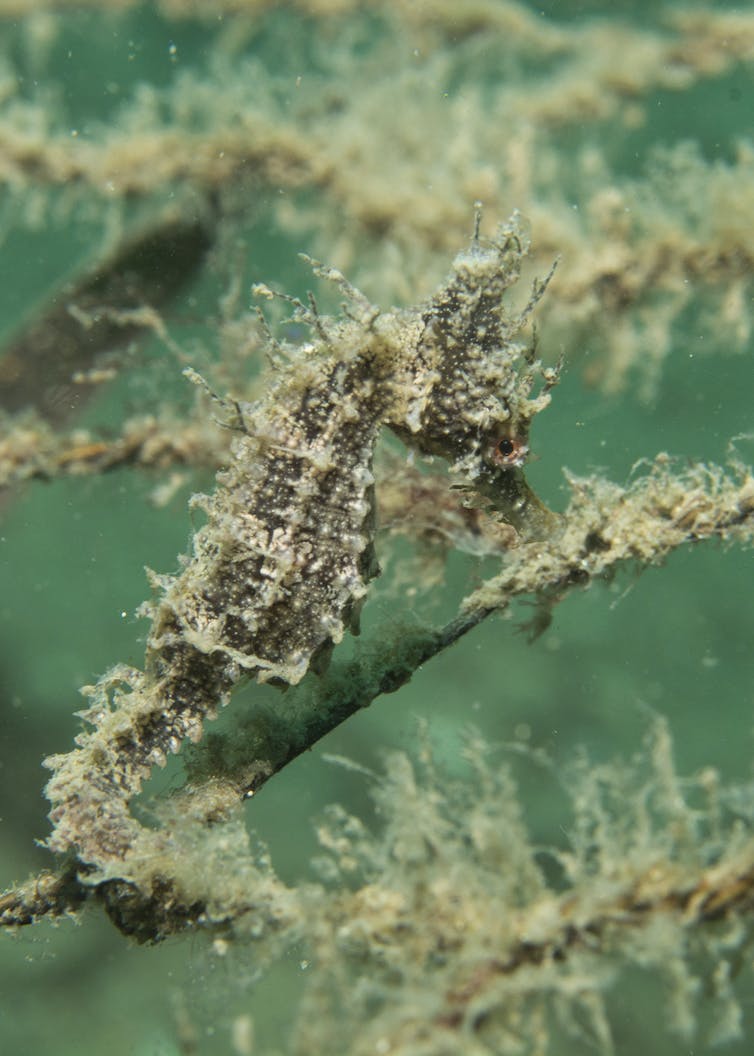 A baby seahorse clinging to the hotel after months of marine growth. Author provided

We found some seahorses maintained a strong attachment to the hotels – they were spotted regularly on the monthly surveys. One seahorse was even sighted using the hotels in 12 different surveys.

Read more: Curious Kids: Is it true that male seahorses give birth?

What’s more, the seahorse hotels help White’s seahorses breed. We saw this when breeding season began in October, finding that 13 males living in the hotels had become pregnant. This gives us hope for the local population size to increase.

Excitingly, our seahorse hotel study has had international interest too, with more hotels trialling in places like Gibraltar, Greece, the United States, Philippines and Indonesia. 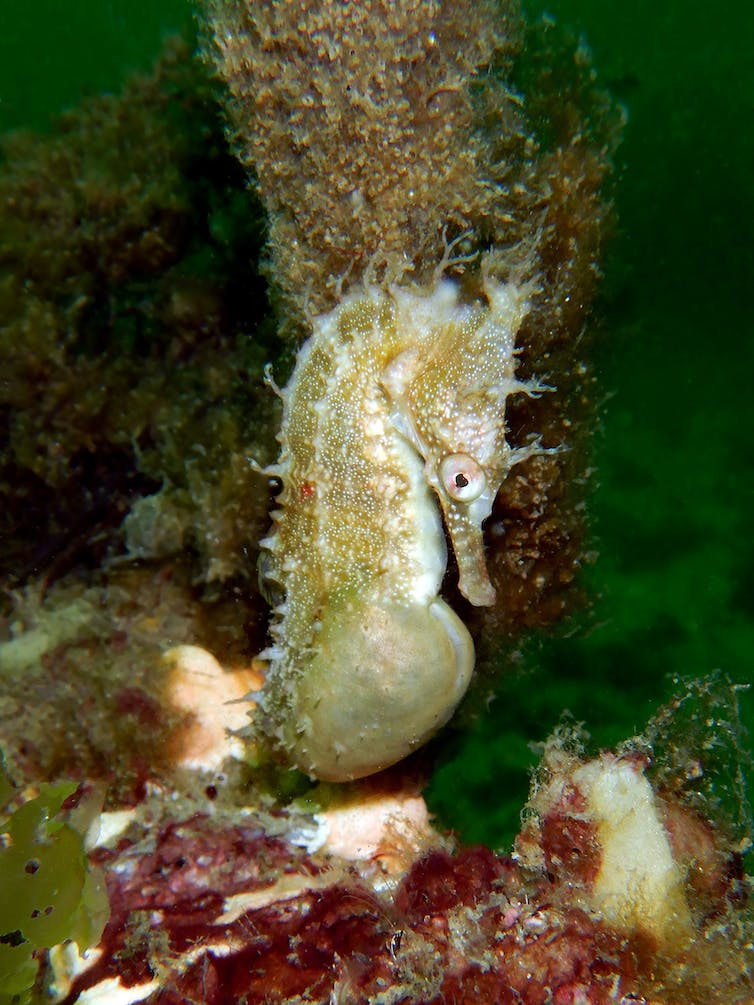 A pregnant male seahorse found living on the seahorse hotels for a few months. Look closely and you can spot the fluorescent orange tag just beneath its skin. Author provided

While we must do what we can to help conserve the natural habitats of seahorses, we at least know we can use the seahorse hotels to recover these elusive populations. Their success in attracting seahorses and helping them come together to mate seems to follow the simple concept of: “If you build it, they will come!”.