Australia’s first people ate a wide variety of fruits, vegetables, nuts and other plant foods, many of which would have taken considerable time and knowledge to prepare, according to our analysis of charred plant remains from a site dating back to 65,000 years ago.

We already know the earliest Aboriginal Australians arrived at least 65,000 years ago, after voyaging across Island Southeast Asia into the prehistoric supercontinent of Sahul, covering modern mainland Australia, Tasmania and New Guinea.

But while the timing of this journey is becoming relatively clear, we know comparatively little about the people who made it, including their culture, technology, diet, and how they managed to thrive in these new landscapes.

Our research, published today in Nature Communications, describes charred plant remains found at the archaeological site of Madjedbebe, a sandstone rock shelter on Mirarr country in western Arnhem Land. It provides the earliest evidence for plant foods consumed by humans outside of Africa and the Middle East and tells an important story about the diet of the earliest known Aboriginal people in Australia. 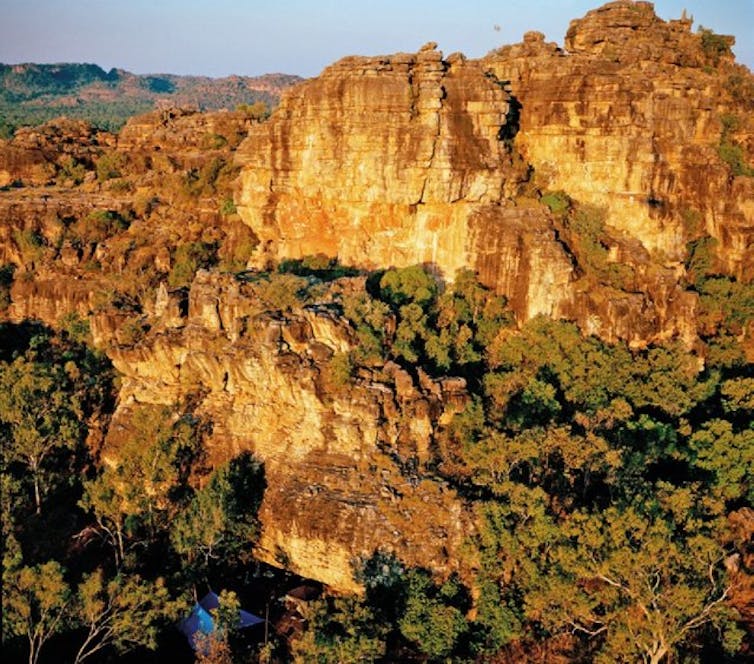 What is the evidence?

While animal bones do not survive in the earliest levels of Madjedbebe, remarkably, plant remains do survive as a result of charring in ancient cooking hearths.

We recovered these remains using a simple yet effective method. By immersing the samples in water, the light charcoal pieces float and separate easily from the heavier sandy sediment in which they are buried.

Among the charred plant remains are fruit pips, nutshells, peelings and fibrous parts from tubers, and fragments of palm stem. These are the discarded leftovers of meals cooked and shared at the rockshelter tens of thousands of years ago. 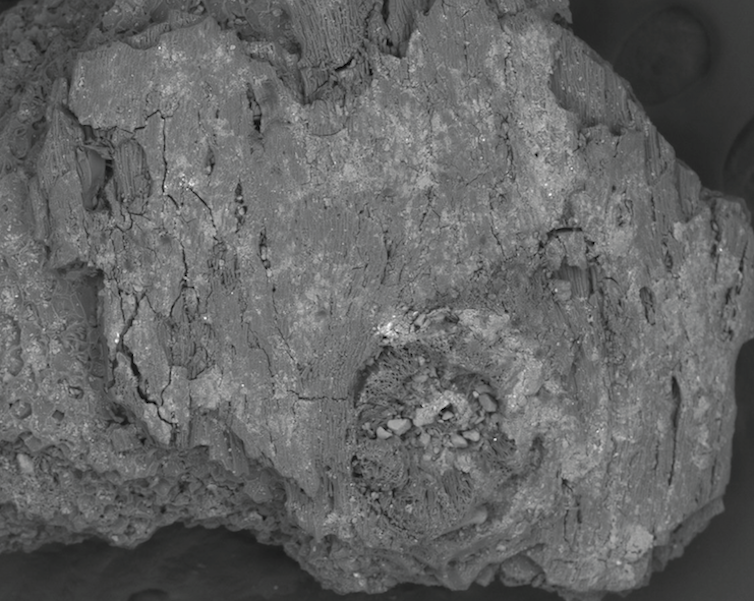 Today, the Madjedbebe rockshelter and the environments around it are just as culturally and economically significant to the Mirarr people as they were in the deep past. Our research is the result of a partnership with the Mirarr, bringing together Indigenous and scientific knowledge.

With the help of traditional owners and research colleagues, May Nango and Djaykuk Djandjomerr, we identified the modern-day plants that would have been eaten at Madjedbebe, and the cooking techniques needed to make them edible. Some foods, such as fruits, required minimal processing. But others, such as the man-kindjek or cheeky yam, needed to be cooked, leached and/or pounded before being eaten. Some of these preparation techniques can take up to several days.

We studied the charred plant remains under the microscope, identifying them by matching their features with the modern-day plant specimens. Using this technique we identified several fruits and nuts, including “plums” (Buchanania sp., Persoonia falcata, Terminalia sp.), and canarium (Canarium australianum) and pandanus nuts (Pandanus spiralis); three types of roots and tubers, including an aquatic-growing species; and two types of palm stem. 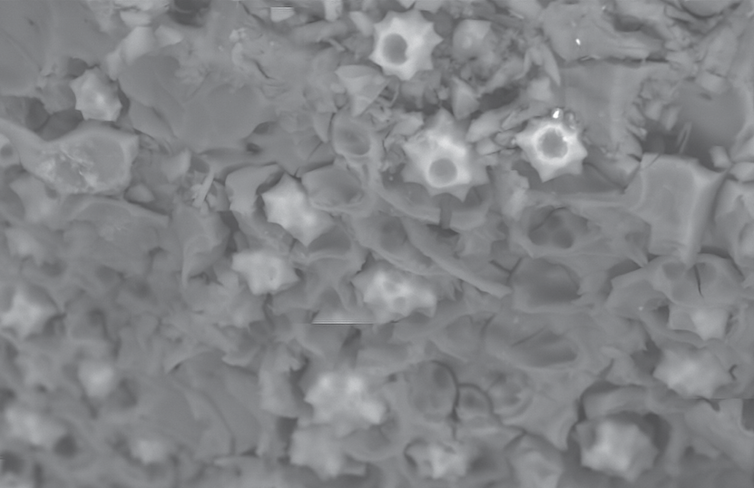 What does this tell us about early Aboriginal lifestyles?

Several of these plant foods would have required processing. This included the peeling and cooking of roots, tubers and palm stems; the pounding of palm pith to separate its edible starch from less-digestible fibres; and the laborious extraction of pandanus kernels from their hard drupes. We could only accomplish the latter feat with the help of an electric power saw, although they were traditionally opened by pounding with a mortar and pestle. 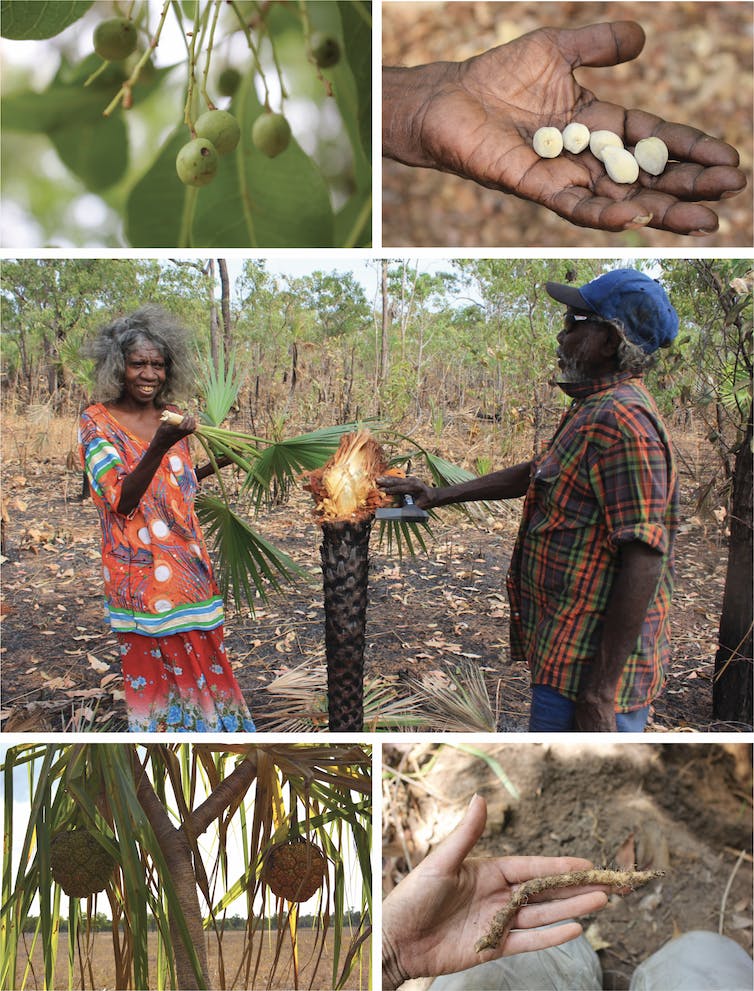 There is also evidence for the further processing of plants, including seed-grinding, left as microscopic traces on the grinding stones found in the same archaeological layer at the site. This represents the first evidence of seed-grinding outside Africa.

Along with other technology found at the site, such as the oldest known edge-ground axes in the world, it demonstrates the technological innovation of the first Australians. They were investing knowledge and labour into the acquisition of plant starches, fats and proteins, as well as into the production of the technologies required to procure and process them (axes and grinding stones).

These findings predate any other evidence for human diet in this region, including Island Southeast Asia and New Guinea.

It calls into question the theory that humans migrating through Southeast Asia fed themselves with as little effort as possible, moving quickly along coastal pathways eating shellfish and other easy-to-catch foods.

Contrary to this, the plant remains found at Madjedbebe suggest that the first Aboriginal people were skilled foragers, using a range of techniques to eat a diverse range of plant foods, some of which were time-consuming and labour-intensive to eat.

Their ability to adapt to this new Australian setting had little to do with a “least effort” way of life, and everything to do with behavioural flexibility and innovation, drawing on the skills and knowledge that allowed successful migration across Island Southeast Asia and into Sahul.

This required the first Australians to pass their knowledge of plants and cooking techniques down through the generations and apply them to new Australian plant species. Along with the innovation of new technology, this allowed them to get the most out of the Australian environment.