People living in cities far from the unprecedented bushfires this summer may feel they can do little more to help beyond donating to organisations that support affected wildlife. But this is not necessarily the case: ten of the 113 top-priority threatened animal species most affected by the fires have populations in and around Australian cities and towns. Conserving these populations is now even more critical for the survival of these species.

Here we provide various practical tips on things people can do in their own backyards and neighbourhoods to help some of the species hit hard by the fires.

Read more: The 39 endangered species in Melbourne, Sydney, Adelaide and other Australian cities

Wildlife may arrive in your neighbourhood in search of resources lost to fire or drought in their ranges. Cities can become ecological traps, as they draw animals towards sub-optimal habitats or even death from threats such as cats and cars. But by providing the right resources, removing threats and connecting your backyard to surrounding habitat, you can turn your property into a refuge, not a trap.

The fires killed an estimated 1 billion animals and Australia’s threatened species list is likely to expand dramatically. As is often the case, the impacts on invertebrates have been largely ignored so far.

Thinking outside the animal box

Despite the focus on animals, it is plants, making up 1,336 of the 1,790 species listed as threatened, that have been hit hardest. Early estimates are that the fires had severe impacts on 272 threatened plant species. Of these, 100 are thought to have had more than half of their remaining range burnt.

The impacts on individual plant species is profoundly saddening, but the impacts on whole ecosystems can be even more catastrophic. Repeated fires in quick succession in fire-sensitive ecosystems, such as alpine-ash forests, can lead to loss of the keystone tree species. These trees are unable to mature and set seed in less than 20 years.

Losing the dominant trees leads to radical changes that drive many other species to extinction in an extinction cascade. Other badly impacted ecosystems include relics of ancient rainforests, which might not survive the deadly combination of drought and fire.

It is difficult to know how best to “rescue” threatened plants, particularly when we know little about them. Seed banks and propagation of plants in home gardens can be a last resort for some species.

You can help by growing plants that are indigenous to your local area. Look for an indigenous nursery near you that can provide advice on their care. Advocate for mainstream nurseries, your council and schools to make indigenous plants available to buy and be grown in public areas. 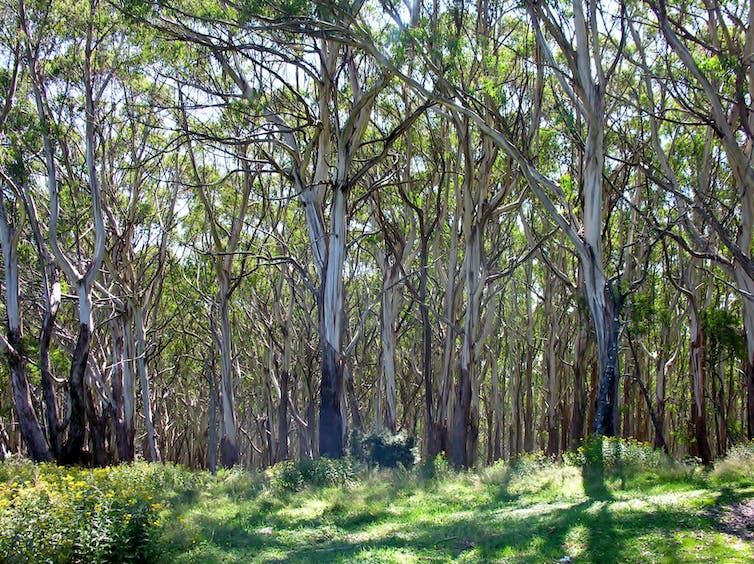 Plants also provide shelter and nest sites, so think twice about removing vegetation, leaf litter and dead wood. Fire risk can be managed by selecting species that are fire-suppressing.

Urban gardens also provide water for many thirsty creatures. If you put out a container of water, place rocks and branches inside so small critters can escape if they fall in.

Read more: You can leave water out for wildlife without attracting mosquitoes, if you take a few precautions

Backyard ponds can provide useful habitat for some frog species, particularly if you live near a stream or wetland. Please don’t add goldfish!

The best frog ponds have plants at the edges and emerging from the water, providing calling sites for males and shelter for all. Insecticides and herbicides harm frogs as well as insects and plants, so it’s best not to use these in your garden.

Piles of rocks in the garden form important shelters for lizards and small mammals.

It’s important to consider threats too. Cats kill native wildlife in huge numbers. Keep your pet inside or in a purpose-built “catio”.

When driving, think about killing your speed rather than wildlife – especially while populations are moving out of fire-affected areas in search of food. Slowing down can greatly reduce animal strikes. 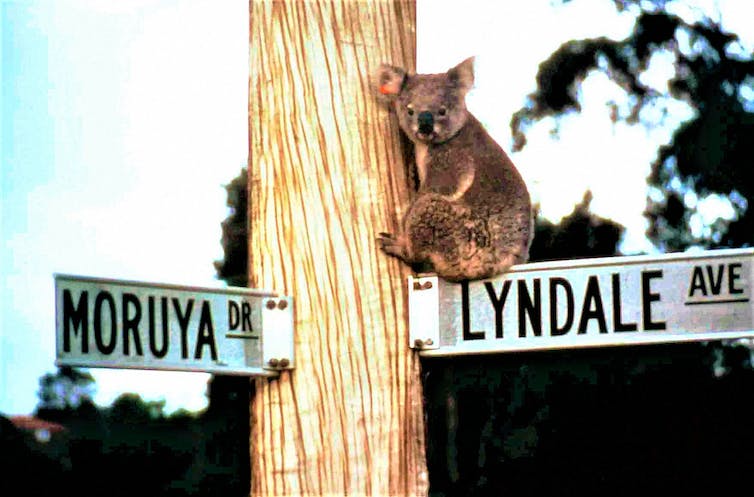 Many animals are moving out of burnt-out areas in search of food, water and shelter. S. Phillips/Australian Koala Foundation/AAP

With the loss of huge areas of forest, species like grey-headed flying foxes will need to supplement their diet with fruit from our backyards. Unfortunately, they risk being entangled in tree netting. If you have fruit trees, consider sharing with wildlife by removing nets, or using fine mesh bags to cover only select bunches or branches.

Read more: Not in my backyard? How to live alongside flying-foxes in urban Australia

Living with the new visitors

People have different levels of knowledge about our native wildlife, and some will be more affected by new wildlife visitors than others. Some of these critters are small and quiet. Others are more conspicuous and may even be considered a nuisance.

Try to discuss what you are seeing and experiencing with your neighbours. When you can, provide information that might ease their concerns, but also be sympathetic if noisy or smelly residents move in. It is important to tolerate and co-exist with wildlife, by acknowledging they might not conform to neighbourly conventions.

Given the unprecedented extent and intensity of these fires, it is difficult for scientists to predict how wildlife will respond and what might show up where. This is especially the case for species, like the regent honeyeater, that migrate in response to changing resources. New data will be invaluable in helping us understand and plan for future events like these.

If you do see an animal that seems unusual, you can report it through citizen-science schemes such as iNaturalist. If an animal is injured or in distress it’s best to contact a wildlife rescue organisation such as Wildlife Victoria or WIRES (NSW).

Our wildlife is under pressure now, but we can help many populations by ensuring safer cities for the species that share them with us.

How to help birds after the fires

Other threatened species in cities