At a time Australia is meant to be reducing its greenhouse emissions, the upward trend in transport sector emissions continues. The latest National Greenhouse Gas Inventory report released last week shows the transport sector emitted 102 million tonnes (Mt) of carbon dioxide equivalent (MtCO₂-e) in the 12 months to September 2019. This was 18.9% of Australia’s emissions.

Overall, the trend in emissions from all sectors have been essentially flat since 2013. If Australia is to reduce emissions, all sectors including transport must pull their weight. 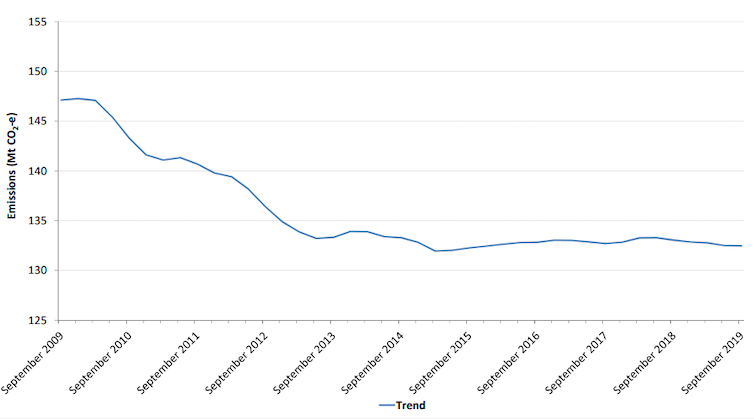 Transport emissions have gone up 64% since 1990. That’s the largest percentage increase of any sector. 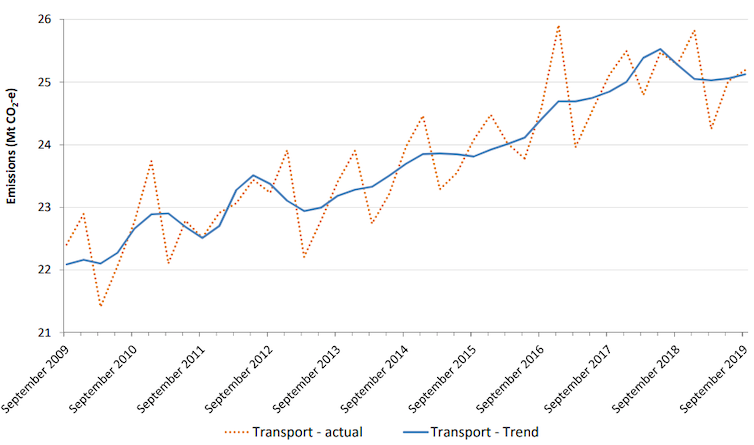 Transport sector emissions include the direct burning of fuels for road, rail, domestic aviation and domestic shipping, but exclude electricity for electric trains.

Transport emissions are now equal second with stationary energy (fuels consumed in the manufacturing, construction and commercial sectors and heating) at 18.9%. The electricity sector produces 33.6% of all emissions. The main reasons for transport emissions trending upwards are an over-dependence on cars with high average fuel use and an over-reliance on energy-intensive road freight.

Increasing transport emissions are a result of long-standing government policies on both sides of politics. In 2018, the Climate Council noted:

Australia’s cars are more polluting; our relative investment in and use of public and active transport options is lower than comparable countries; and we lack credible targets, policies, or plans to reduce greenhouse gas pollution from transport.

John Quiggin and Robin Smit recently wrote about vehicle fuel efficiency for The Conversation. They cited new research that indicates emissions from road transport will accelerate. This is largely due to increased sales of heavier vehicles, such as four-wheel drives, and diesel cars.

The government has ignored recommendations to adopt mandatory fuel-efficiency standards for road passenger vehicles. Australia is the only OECD country without such standards.

Research by Hugh Saddler found a marked increase in CO₂ emissions from burning diesel (up 21.7Mt between 2011 and 2018). A 2015 Turnbull government initiative to phase in from 2020 to 2025 a standard of 105g of CO₂ per kilometre for light vehicles was “shelved after internal opposition and criticism from the automotive lobby”.

At the same time, the uptake of electric vehicles is slow. Economist Ross Garnaut, in his 2019 book Superpower: Australia’s Low-Carbon Opportunity, sums it up:

Australia is late in preparation for and investment in electric road transport.

Australia’s low transport energy efficiency (and so high CO₂ emissions) has also attracted overseas attention. The American Council for an Energy-Efficient Economy rates the world’s 25 largest energy users for sectors including transportation. In 2018, Australia slipped two places to 18th overall. It was 20th for transportation with just 6.5 points out of a possible 25 on nine criteria.

For vehicle travel per capita, the score was half a point. For three metrics – freight task per GDP, use of public transport, and investment in rail transit versus roads – Australia scored just one point each.

Only in one metric, energy intensity of freight transport, did Australia get full marks. This was a result of the very high energy efficiency of the iron ore railways in Western Australia’s Pilbara region.

The International Monetary Fund (IMF) has also questioned the Australian government’s preference for funding roads rather than more energy-efficient rail transport. The IMF says Australia should be spending more on infrastructure, but this should be on rail, airports and seaports, rather than roads.

What can be done

The first thing is to acknowledge that our preferred passenger transport modes of cars and planes cause more emissions than trains, buses, cycling and walking. For example, CO₂ emissions per passenger km can be 171 grams for a passenger car as against 41g for domestic rail.

Data source: Greenhouse gas reporting: conversion factors 2019 For freight, our high dependence on trucks rather than rail or sea freight increases emissions by a factor of three. Read more: Labor's plan for transport emissions is long on ambition but short on details A 1996 report, Transport and Greenhouse, from what is now the federal Bureau of Infrastructure, Transport and Regional Economics (BITRE), reviewed no fewer than 16 measures (including five “no regrets” measures) to cut transport emissions. In a 2002 report, Greenhouse Policy Options for Transport, BITRE offered 11 measures to reduce vehicle kilometres travelled (VKT), nine measures to reduce emissions per VKT, and four road-pricing measures (mass-distance charges for heavy trucks, tolls, internalising transport externalities and emission charging). BITRE last appeared to revisit this important issue in a 2009 report on transport emission projections to 2020. This report projected a total of 103.87Mt CO₂-e for 2019. Actual 2019 transport emissions will be about 102Mt. It’s important to note that BITRE’s 2009 projection was on a business-as-usual basis. The current level of about 4 tonnes a year per person is where Australia was in 2000. Clearly, Australia needs to do better. As well as the BITRE remedies, another remedy would be to adopt a 2002 National Action Plan approved by the Australian Transport Council in collaboration with the Commonwealth, state and territory governments. The plan included, within ten years, “programs that encourage people to take fewer trips by car” and a shift “from predominantly fixed to predominantly variable costs” to “ensure that transport users experience more of the true cost of their travel choices”. This did not proceed. However, New Zealand has effectively adopted this approach for many years. Petrol excise is now 66.524 cents per litre (just 42.3c/l in Australia) and the revenue goes to the National Land Transport Fund for roads and alternatives to roads, resulting also in lower registration fees for cars. New Zealand has had mass distance pricing for heavy trucks for 40 years. These measures have not stopped its economy performing well. Why do measures that would reduce transport emissions continue to be so elusive in Australia?