The Satyricon by Petronius is an unusual surviving text from the ancient world. It is not a work of history, nor a work of soaring epic poetry like Homer’s Iliad or Virgil’s Aeneid, and for various reasons it is hard to get a handle on.

Its contents are pretty grubby because it is about lowlifes and lowlife behaviour. It depicts petty theft, casual violence, opportunistic sex, prostitution, vulgar gluttony, crass displays of wealth by the most ridiculous social climber and gross disrespect for a range of gods, goddesses and hallowed religious rituals, like funerals and proper treatment of the dead. All the good sleazy stuff for when you’re in the mood for that sort of thing.

Rather than a work about heroes or kings or queens or uplifting examples of how to live a virtuous life, the Satyricon is almost a how-to manual for the opposite.

It is the earliest surviving novel in Latin literature, but it is not even close to being intact. We appear to have bits of three books out of an original 16 or possibly more. So we run into problems trying to understand what the plot of the whole work might have been and whether the bits that survive are representative of it.

As far as we can tell, it’s a tale about the misadventures and love triangle of three young men – the narrator Encolpius, Ascyltus and the younger Gitōn.

They all behave disreputably, all know hunger and poverty, all hurt people, and all get hurt in return.

Encolpius arguably suffers the most when he upsets Priapus, a god of fertility, who renders him impotent. Priapus is normally represented in Roman art sporting an enormous, erect phallus – even weighing it in one famous example. He is a minor deity in comparison to Jupiter or Hercules, but he has one outstanding trait, which means a great deal to the “heroes” of this novel. 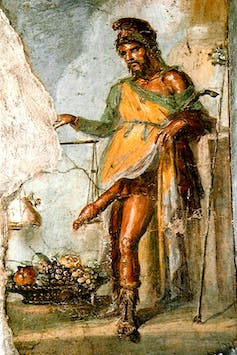 When Priapus deprives Encolpius of his virility, he strikes at the core of Encolpius’s identity, causing him much distress and forcing him in panic to seek a succession of absurd remedies.

The main characters are not good boys. They are jealous, perpetually randy, violent, unfaithful and capricious. They separate and come back together. They lack depth. And they meet a series of characters who complement their deficiencies with flaws of their own.

They look for food, shelter, sex and sexual restoration. Charlatans abound. Everyone is selfish and untrustworthy. Religion is flouted and abused, even though it plainly has power.

The attitude to religion seems to be “whatever works”, but no one is exactly sure what works, so they indulge themselves in equal amounts of devotion and derision – with predictable results.

Our youths seem to be travelling between locations around the Bay of Naples – a notorious region of excess and extravagance, heavily influenced by Greek culture and less constrained by traditional Roman discipline than other parts of Italy.

There is little certainty about this, as with so many features of the tale, but the easy movement between city dives and country villas makes sense in this region.

The banquet of Trimalchio

The most outrageous character they run across is the nouveau-riche pretender Trimalchio, whom they meet through an acquaintance, Eumolpus, who is said to be a poet but is more like a sleaze with intellectual pretensions.

Together they end up at a sumptuous feast at Trimalchio’s villa – the famous Cena Trimalchionis or “Banquet of Trimalchio”.

The feast is a riot of nonsense. Trimalchio, an ex-slave who has bought his freedom, tries to prove he is a man of culture as well as wealth like his free-born counterparts in neighbouring villas and regions. In doing so, of course, he proves only that he completely lacks class or sophistication of any kind and emerges as a self-loving ignoramus. 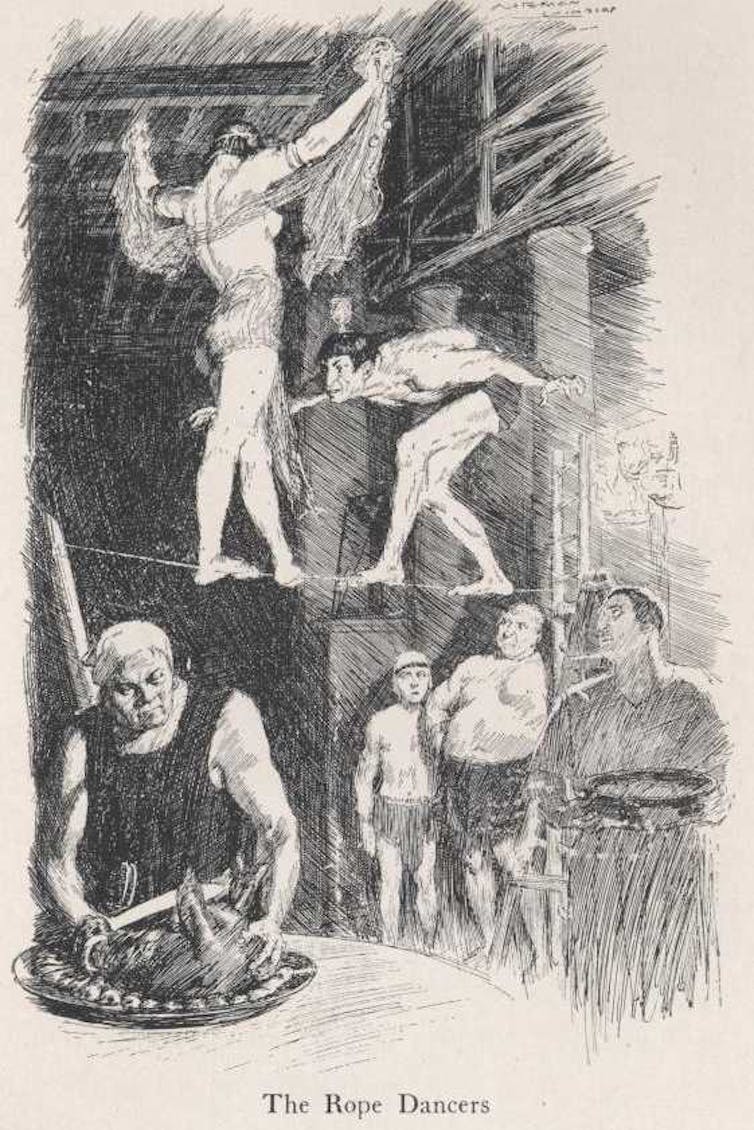 The feast is ‘a riot of nonsense’, illustrated here by Norman Lindsay. Project Gutenberg

There is way too much food, especially the meats and sweets. The dishes are too exotic and difficult, especially the tiny birds. They are served in ostentatiously absurd ways by a bizarre collection of slaves and other functionaries. The guests grab greedily and unappreciatively, upsetting plates, cups and each other. The talk is gross and unedifying.

Trimalchio ends up inviting his cronies to a rehearsal of his funeral, which he has planned meticulously on the model of a noble’s or emperor’s funeral. He fails to see how far he falls short. Clothes, and other props, do not make the man.

But there is more to the feast than meets the eye. The vulgarity of the subject matter is especially memorable because it is conveyed by a master satirist or comic genius.

Trimalchio is described with great attention to detail and inventiveness, and with a certain sympathy rather than vindictiveness. Trimalchio and his hangers-on are acquainted with high literature, though they mangle it terribly, sometimes speaking in vulgar Latin and in language rendered comic by its malapropisms and other features. The writer is a virtuoso for pulling off these effects so cleverly.

The key to interpretation is that the text is a satire, as its name implies. It is inspired by the deeds of satyrs: lecherous, half-human creatures of myth, obsessed with sex. They were symbols of the outrageous, the destabilising and the violent.

The youths of our tale are plainly modelled on them. And the text is comic in approach, designed for a festival atmosphere, when it’s okay to release the irrational, the absurd and the bottled-up frustrations that go along with daily commitment to civilised straightness.

The comic silliness of it all is important to consider when pondering the author and purpose of the work. The author, according to the name that has survived with the text, was Titus Petronius Arbiter.

He is generally identified with the prominent courtier of Nero, the senator Gaius Petronius, who was forced to commit suicide in AD 66 for his part in a conspiracy against the emperor. In a famous passage (Annals 16.17-20), Tacitus says Nero looked to this man as his “arbiter of elegance”, as though his judgment of culture and pleasure was admired.

This identification between the author of the Satyricon and the Petronius of Tacitus might be right. Roman nobles were highly educated in literature and philosophy. Intellectual attainment was one of the myriad ways they competed with one another for social pre-eminence. Such a man might well have been capable of the literary virtuosity and wit that is on display in the text as we have it. 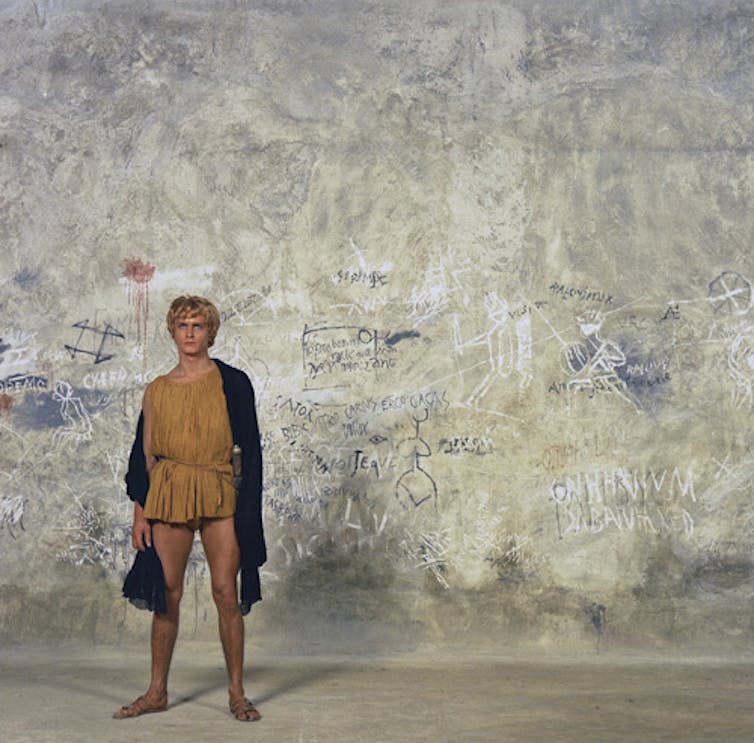 What is slightly worrying about this identification, however, is that Tacitus gives an appreciative portrayal of a man who sends up and resists a tyrant. Nero was certainly this, as the paranoia and murders of his reign indicate. Yet he was also a great sponsor of culture, especially literature and drama.

It’s much more fun if he wasn’t any of these things in this work, but was instead a man who was excellent at satire in a spirit that was fundamentally light and frivolous.