Avian experts have repeatedly demonstrated the remarkable brainpower of birds. Parrots, in particular, have established a reputation as skillful imitators – a talent that requires a complex network of neural connections.

Now, researchers Alex Taylor and Amalia Bastos from the University of Auckland have once again observed parrots beating the odds when it comes to intelligence.

Working with kea (Nestor notabilis) at Christchurch’s Willowbank Wildlife Reserve, their research has revealed this species’ ability to understand probability. Apart from humans and great apes, kea are the only animals to demonstrate this.

The study, published today in Nature Communications, details how these fascinating feathered creatures calculate the chance of something happening.

The study involved presenting a few different kea with two jars, each containing different-coloured tokens: orange and black. The birds were first made to understand that black tokens could be exchanged for food.

Read more: Are pigeons as smart as primates? You can count on it

Then, one person discretely removed one token from each jar and presented the closed hands to the kea. More often than not, the birds would successfully identify which hand was most likely to have a black token, based on the proportions of black and orange tokens in the corresponding jar.

The researchers then increased the difficultly of the task, by changing the colour proportions in the two jars, and even dividing the jars into more than one section per jar. Even then, the kea correctly predicted which hand was most likely to contain the token that would get them a tasty treat. 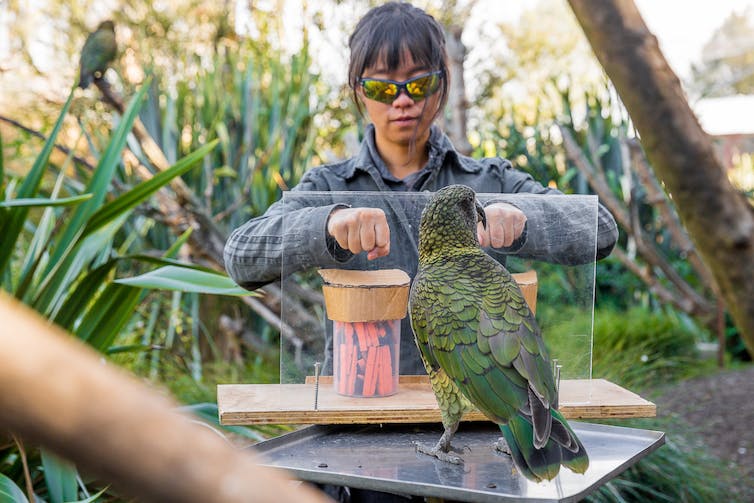 Six kea were included in the sample for the study. Amalia Bastos, Author provided (No reuse)

Figuring out friend from foe

In one test, the birds were faced with two people – one taking a token seemingly at random from a jar with lots of black tokens, and another person who “actively searched” for a black token in a jar containing only a few.

Remarkably, the kea knew not to trust both people equally, and would choose the hand of the person who actively looked for a black token.

While their study only involved a small group of birds, Taylor and Bastos have clearly demonstrated the kea’s capacity to weave several sources of information together, and make decisions about the probability of an event happening.

The kea were able to combine this information into a single prediction about where a rewarding token was most likely to be.

The effort it takes to think

When faced with a decision, all animals may think of the problem in terms of: “is it worth my effort to do this?”

For example, animals in the wild must evaluate if it’s worth risking being attacked by a predator in order to find food.

While such reasoning during uncertainty may actually be more common than we think, it’s difficult for experts to effectively test this. Thus, the analytical approach used in this study effectively sets it apart.

Things were not made easy for the kea. They had to solve problems that combined reasoning.

The parrots even managed this in scenarios where the result of their reasoning was not affected by probability alone (like a human thinking “is it worth my effort to go surfing today when only one wave appears to be a good one?”), but also by physical barriers (“then there’s that pier I’ll have to contend with”) and social cues (“but the surf cam is showing heaps of people out there, so that one wave must be amazing!”).

Ultimately, for the kea, the decision depended on the weighting assigned to each individual factor. This level of reasoning is no trivial task, and has so far been demonstrated only in humans. While chimps can account for social cues, they haven’t been found to simultaneously do the same for physical cues. 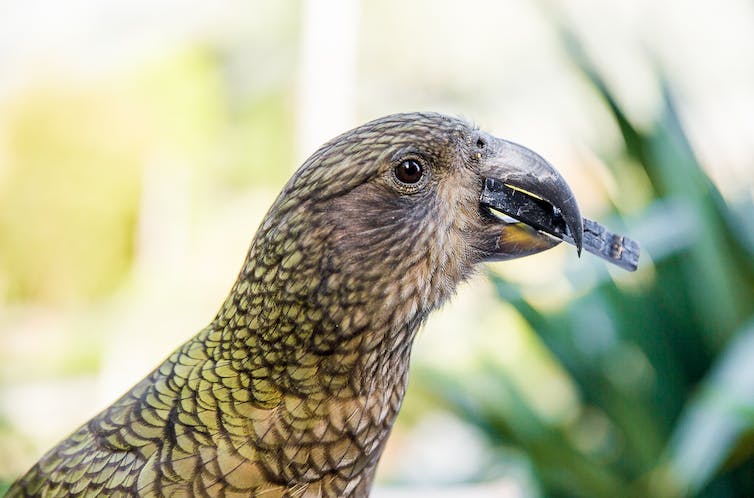 Not only did Kea parrots consider social information in their decisions, this information also came from members of a different species. They evaluated human social behaviour.

Also, the authors demonstrated the birds didn’t gradually learn to make the right choices, but were already “working it out” from the start. We know this because the number of “correct” choices in the first trial was too high to be achieved through pure luck.

We know logical inference has evolved in humans, but why in kea?

These parrots often forage for food by digging for hidden items under the dirt (often deep in the ground), using their beaks. Given they live among the huge mountainous landscapes of New Zealand’s South Island, we assume kea don’t dig randomly for roots and bulbs.

They probably consider whether the likelihood of digging at a certain location is “worth the effort”, and likely make this evaluation based on the health and type of leaves they can see.

Since kea are also a reasonably social species, there’s a good chance they look for food in places their fellows have already had success. They can often be spotted flocking to the same plant for berries.

Read more: By studying animal behaviour we gain an insight into our own

That said, these are informed guesses, and at this point we don’t precisely know why kea can evaluate probability with such sophistication.

However, it’s believed the cleverness of this parrot lies in its unusual ability to find a huge array of different types of food, both above and below ground.

Are there other species that can make decisions based on complex statistical inferences? Probably.

But whether or not we find them depends on asking the right questions of the right species, just as Taylor and Bastos have. 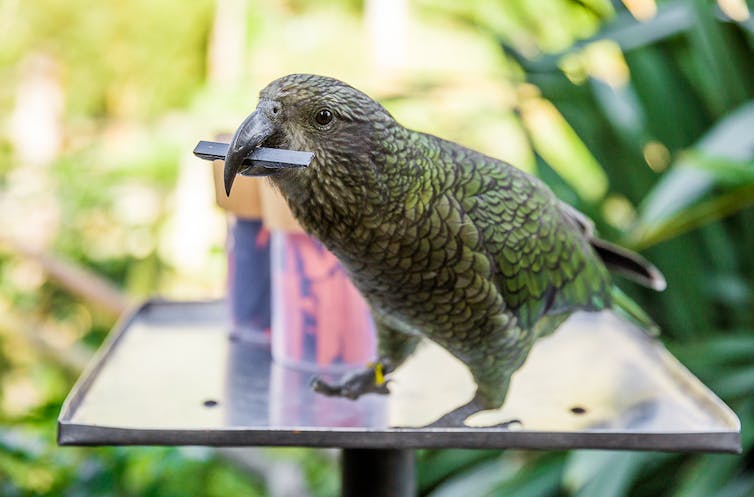 In 2017, the kea was crowned New Zealand’s bird of the year. Amalia Bastos, Author provided (No reuse)