I can vividly remember my first experience as a junior firefighter in 2006, tasked with completing a “backstop” defence. This meant standing directly between an advancing head fire (the most intense part of the bushfire) and vulnerable houses. It’s a dangerous tactic, yet often required when civilian lives are under threat.

As we braced, an eerie calm settled over the area and I mentioned to a senior firefighter that “it didn’t seem that bad”. He chuckled and simply said: “just wait”.

Within what seemed like just a few minutes, the leaves in the distant canopies began to dance and a small rumbling could be heard. I looked nervously at the senior firefighter. He adjusted my protective clothing, smiled and calmly warned me to “get ready”. 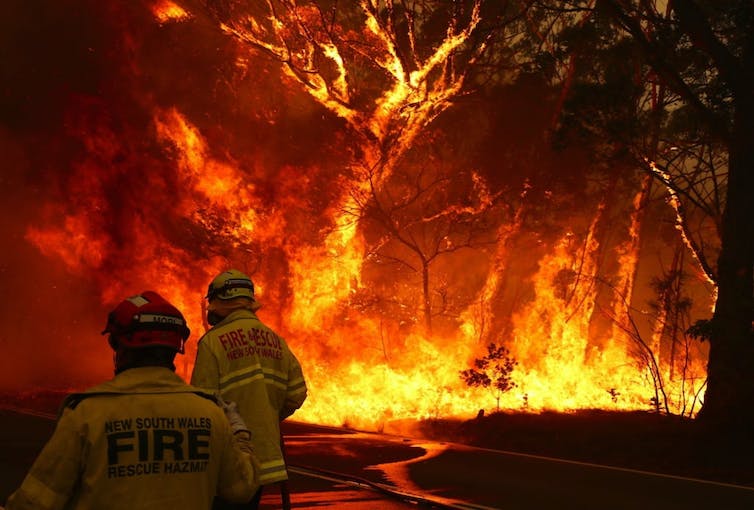 An out-of-control bushfire is one of the scariest situations a firefighter can face. Shutterstock

I had entered the trainee firefighter school at 23 and, like many other “veterans” of emergency or military services, I thought I was hard enough to withstand anything the fire and rescue service could throw at me.

After 14 years, multiple close calls, two shoulder reconstructions and permanent lumbar disc damage (not to mention a couple of master’s degrees and almost a PhD), I can categorically say firefighters are not indestructible.

In tonight’s episode of ABC’s You Can’t Ask That, firefighters discuss the shared experience of what it’s like to stare down an out-of-control bushfire. It’s one of the scariest and most dangerous situations a firefighter – career and volunteer alike – can face.

Read more: To improve firefighters' mental health, we can't wait for them to reach out – we need to 'reach in'

Back in 2006, the small rumble I heard grew to something resembling a freight train and every leaf and twig began to violently shake. What seemed like a fireball exploded out of the vegetation in front of me. Adrenaline and my training kicked in.

I can’t remember the rest of that job, but no houses were lost and no one was injured. That was just a small fire.

How we fight fires

Despite popular opinion, fighting a bushfire isn’t as simple as putting “wet stuff on hot stuff” (with the exception of small fires).

My experiences as a firefighter have led me to research how fire services can improve firefighters’ safety and the way we suppress large bushfires.

The strategies and tactics depend on many variables. This includes the weather, terrain, vegetation, the availability of resources, what exactly is under threat and the “defendability” of those assets, the experience of the firefighting crews and more. 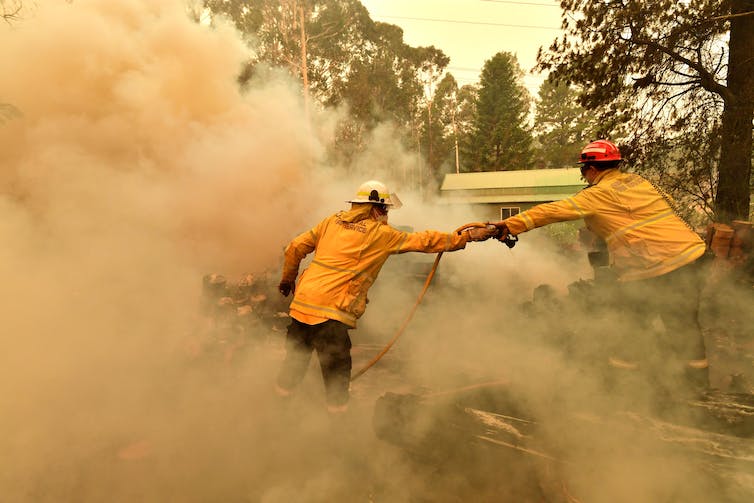 On paper, theoretical models of bushfire behaviour are neatly linked to “suitable” suppression strategies and tactics. But in reality, incident management teams and operational personnel on the fireground must analyse all available information – such as the dynamic and chaotic nature of the bushfire front – and decide which are most suitable.

Read more: There's only one way to make bushfires less powerful: take out the stuff that burns

This is particularly important when you consider how quickly the flank of a fire can transform into a large and significantly more intense head fire, one that can quickly overrun and engulf firefighters.

Even with this knowledge, in many instances firefighters will put themselves in harm’s way to ensure civilians are safe.

One question on You Can’t Ask That is “are you a hero?”. I definitely do not consider myself a hero. I have, however, been privileged enough to serve with them.

In the 2016 Yarloop-Waroona bushfires in Western Australia, I was tasked with defending a bridge on a critical evacuation route. My crew were overrun by fire, subsequently regrouping to lead the defence of an isolated community at Preston Beach with no way to escape.

We faced flame heights greater than 20 metres, rapid rates of spread, significant ember attack and visibility less than 10m. We then survived a burnover (where the fire truck is literally engulfed in fire) in a pine plantation where flames extended 20-30m above the treetops, and visibility dropped even further.

Below is an excerpt from the account I supplied to support a bravery commendation for the crews involved (which they subsequently received). It details a very small part of the crew’s actions in the initial 27 hours we were on the front line.

One of the firefighters reported they thought they saw a person around the house […] Given the threat to the life of occupants in the property, and believing there was sufficient time to do so, I led the crews into the property to protect the civilians.

Despite being directly impacted by the fire, SFF Johnston ran to the house to see if occupants were inside it. SFF Criddle attempted to provide a protective spray from the light tanker, only for the pump to fail. Despite the extreme and imminent personal peril, SFF Criddle and SFF Johnston did not retreat until they were sure no occupants were inside.

At this point it became evident the house was involved in the fire and was not suitable as a refuge. Based on that observation I made the decision to evacuate the crew down Peppermint Grove Road.

It is my belief that SFF Johnston and SFF Criddle exposed themselves to extreme peril, despite equipment failure, to ensure the safety of civilians believed to be caught in the house. Their courage despite the threat of death by burnover was of the highest level.

Firefighting will always remain an incredibly dangerous occupation. The exposure to catastrophic bushfires will only increase as the effects of climate change continue to worsen.