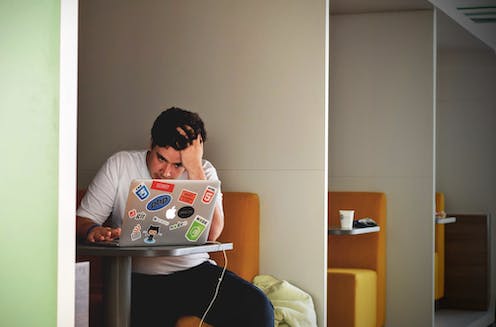 News and views about coronavirus has spread via social media in a way that no health emergency has done before.

Early on, snippets of information circulated on Chinese social media platforms such as Weibo and WeChat, before state censors banned discussions. These posts already painted a grim picture, and Chinese users continue to play cat and mouse with the Internet police in order to share unfiltered information.

As the virus spread, so did the social media conversation. On Facebook and Twitter, discussions have often taken place ahead of official announcements: calls to cancel the Australian Formula One Grand Prix were trending on Twitter days before the official decision.

Many will have come across (and, hopefully, adopted) hand-washing advice set to the lyrics of someone’s favourite song:

Widespread circulation of graphs has also explained the importance of “flattening the curve” and social distancing.

Social media have been instrumental in responding to COVID-19 myths and misinformation. Journalists, public health experts, and users have combined to provide corrections to dangerous misinformation shared in US President Donald Trump’s press conferences:

Other posts have highlighted potentially deadly assumptions in the UK government’s herd immunity approach to the crisis:

The circulation of such content through social media is so effective because we tend to pay more attention to information we receive through our networks of social contacts.

Similarly, professional health communicators like Dr Norman Swan have been playing an important role in answering questions and amplifying public health messages, while others have set up resources to keep the public informed on confirmed cases:

Even just seeing our leaders’ poor hygienic practices ridiculed might lead us to take better care ourselves:

Some politicians, like Australian Prime Minister Scott Morrison, blandly dismiss social media channels as a crucial source of crisis information, despite more than a decade’s research showing their importance.

This is deeply unhelpful: they should be embracing social media channels as they seek to disseminate urgent public health advice.

The downside of all that user-driven sharing is that it can lead to mass panics and irrational behaviour - as we have seen with the panic-buying of toiletpaper and other essentials.

The panic spiral spins even faster when social media trends are amplified by mainstream media reporting, and vice versa: even only a handful of widely shared images of empty shelves in supermarkets might lead consumers to buy what’s left, if media reporting makes the problem appear much larger than it really is.

News stories and tweets showing empty shelves are much more news- and share-worthy than fully stocked shelves: they’re exceptional. But a focus on these pictures distorts our perception of what is actually happening.

The promotion of such biased content by the news media then creates a higher “viral” potential, and such content gains much more public attention than it otherwise would.

Levels of fear and panic are already higher during times of crisis, of course. As a result, some of us - including journalists and media outlets - might also be willing to believe new information we would otherwise treat with more scepticism. This skews the public’s risk perception and makes us much more susceptible to misinformation.

Closer inspection revealed the photo originated from Houston during Hurricane Harvey in 2017 (the dollar signs on the food prices are a giveaway).

This case also illustrates the ability of social media discussion to self-correct, though this can take time, and corrections may not travel as far as initial falsehoods. The potential for social media to stoke fears is measured by the difference in reach between the two.

The spread of true and false information is also directly affected by the platform architecture: the more public the conversations, the more likely it is that someone might encounter a falsehood and correct it.

In largely closed, private spaces like WhatsApp, or in closed groups or private profile discussions on Facebook, we might see falsehoods linger for considerably longer. A user’s willingness to correct misinformation can also be affected by their need to maintain good relationships within their community. People will often ignore misinformation shared by friends and family.

Their ability to sustain communities is one of the great strengths of social media, especially as we are practising social distancing and even self-isolation. The internet still has a sense of humour which can help ease the ongoing tension and fear in our communities:

Younger generations are turning to newer social media platforms such as TikTok to share their experiences and craft pandemic memes. A key feature of TikTok is the uploading and repurposing of short music clips by platform users – music clip It’s Corona Time has been used in over 700,000 posts.

We have seen substantial self help efforts conducted via social media: school and university teachers who have been told to transition all of their teaching to online modes at very short notice, for example, have begun to share best-practice examples via the #AcademicTwitter hashtag.

The same is true for communities affected by event shutdowns and broader economic downturns, from freelancers to performing artists. Faced with bans on mass gatherings, some artists are finding ways to continue their work: providing access to 600 live concerts via digital concert halls or streaming concerts live on Twitter.

Such patterns are not new: we encountered them in our research as early as 2011, when social media users rallied together during natural disasters such as the Brisbane floods, Christchurch earthquakes, and Sendai tsunami to combat misinformation, amplify the messages of official emergency services organisations, and coordinate community activities.

Especially during crises, most people just want themselves and their community to be safe.