The unprecedented bushfires that struck the east coast of Australia this summer killed an estimated one billion animals across millions of hectares.

Scorched landscapes and animal corpses brought into sharp relief what climate-driven changes to wildfire mean for Australia’s plants and animals.

Yet the effects of fire go much deeper, quite literally, to a vast and complex underground world that we know stunningly little about, including organisms that might be just as vulnerable to fire, and vital to Australia’s ecological recovery: the fungi. 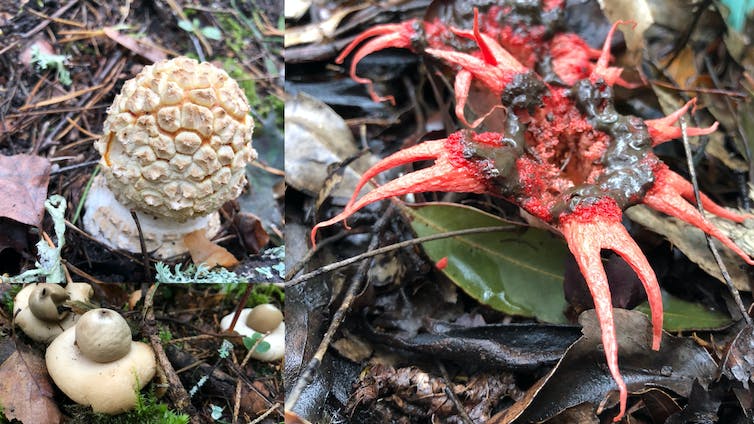 Plants and fungi: a match made underground

The aftermath of wildfires can make landscapes appear devoid of life. Yet under the ash beds lies a vast living network of fungi.

One group of fungi, called arbuscular mycorrhizal (AM) fungi, form symbiotic relationships with most of the world’s land plants. This means most plants and AM fungi rely on each other to grow and thrive. 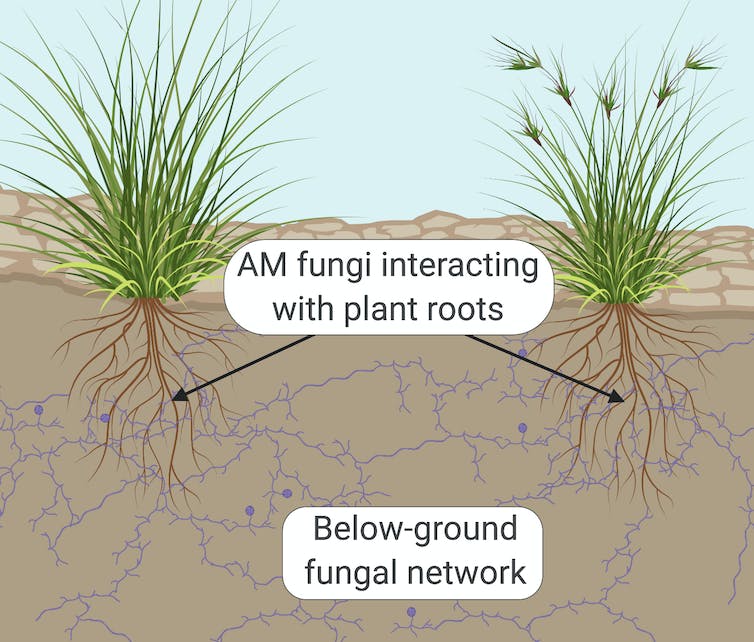 Fungi provide access to nutrients such as phosphorus, and plants provide carbon as sugar and fats. Adam Frew via BioRender

Extensive networks of AM fungal mycelium (a vegetative part of a fungus, akin to plant roots) explore the soil to access nutrients beyond the reach of their plant partners. The mycelium forms a fungal underground highway, transporting the valuable nutrients back to the plants.

Beyond nutrients, AM fungi can influence all aspects of plant ecology, such as seedling establishment, plant growth, defence against herbivores, and competition between different plant species. In fact, the number of species and abundance of AM fungi determine the success and diversity of plants.

In return for the nutrients they provide, AM fungi receive sugar made by plants through photosynthesis. For many species, this means without a plant host the fungi won’t last.

The responses of plants and AM fungi to fire are therefore deeply intertwined: the recovery of one is dependent on the other. Yet ecologists are only beginning to learn how fire affects fungi and what role they might have in hastening ecosystem recovery following wildfires.

Fungi and fire: what do we know?

Studies have shown fungi living near the soil surface are particularly susceptible to fire, often killed by high soil temperatures as the fire passes over. Fungi further below the surface are relatively more protected, and may provide the nuclei for recovery.

But, as with animals, surviving fire is only half the battle. When fire removes vegetation, it suddenly halts sugar and fats plants produce, delivered to the fungi below-ground.

Another challenge is the ways fire influences the underground world, such as changes in soil acidity, soil carbon, nutrient dynamics, and soil water. For instance, soils with more acidity tend to have less diversity of AM fungi. 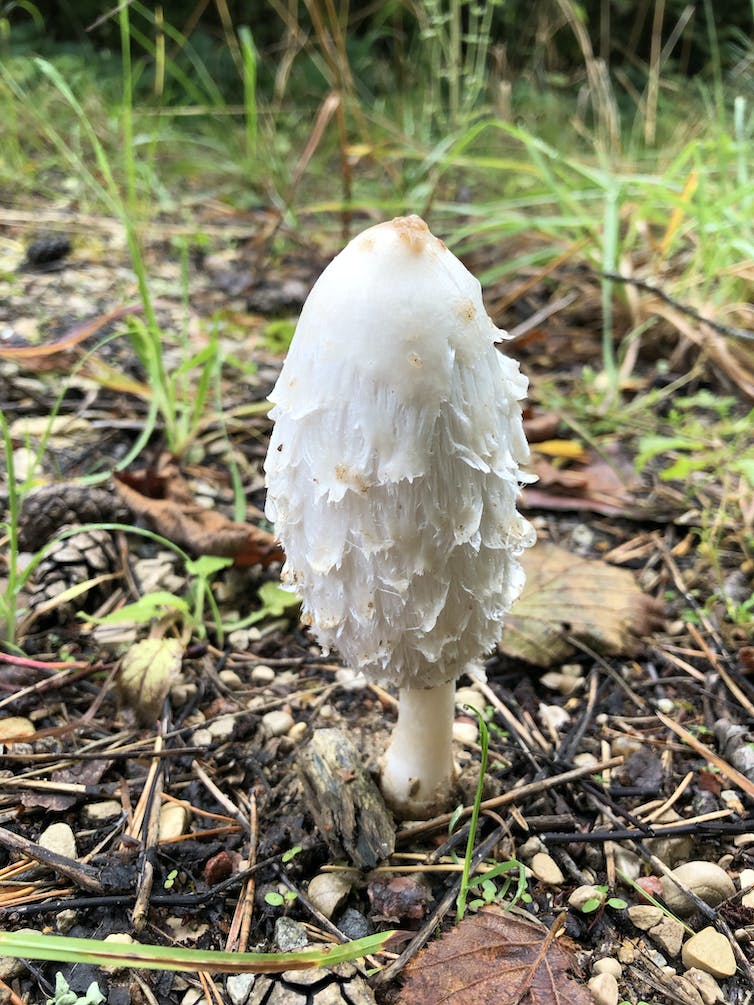 The combination of high temperatures and changed conditions appear to take a toll on fungi: a 2017 meta-analysis of 29 studies found fire reduces the number of fungal species by about 28%. And given the severity of last summer’s bushfires, we can expect that many fungal communities below the surface have been lost, too.

When fire hits, the community of AM fungi may lose less resistant species. This is important because studies show different species of AM fungi are better at supporting their plant partners in different ways. Some are better at providing nutrients, while others are more helpful with defending plants from disease and herbivores.

Changes in the number and types of AM fungal species can strongly determine how well plants recover, and can influence the whole ecosystem after fire. For example, plants could be left more vulnerable to disease if fungi supporting native plant chemical or physical defences are reduced by fire. 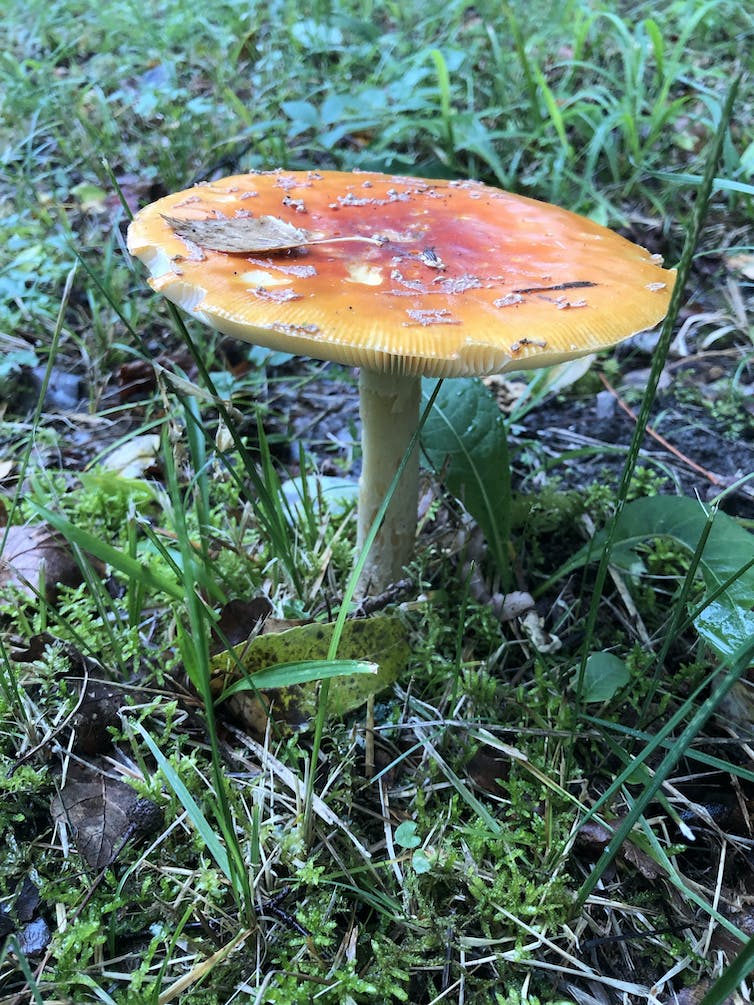 Since we know fungi are particularly important to plants in times of ecological stress, their role may be paramount in harsh post-fire landscapes. But while firefighters and wildlife carers have gone to inspiring lengths to protect plants and animals, we know little about how to help AM fungi recovery from the bushfires, or if help is even necessary.

Research from last year showed reintroducing AM fungal communities (usually as an inoculant or biofertiliser) to degraded and disturbed landscapes can increase plant diversity by around 70%, encourage recovery of native plants, and suppress invasive weeds. 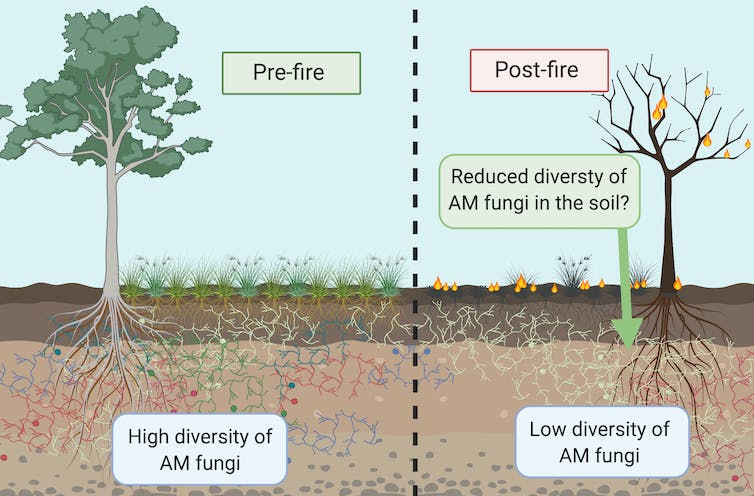 Fire tends to change what species of arbuscular mycorrhizal fungi are present in the soil as ecosystems recovery. Adam Frew via BioRender

Taking a similar approach and actively putting fungi back into fire-affected environments could ensure more rapid or more complete recovery of native vegetation, including the survival of endangered plant species threatened by the fires.

However, it’s important to consider which AM fungi are reintroduced. They should be species normally present in the local area, and suited to support recovering plant communities.

So as climate change leads to more frequent and intense bushfires, could fungi form a fundamental component of fire recovery efforts? Maybe.

But there is so much we’re yet to learn about these ancient and complex relationships. We’re only beginning to scratch the surface.