It’s not the end of the world. But with the Coronavirus running rampant, you could be forgiven for thinking so.

The Four Horsemen of the Apocalypse symbolically portray the four events that will occur before the end of the world: plague, war, famine, and death. It is the first of these that is striking fear into hearts worldwide. But with the rhetoric of our being “at war” with this disease, of “an invisible enemy”, a high mortality rate, and increasing food shortages, all four horsemen appear to be riding out.

How does God figure in all this? Within the religious doctrine of Divine Providence - that all that happens in the universe is under God’s sovereign control – we can identify five different responses.

The first is providential fatalism. According to this stance, my fate and the fate of the world have all been planned out in advance. Whatever happens is God’s will and there is nothing we can do to alter this plan. On this account, we should all just carry on as usual and should take no active precautions.

In its most extreme forms, this is interpreted in line with the Biblical statement: “They will pick up snakes in their hands, and if they drink any deadly thing, it will not hurt them” (Mark 16.18). Among some conservative Protestant churches in the United States, worshippers pick up venomous snakes and hold them up as they sing and dance. It is believed those who die do so because it’s God’s will.

The second response is providential activism, which holds to the belief that, as the African American spiritual puts it, “He’s got the whole world in his hands”. But this is interpreted to mean, even though God orchestrates all of history to bring about his purposes, he relies upon us to accomplish them.

Providential Activism holds that God knows and sees all, but it’s up to us to enact his plans.

While providential fatalism would see it as sinful to act against God’s will, providential activism would view acting to avoid catching a disease as in accord with God’s will. Thus, taking active measures to avoid contagion is to cooperate with divine providence rather than act against it. The mainstream Christian churches (Catholic, Anglican, the Uniting Church) along with the Jewish and Muslim communities are endorsing this activist approach.

Third, providential exclusivism would have us believe that God will look after those whom he has chosen for salvation. This exclusivist approach is common among conservative Protestant groups that divide the world into the saved and the damned on the criterion of having accepted Jesus Christ as Lord and Saviour.

The Pentecostal Hillsong Church in Sydney is following government requirements and its large weekend gatherings are going online. It is also recommending taking active measures to manage the disease. Yet it reassures followers that “no evil shall befall you, nor shall any plague come near your dwelling” (Psalm 91.10).

We are in agreement that this Convid-19 [sic] will not come near our dwelling or our church family […] knowing that we are all protected by the blood of Jesus. 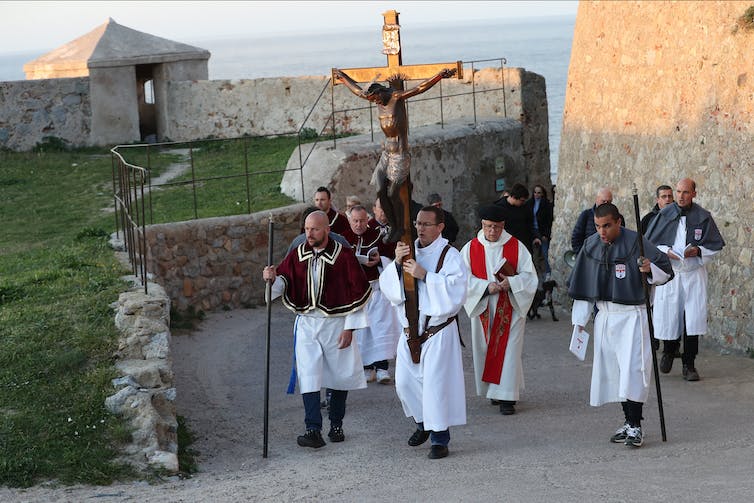 Local religious leaders take part in the procession of The Black Christ or The Christ of Miracles in Calvi, Corsica region, France, 16 March 2020. EPA/OLIVIER SANCHEZ

Throughout the history of Christianity, the most common response to plague has been providential punitivism. In its simplest form, pandemic disease is God’s punishment for our sins (or the sins of others) and a call for repentance.

It has good Biblical precedent: “Then the Lord sent a plague on the people, because they made the [golden] calf” (Exodus 32.35). The Jesuit priest in Albert Camus’ The Plague warned:

the unjust should tremble. In the vast granary of the universe, the implacable flail will thresh the human corn until the chaff is divided from the grain […] Beaten on the bloody threshing floor of pain, you will be cast out with the chaff.

The Coronavirus is yet to provoke providential punitivism in Australia. But, like the Coronavirus, it is spreading. A recent issue of Lifesite News, a conservative Canadian Catholic magazine, declared:

Of course the coronavirus is a punishment from God: all our sufferings are the consequence of sin; for us sinners, they are a just penalty for our sin; and God has complete control over what happens and how it affects us.

The downside of this response is that it makes God an arbitrary and cruel despot rather than a God of love and compassion.

The doctrine of providence is not completely set in stone. For, fifth, providential interventionism holds God can be persuaded to “change” his plans and end the plague because of our prayers to him to do so.

This may seem to contradict the notion of divine providence. But, as medieval theologian Thomas Aquinas put it, “our motive in praying is, not that we may change the Divine disposition, but that, by our prayers, we may obtain what God has appointed”. In short, God had built our prayers to him, and his response, into his original plan. You never get anything past Thomas Aquinas! 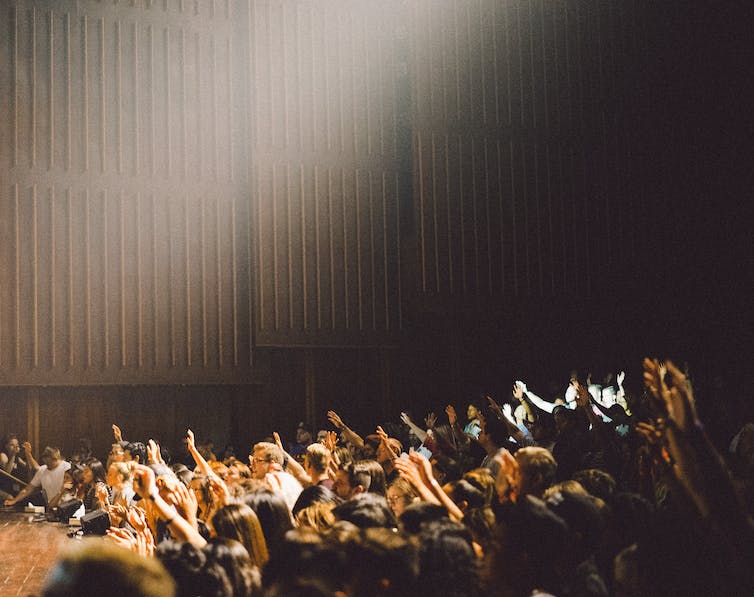 Prayers can change God’s plans, according to some believers. Edwin Andrade/Unsplash, CC BY

For the non-believer, none of the above attempts to relate the ways of God to the world is in play. The Coronavirus is nothing but a natural, if deeply unfortunate, event for which there is neither ultimate explanation nor ultimate meaning. It just is.

The virtue of the doctrine of the divine providence is that everything is going to plan in spite of appearances to the contrary. The problem is that it’s hard to believe, in the face of global pandemics, there is any divine plan at all. If there is, God might need to do a pretty radical rethink – and sooner rather than later.