Prime Minister Scott Morrison’s declaration of “war” against the COVID-19 pandemic requires a mobilisation of all available resources to the front-lines of the response – and this includes a bigger role for our armed forces.

So far, the most visible force on our streets has been the police. In NSW, the police are now patrolling supermarkets to enforce civilised behaviour and order among panic buyers. A special police task force has also been set up in Victoria to enforce social distancing practices in public places.

Read more: In the wake of bushfires and coronavirus, it's time we talked about human security

The military can also be a highly valuable asset in a national emergency, yet governments usually only deploy armed forces when a situation turns critical, such as this summer’s bushfires.

We have clearly reached such a critical point in the coronavirus crisis. Desperate times call for a more coordinated and strategic response and much greater involvement of the Australian Defence Force.

Modern military power is designed to respond to a comprehensive suite of conventional, asymmetric or unconventional threats. The latter includes chemical, biological, radiological and nuclear weapons, often referred to as CBRN.

Defence has a limited, but well-equipped, capability to respond to CBRN threats. The ADF has a specialised counter-CBRN unit, the Special Operations Engineer Regiment (SOER), which has been trained to respond to biological and bacteriological threats and operate in contaminated environments.

The Defence Science and Technology (DST) Group conducts specialised research and development to prevent and defend against CBRN attacks, including disease modelling.

In simple terms, the ADF can offer specialist epidemiological detection and decontamination capabilities. This includes the type of heavy equipment (such as CBRN-proof armoured personnel carriers) and protective gear that could be useful if the pandemic worsens.

This is in addition to a wide range of other functions the ADF can offer, from trained medics to transport logistics to policing functions.

The diggers move in

The ADF has been involved in the nation’s response to the COVID-19 outbreak from the early stages. For instance, the military offered its ground defence facilities, RAAF Base Learmonth and RAAF Base Darwin, to assist with the transfer of Australian nationals to quarantine stations on Christmas Island and Howard Springs.

But it wasn’t until the country moved into lock-down mode that it was asked to contribute much more.

Just this week, ADF personnel have been deployed in contact tracing teams to help NSW health officials track down those who came in contact with passengers on the virus-stricken Ruby Princess cruise ship. 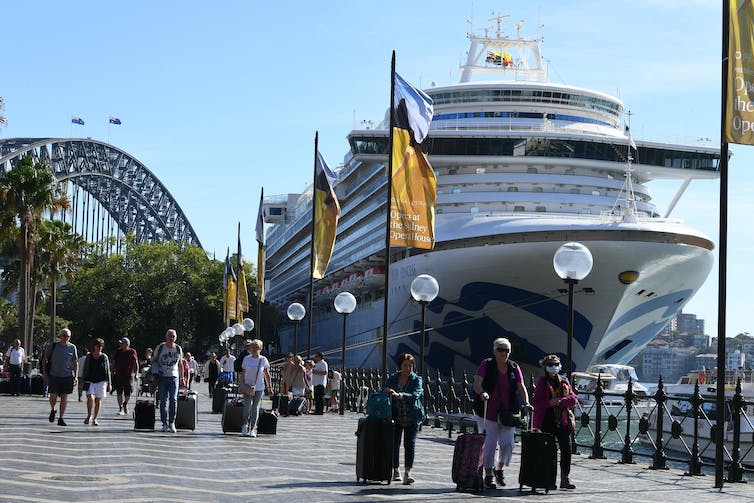 More than 100 people have tested positive from the Princess Ruby cruise ship, spread out across the country. Dean Lewins/AAP

ADF staff are also contributing clinical and epidemiological support to the Department of Health, while engineering maintenance specialists have been called in to assist the Victoria-based Med-Con medical supplier with the production of protective masks, sanitisers and other medical items.

Yet, this is likely to be just the beginning. For example, CBRN specialists could be providing much-needed training to police and other emergency services on how to operate in contaminated environments.

More defence medical staff, including mobile hospital units, decontamination equipment and emergency stocks of supplies, should be on standby to be deployed on short notice to worst-affected areas.

And if police resources become overstretched, military personnel could enforce quarantine orders or area shut-downs, though deploying soldiers on the streets may only be used as a last resort by the government.

If the government declares an even higher state of emergency, the military could also be called on to secure key elements of physical infrastructure (power stations, fuel depots, airports and sea ports, state borders and others), and protect key elements of supply chains. 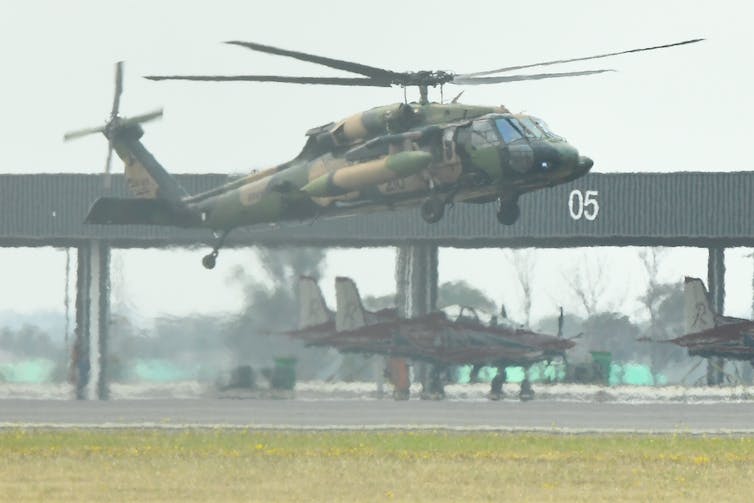 Military helicopters were used during the bushfires to help people stranded in remote communities. James Ross/AAP

What foreign militaries are doing

This is the strategy being embraced around the world as the pandemic worsens, with militaries being deployed in increasingly diverse tasks.

In the US, the military and National Guard are now undertaking a range of duties, such as

In the UK, up to 20,000 active defence personnel and reservists are in a higher state of readiness to respond to the pandemic, part of Operation Broadshare.

In Germany, about 3,000 military doctors and thousands of military reservists are also on standby, while France has mobilised 100,000 police officers and military personnel to enforce the country’s lock-down orders. A military field hospital also just opened this week in France to take the pressure off intensive care units.

In northern Italy, the military has been enforcing city lockdowns, in addition to transporting bodies of victims to places of cremation.

With limited resources on hand, Australia may even be in need of foreign military medical assistance if the pandemic worsens here, notably from the US. Australia received such assistance during the bushfire crisis, and Italy is currently getting similar aid from Russia.

Of course, even as the Australian military is prepared to counter the pandemic, it’s not immune to the threat.

This week, the ADF announced it is relocating non-essential personnel out of Iraq and Afghanistan out of concern the virus could spread there.

There have also been 11 confirmed cases of COVID-19 in the Department of Defence inside Australia.

For a small standing force like the ADF, a pandemic is as much of a challenge as for the rest of the nation. But given the military’s resilience to stressful environments, a bigger role for our soldiers may be what we need right now.