Famous paintings are flooding the internet – but not as we are accustomed to seeing them. These are not just reproductions. Literally coming to life, paintings are being re-enacted at home with art lovers posing their way into everything from Girl with a Pearl Earring to American Gothic.

Given social distancing, it’s not surprising portraits are the favoured genre. Being home-bound also means using what is available: a bath towel in the place of a luxurious Renaissance dress; pots and pans instead of medieval headgear; pets taking on surprising roles.

These images invoke a humorous game of spot the difference. One especially cheeky example shows a couple recreating a detail from Hieronymus Bosch’s Garden of Earthly Delights, with Bosch’s bizarre and whimsical world matched by contemporary verve.

These recreations are not just rooted in the boredom of quarantine. The impulse to recreate paintings has a long history that speaks to a need for shared cultural touchstones – and their subversion.

The recreation of famous paintings, or tableaux vivants (literally “living pictures”), was a party game in aristocratic circles in 18th-century France. The phenomenon then spread throughout Britain, Europe and America.

In Australia, there are records of these tableaux being enacted in theatres and households from the 1830s.

An 1871 American publication, Parlor Tableaux and Amateur Theatricals, capitalises on “the great desire among the rising generation to participate in this simple and elegant amusement”. It includes painstaking instructions for an evening of entertainment, including the number of tableaux (five to ten), types (classical and contemporary) and genres (serious and comic). 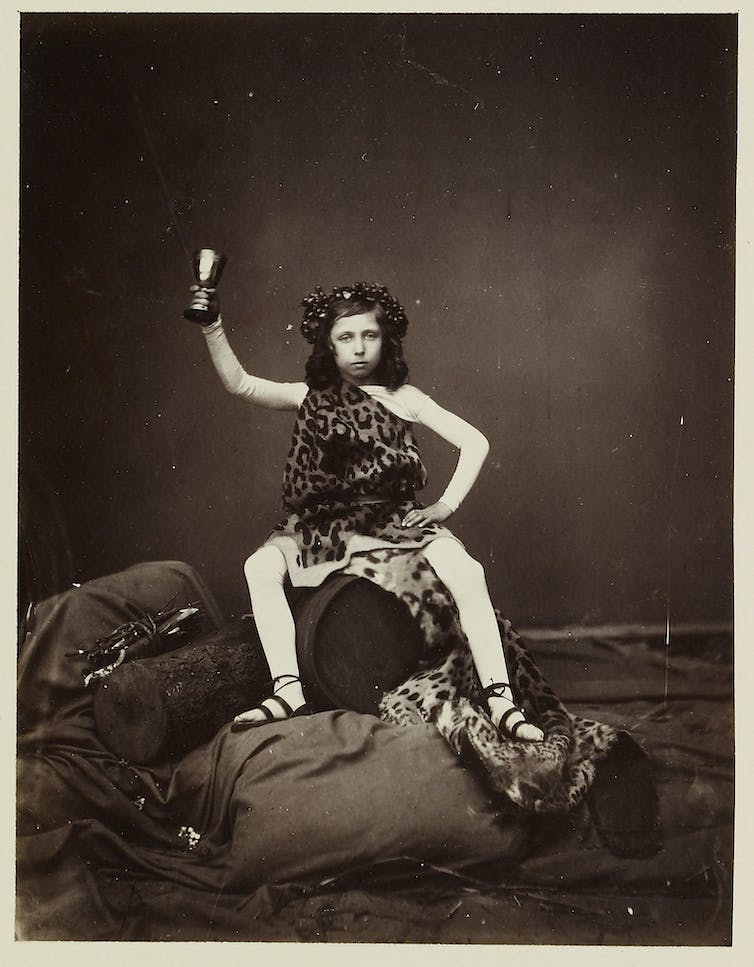 Prince Alfred styled as Bacchus, for Tableaux of the Seasons performed for Queen Victoria and Prince Albert in 1854. Royal Collection Trust / © Her Majesty Queen Elizabeth II 2020

Curtains would roll up to the spectacle of costumed figures posing with props and backgrounds from paintings by artists such as Titian, Michelangelo and Rembrandt. Shouts of appreciation or guessing games would ensue, with guests showing their knowledge of art history (or lack thereof).

The game was like charades, but silent and immobile. Part of the trick was the act of physical control needed to maintain the pose until the curtains rolled down and the actors prepared for another tableau.

Dress-up and posing have been documented as far back as classical antiquity. In festive pageantry of medieval and Renaissance Europe, parades and processions by rulers featured tableaux that were charged with important political and didactic functions.

Perhaps the most spectacular example of a tableau occurred in 1458 on the entry of Philip the Good, Duke of Burgundy, into Ghent. A contemporary account describes how over a hundred citizens greeted Philip the Good and his entourage in a recreation of the city’s celebrated altarpiece, Jan and Hubert van Eyck’s Adoration of the Mystic Lamb (The Ghent Altarpiece), painted in 1432. 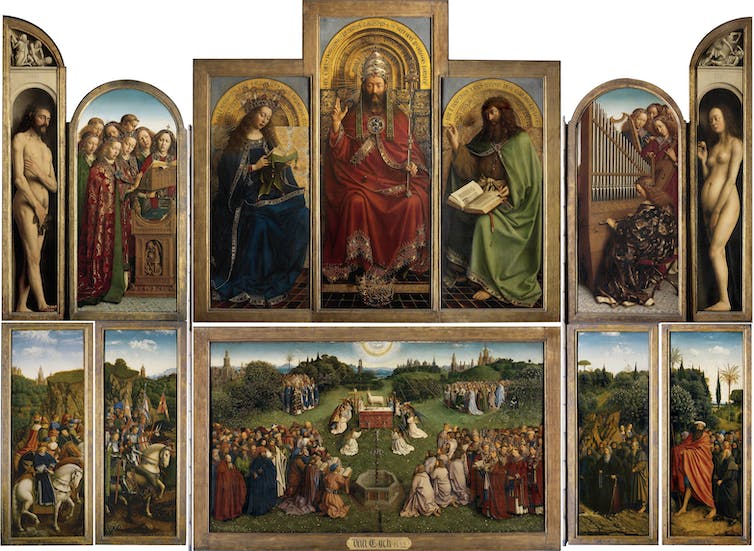 The Ghent Altarpiece from the Cathedral of St Bavo, Ghent, completed 1432.

This brilliant and complex polyptych presents a summation of Christian theology; its recreation would have been an incredibly ambitious undertaking.

The Ghent Altarpiece functioned as a shared cultural touchstone that its citizens could relate to. Only the nude figures of Adam and Eve would have been exempt from the recreation.

This was unlike the later tableaux of Victorian societies, when female nudes were acceptable and even encouraged. During the late 19th century, morality laws were evaded by the stillness of the models: as long as the women weren’t moving, they could present the tableaux as art education, rather than titillation.

In defence of these displays, the American poet Walt Whitman wrote if the sight of these tableux is considered “indecent” then:

the sight of nearly all the great works of painting and sculpture […] is, likewise, indecent. It is a sickly prudishness that bars all appreciation of the divine beauty evidenced in Nature’s cunningest work – the human frame, form and face. 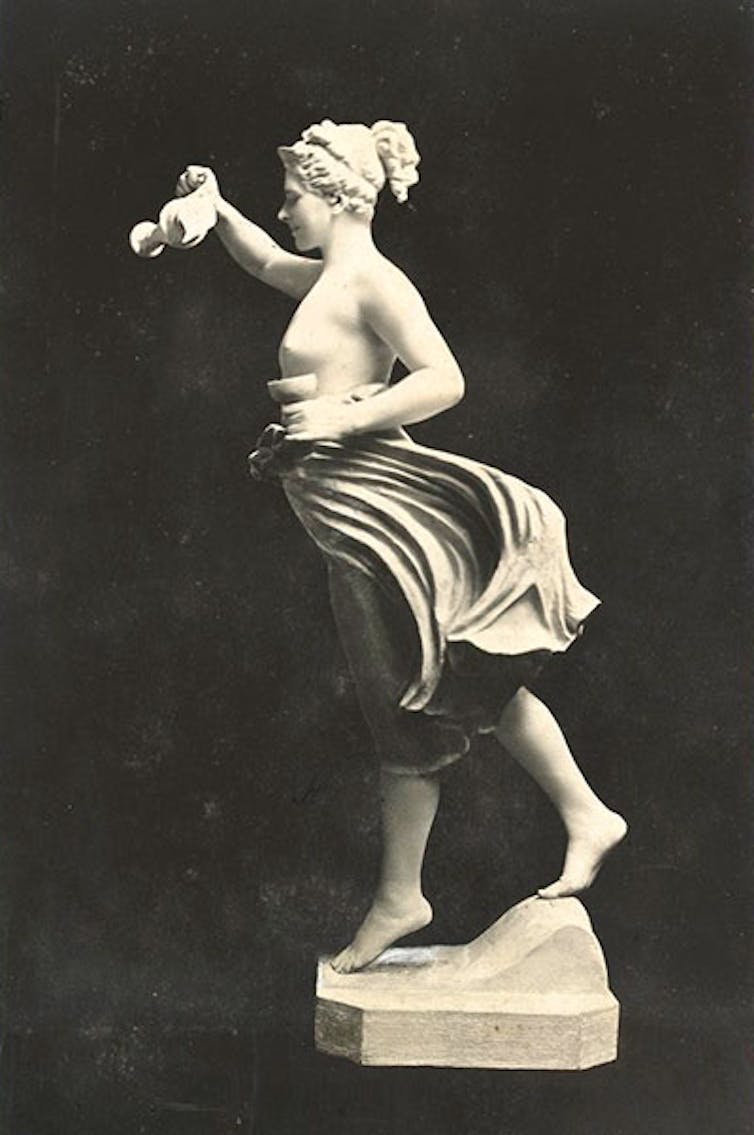 In her re-enactment, Sherman uses make-up, prosthetics and props – yet there is never any doubt that we are looking at Sherman. Her appropriation raises important questions about identity, feminism and the status of images.

In our era of self-isolation, institutions like the Getty are requesting recreations of works from their collections.

From homage to subversion, these recreations incite in us that jolt of recognition, nods of appreciation and boisterous laughter.

Most of all, tableaux vivants highlight an interest in shared cultural knowledge: an assumption that icons of art matter; that looking at and thinking about art is an essential activity.

As we face down weeks and even months in our homes, there also is a compelling participatory element: why just look at a masterpiece when you can be one?