On a recent trip to Cape York, I was privileged to sit with Kaurareg/Gudang Yadhaykenu man Uncle Tommy Savage, on a beach in the town of Umagico.

We listened as he sang a song called Markai an Ghule (meaning “ghost ship”), composed by his ancestors when James Cook arrived at Possession Island in August 1770.

A sad lilt permeated the song, an expression of the grief the Kaurareg people felt at having to hide their cultural system, while they determined what the arrival of this preternatural being and his big ship was all about. 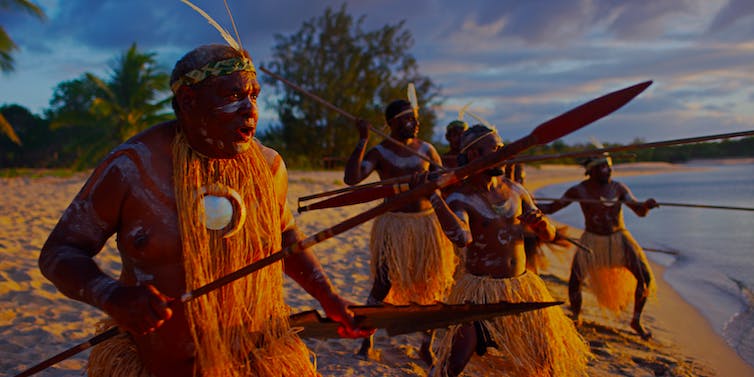 We recorded Uncle Tommy’s song for inclusion in The Message, a film commissioned by the National Museum of Australia and opening in April to coincide with 250 years since Cook arrived.

While researching the film, I spent much of last year travelling Australia’s east coast interviewing historians, curators and traditional owners, piecing together stories from the ship and the shore. Here are the stories that have stuck with me. 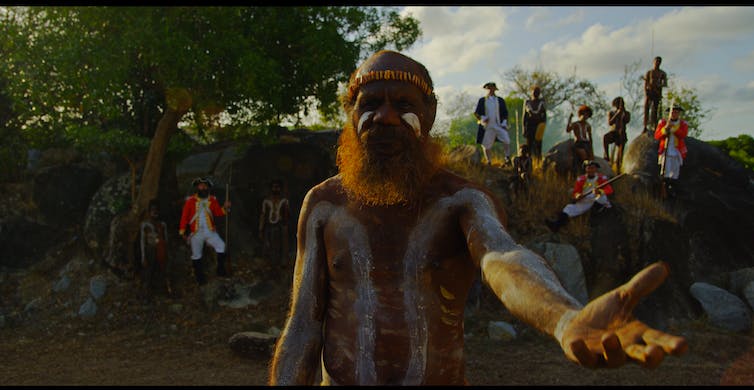 Uncle Fred Deeral as little old man in the film The Message, to be shown at the National Museum of Australia in April. Nik Lachajczak of Zakpage, Author provided (No reuse)

A voyage of the dead

What is so often described as Cook’s “voyage of discovery” has been viewed consistently by Indigenous people as a voyage of the dead; a giant canoe carrying the reincarnation of ancestral beings. 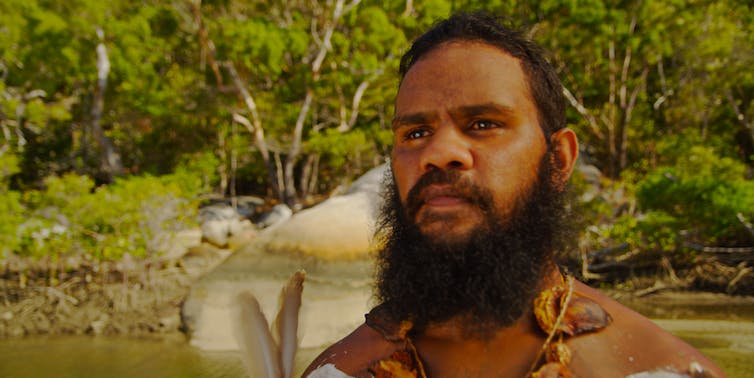 Ewan Deeral carries the message stick in the film The Message, to be shown at the National Museum of Australia in April. Nik Lachajczak of Zakpage, Author provided (No reuse)

At the first encounter in Botany Bay, two Gweagal warriors throw stones and spears to Cook, saying “warrawarrawa,” meaning “they are all dead” (not “go away”, as it is often translated).

Perhaps this explains why Banks and Cook write of Aboriginal people persistently declining any of the gifts they were offered. You would have to be crazy to take gifts from the dead!

The warnings about these ghostly visitors were quickly and accurately sent by fire, smoke and message stick up the coast, adding a deeper meaning to the many fires Banks and Cook noted as they travelled north (“Saw several smooks along shore before dark and two or three times afire in the night,” Cook writes).

The crew of the HMS Endeavour refused to return any captured turtles to the Guugu Yimithirr people. A scene from the author’s film The Message, to be shown at the National Museum of Australia in April. Nik Lachajczak of Zakpage, Author provided (No reuse)

A collision of beliefs

When the Endeavour smashes into the reef in Cooktown and is forced to stay for 48 days on the river for repairs, Cook and his crew captured “eight or nine” turtles (tellingly, Banks refers repeatedly to “our turtles”).

A contingent of local Guugu Yimithirr men board HMS Endeavour and try to take at least one turtle back, but Cook’s men soon wrest it away – refusing to share or acknowledge the possibility they’d taken too many.

Lamenting this environmental loss, a group of warriors light the grass fires in protest (“I had little Idea of the fury with which the grass burnt in this hot climate, nor of the dificulty of extinguishing it when once lighted”, Banks writes) and Cook shoots one of the Guugu Yimithirr men. 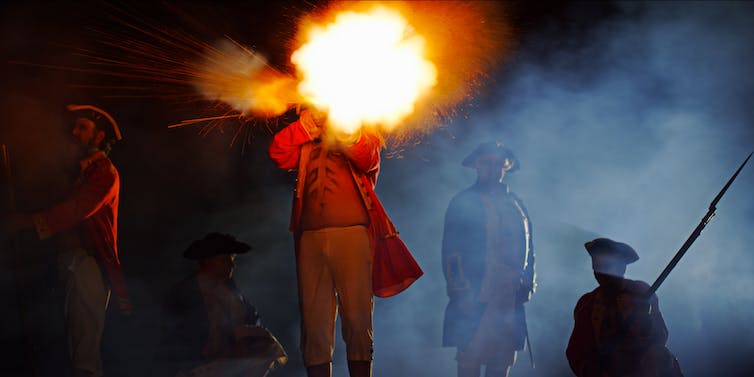 After a dispute over turtles, Cook writes ‘we were obliged to load a musket with a small shot to fire at one of them, which drew blood.’ Nik Lachajczak of Zakpage, Author provided (No reuse)

The rising tension is then released by an older man who stands forward in an extraordinary act of governance and breaks the tip off a spear to signify “weapons down”.

‘The little old man now came forward to us carrying in his hand a lance without a point,’ Banks wrote in his journal. A scene from the author’s film The Message, to be shown at the National Museum of Australia in April. Nik Lachajczak of Zakpage, Author provided (No reuse)

‘… in reality they are far more happier than we Europeans’

The incident brought together threads still relevant in Indigenous-settler relations today: environmental care, reconciliation and cultural governance. And this collision of beliefs, it seems, was not lost on Cook.

As he sailed off from the tip of Cape York, Cook wrote an unusual diary entry:

From what I have said of the Natives of New-Holland, they may appear to some to be the most wretched people upon Earth, but in reality they are far more happier than we Europeans; being wholy unacquainted not only with the superfluous but the necessary conveniencies so much sought after in Europe, they are happy in not knowing the use of them.

They live in a Tranquillity which is not disturb’d by the Inequality of Condition: The Earth and sea of their own accord furnishes them with all things necessary for life; they covet not Magnificent Houses, Houshold-stuff […]

[…] they live in a warm and fine Climate and enjoy a very wholsome Air, so that they have very little need of Clothing and this they seem to be fully sencible of, for many to whome we gave Cloth to, left it carlessly upon the Sea beach and in the woods as a thing they had no manner of use for.

In short they seem’d to set no Value upon any thing we gave them, nor would they ever part with any thing of their own for any one article we could offer them; this, in my opinion argues that they think themselves provided with all the necessarys of Life and that they have no Superfluities —

For a working class man from Georgian England to see and appreciate the cultural values of Indigenous people is remarkable, considering that clarity of understanding is only just dawning on the average Australian.

The role of Joseph Banks

After all the conversations I’ve had over the last year with historians, traditional owners and curators, I’ve come to believe that history has been unkind to Cook. He is blamed for the many wrongs inflicted on my people.

Joseph Banks, however, emerges as a much colder, unkinder figure. It was Banks who convinced the British government that Australia would be perfect for a penal colony, given it could no longer send convicts to America.

Banks’s view that Australia was “thinly inhabited” (and he speaks frequently of savagery and simplicity of its people) fed directly into the declaration of terra nullius. Banks never went inland, but declared with great hubris that it was almost certainly “totally uninhabited”.

In the end, the decisions made in the 18 years between Cook leaving and the First Fleet arriving have shaped modern Australia far more than those early fleeting ethereal encounters. 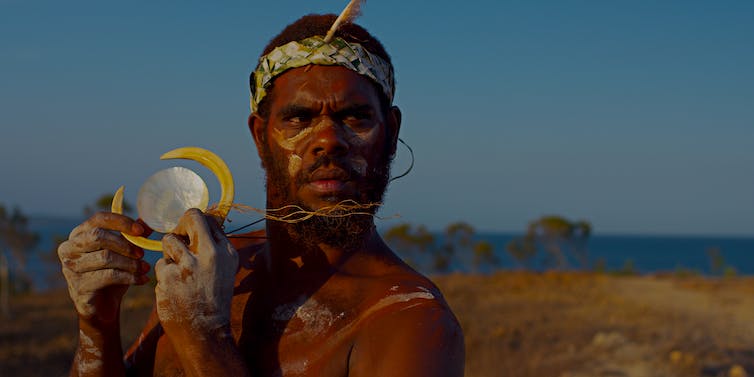 Quintin Gowa warns his people in the film The Message, by Alison Page of Zakpage. Nik Lachajczak of Zakpage, Author provided (No reuse)

There are so many lost chapters in the story of Australia.

But as a nation, we can invite Uncle Tommy and his people – and all those other excluded songs and stories – to come out of hiding.

Revealing our shared history is the only way to make peace with those ghostly visitors of the past. But we will only find that peace in the truth and it’s the truth of our history, which will be our new voyage of discovery.

Alison Page was commissioned by the National Museum of Australia to create the film The Message for the museum’s Endeavour 250 exhibition, opening on April 8.