By international standards, Australia has had considerable success in containing the COVID-19 outbreak. As the number of new cases continues to decline, several states have announced they will begin to ease restrictions.

But debate about when and how we can ease physical distancing measures safely remains ongoing.

Modifying restrictions too soon, or making too many changes concurrently, could easily see a resurgent second wave of COVID-19.

To prevent this, we need to ensure any new infections in the community are detected promptly, and their contacts traced to contain transmission as early as possible.

Sentinel surveillance – or testing randomly in the community – could help us with this.

Testing provides our window onto the extent of infection in a population: where we look determines what we see.

The differences in reported case numbers between different countries can be at least partially attributed to different levels of testing. For example, if testing is restricted only to patients in hospital, less severe cases won’t be counted.

To be confident transmission doesn’t increase as distancing measures are lifted, we will need to test broadly, and strategically, across the population.

Read more: What might trigger a return to 'normal'? Why our coronavirus exit strategy is ... TBC

So who do we test?

Testing is a finite resource: health services need physical kits to conduct the tests, and laboratories need time and people to analyse samples. So testing efforts are concentrated where they’re most likely to aid control efforts.

The decision to test someone is guided by testing criteria, which in Australia are set at the state and territory level. 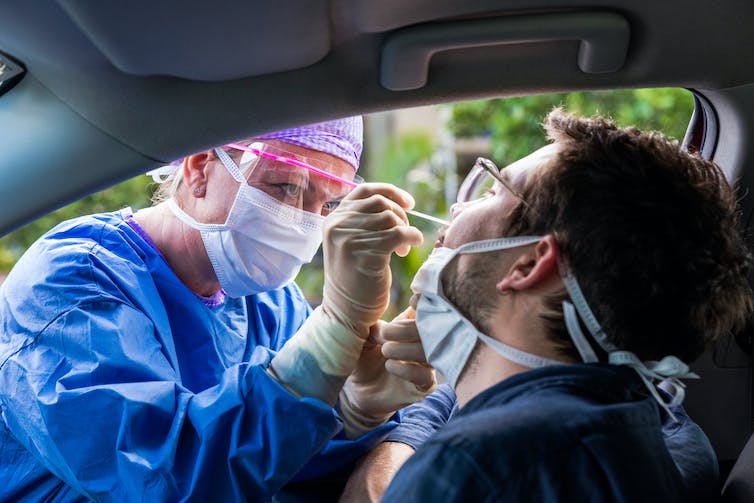 Testing will be particularly important as we start to ease restrictions. Shutterstock

In the early stages of Australia’s outbreak, the greatest risk of infection was among people arriving from overseas. Testing understandably focused on this group, as well as people who had been in contact with confirmed cases.

At that time, and since, Australia has maintained one of the highest rates of testing globally.

As the number of cases imported from overseas fell, attention shifted to transmission occurring in the community. From early April, testing criteria were expanded nationally to include any health-care and aged care workers who developed respiratory symptoms. 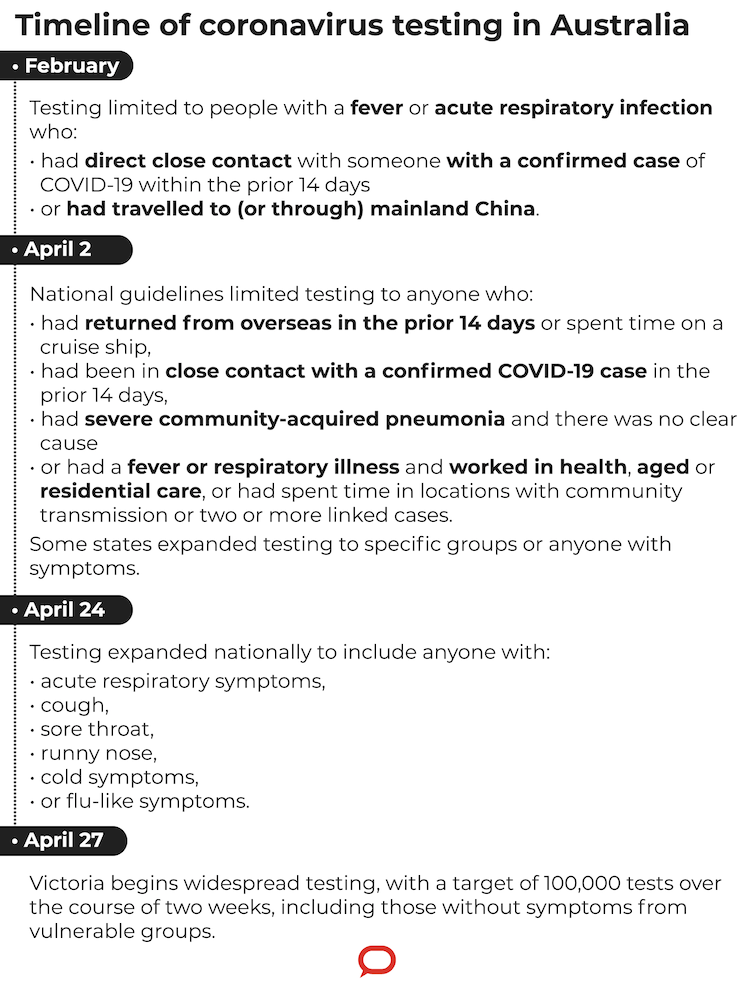 The Conversation, CC BY-ND Where are we now? Last week, testing criteria were broadened even further. Anybody in Australia experiencing symptoms of respiratory infection can now get a test. We know COVID-19 can manifest with a broad range of potentially minor symptoms, so this approach should help highlight milder cases of infection. But even this level of testing might not be enough to provide early warning of and prevent an impending outbreak. Read more: More testing will give us a better picture of the coronavirus spread and its slowdown While we still have more to learn about the virus, there is evidence that infected people may be able to transmit infection to others before they develop symptoms. This poses a challenge when public health surveillance is based on symptoms. By the time someone realises they’re sick and presents for testing, they may already have been shedding virus and infecting others. Meanwhile, other people may experience trivial or no symptoms. We don’t know yet whether these people can spread infection. 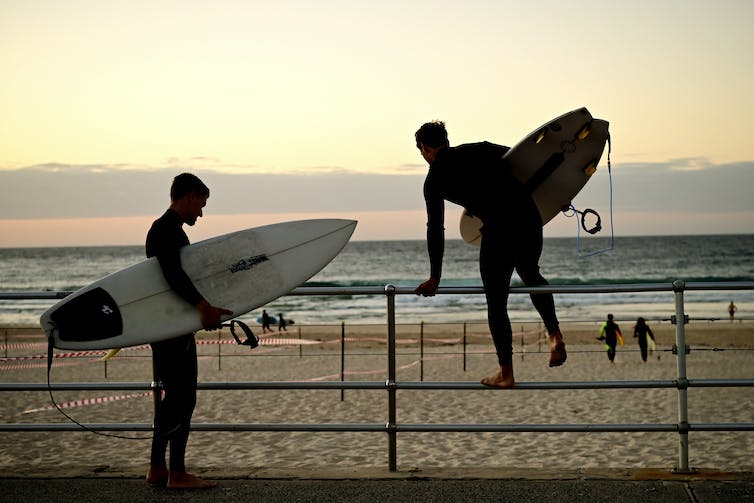 Some people may have coronavirus but not show any symptoms. Joel Carrett/AAP Physical distancing measures currently limit the number of contacts at risk from potentially infectious people without symptoms. Once we lift these measures the number of people we have contact with will increase. So identifying infected people with no symptoms is crucial, especially now. We need to consider more active approaches to surveillance. Enter sentinel surveillance Sentinel surveillance involves testing people across the community, including those who are apparently well, in order to discover unseen transmission. Often, sentinel surveillance programs involve a prearranged set of health-care providers. For example, the Victorian Sentinel Practice Influenza Network (VicSPIN) is a general practice-based program that provides information about the proportion of patients with influenza-like illness. Government and public health agencies are still determining the appropriate design of a sentinel surveillance program for COVID-19 in Australia. New Zealand recently established sentinel community testing centres to randomly test volunteers with no symptoms of COVID-19. In the UK, where prevalence is much higher, there have been calls for mass testing of the entire population on a regular basis to help bring the outbreak under control. But such a resource-intensive approach would be challenging to implement. It’s more likely a sentinel surveillance system in Australia would aim to test a geographically and demographically diverse sample of the population. Additional emphasis may be placed on groups at higher risk should an outbreak occur, such as those in detention facilities or group residential settings. Read more: To get on top of the coronavirus, we also need to test people without symptoms Sentinel testing could involve, for example, testing every fifth person a particular GP sees on one day, every tenth person leaving a shopping centre on one day, or a selected group of frontline workers without symptoms. While we don’t yet have a national timeline, sentinel surveillance is likely to form the next step in Australia’s testing regime. Victoria has already commenced wider scale testing, pledging to test up to 100,000 people over two weeks, including volunteers from vulnerable settings without symptoms.