In September 2005, before an audience of some of the most powerful business figures in the United States, then US Deputy Secretary of State Robert Zoellick unveiled his “responsible stakeholder” formula for China’s global engagement.

China is big and growing… For the United States and the world the essential question is how will China use its influence… We need to urge China to become a responsible stakeholder in that system.

This is how the China as a “responsible stakeholder” template for the West’s conduct of relations with an emerging power was born. It was not a superpower at that stage, but a rising one.

Many Americans worry that the Chinese dragon will prove to be a fire breather. There is a cauldron of anxiety about China.

If there was a “cauldron of anxiety” then, it is “cauldron of paranoia” now as the US slips towards a new Cold War.

It’s not there yet, but the possibility of a permafrost can’t be discounted. This would include a decoupling of the US and Chinese economies and a deepening technology war in which competing technologies would seek to get the upper hand inside and outside cyberspace. It would also include an all-out arms race.

The Huawei decision is one of several designed to squeeze Chinese access to US technology, and in the process disrupt global supply chains.

China regards the US campaign against Huawei as highly provocative, if not war by another means.

These are sobering moments as the world contemplates getting dragged into a “cauldron” of superpower tension not witnessed since the 1950s.

Read more: Australia has dug itself into a hole in its relationship with China. It's time to find a way out

Middle-sized players like Australia risk getting trampled. Prime Minister Scott Morrison is discovering to the cost of his country’s agriculture and mining sectors that it is better to stay out of the way of bull elephants in a global jungle. His ill-advised solo intervention in calls for an independent inquiry into a pandemic has backfired as China picks off vulnerable Australian exports for reprisals.

An American “cauldron of anxiety” has spilled over.

I was in that New York City hotel ballroom for the Zoellick speech as North American correspondent for The Australian Financial Review. I had no doubt it was a significant moment in America’s attempts to address an emerging challenge from an economically resurgent China, but this challenge needed to be kept in proportion.

Bear in mind China’s president at the time was the cautious bureaucrat, Hu Jintao. The country had not yet left behind paramount leader Deng Xiaoping’s advice to colleagues that when it came to demonstrating China’s newfound might, it was better to “hide your capabilities, bide your time”.

It was seven years before the “China first” Xi Jinping became China’s most powerful leader since Deng, and possibly since Mao Zedong himself.

Zoellick’s speech was delivered more than a decade before a New York property developer named Donald Trump became an “America first” president ill-equipped to deal with complexities involved in managing a relationship with a surging China. 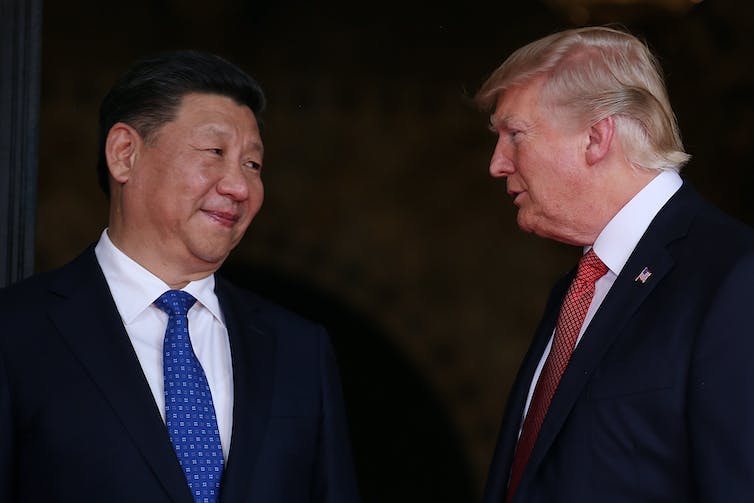 AAP/EPA/Carlos Barria Trump’s mixture of bombast, bellicosity, prejudice, impulsiveness, and apparent lack of a sense of history makes him particularly ill-suited to cope with the world’s biggest foreign policy challenge since the second world war. That includes the Cold War with the former Soviet Union. That conflict could be managed by a policy of containment and mutually assured destruction. At a time when the western alliance cries out for leadership, America is consumed, even torn apart, by internal divisions. Those divisions are likely to be rubbed raw in this year’s presidential election, in which China will be the focus of the sort of fearmongering that characterised American internal debates about the Soviet Union in the 1950s. Trump’s contribution to that debate in the midst of a pandemic may not be surprising given his intemperate use of language generally, but in the circumstances it was shocking nevertheless. This is what he tweeted on May 20: Let that sink in. The latest occupant of the Oval Office, successor to some of the great figures of world history, has accused China of being responsible for “mass worldwide killing”. China’s mishandling of the early stages of the coronavirus pandemic deserve investigation and censure, but Trump himself bears responsibility for his own “incompetence” and that of his administration in managing America’s response to the crisis. In its early stages he declared the virus would simply vanish. He used the word “hoax”, allegedly cooked up by his political enemies, to dismiss the contagion. As a consequence valuable time was lost in responding. America now has the worst record globally in dealing with the pandemic. Things being equal this will constitute a significant drag on Trump’s re-election prospects, hence his flailing about in search for scapegoats. Leaving aside American domestic politics – the Democrats will not want to be accused of being soft on China in a presidential election cycle – the much bigger question is the extent to which the pandemic will disrupt, even overturn, a globalising world. A new, shaky world order The journal Foreign Policy has made a useful contribution to the debate in its latest issue – The Great Decoupling – in which it seeks to frame what is happening now historically. History is not kind to a process in which states decouple, pull up the drawbridges, roll back trade and investment ties and, in the United Kingdom’s case, depart a trading bloc that had served it well. America is far from the only nation state succumbing to the forces of nationalism and populism. It is a worrying trend for open-market trading countries like Australia, dependent on increasing economic integration. This is how Foreign Policy framed issues involved in what it perceives to be a disrupted moment in history in which a status quo power is being obliged to confront the reality of challenges to its brief moment as a hyperpower following the fall of the Berlin Wall. The threat of the great decoupling is a potentially historic break, an interruption perhaps only comparable to the sundering of the first huge wave of globalization in 1914, when deeply intertwined economies such as Britain and Germany, and later the United States, threw themselves into a barrage of self-destruction and economic nationalism that didn’t stop for 30 years. This time, though, decoupling is driven not by war but peacetime populist urges, exacerbated by a global coronavirus pandemic that has shaken decades of faith in the wisdom of international supply chains and the virtues of the global economy. Read more: US-China relations were already heated. Then coronavirus threw fuel on the flames This scenario might be regarded as alarmist, even implausible, given difficulties that would arise in dismantling a highly integrated global economy. However, if a pandemic and response to it are a guide against the background of growing tensions between the US and China, the implausible becomes possible. In the past week, Trump has opined about “cutting off the whole relationship” with China. He has also speculated about not repaying US$1 trillion in debt to China. These are ridiculous statements, but the fact an American president in an election year could say such things is indicative of the sort of atmosphere that prevails in a country where a populist leader has been wounded by his own ineptitude. However, if the 2016 US presidential election demonstrated anything, it was that a significant proportion of the American electorate will embrace an “America First” mindset that is antagonistic to the outside world. Nationalistic Sinophobes on Trump’s immediate staff feed his populist impulses and his anti-China rhetoric at the risk of deepening a global recession or even depression. If we have another pandemic, or environmental issues, or financial sector issues, or Iran, or North Korea, how effective are you going to be if you don’t have a working relationship with China? It’s a good question.