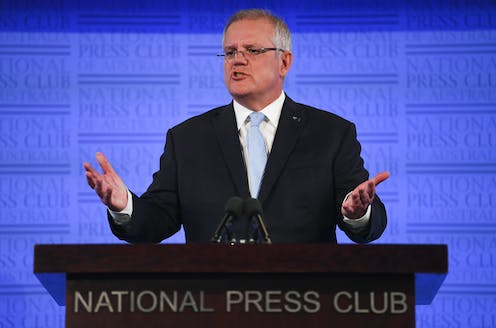 Scott Morrison has indeed taken to heart that adage about not wasting a crisis. He insists he is going to put to advantage the opportunity brought by these most unfortunate circumstances.

His plan for a government-employer-union-community effort to reform this country’s industrial relations will, if it comes off, be a substantial achievement (although the actual magnitude would depend on just how much was done).

Politically, success would give Morrison something positive for the next election, which will be fought in the testing circumstances of likely high unemployment and sectors of the economy still struggling.

Labor would be outflanked.

If Morrison’s effort ends as a busted flush, he’ll say he tried and move on to something else.

Despite his pragmatism, Morrison aspires to be remembered as a leader who delivered reform. Remember when as treasurer under Malcolm Turnbull, he pushed strongly to change the GST and talked up his mission?

In Tuesday’s address to the National Press Club, he was the ambitious consensus prime minister, declaring “we’ve booked the room, we’ve hired the hall”, to get everybody to the table in pursuit of better industrial relations arrangements.

The present system had “retreated to tribalism, conflict and ideological posturing,” he said. It had “settled into a complacency of unions seeking marginal benefits and employers closing down risks, often by simply not employing anyone”.

As a “good faith” gesture, the government won’t pursue another Senate vote on its controversial Ensuring Integrity bill which would give the Federal Court the power to cancel the registration of a union or an employer organisation and introduce a public interest test for the amalgamation of such organisations. The Senate rejected the legislation last year.

In his speech Morrison announced a structure for talking, and broad topics to talk about. Industrial relations minister Christian Porter will chair five groups - they will consider award simplification; enterprise agreements; casuals and fixed term employment; compliance and enforcement, and greenfield agreements for new enterprises.

“Membership of each group will include employer and union representatives, as well as individuals chosen based on their demonstrated experience and expertise and that will include especially small businesses, rural and regional backgrounds, multicultural communities, women and families,” Morrison said.

The process will run until September. “It will become apparent very quickly if progress is to be made,” he said.

Indeed, it is not as if Porter is starting from scratch. After being appointed industrial relations minister following the 2019 election, Porter set up a process of IR reform which has produced several discussion papers and consultations on a range of issues.

A frustrating feature of the Coalition government, if you take it as a whole from its election in 2013, is its failure to finish what it starts. Key reform processes have previously begun but run up dry gullies or been overtaken.

For instance Tony Abbott commissioned white papers on taxation and federalism. After overthrowing Abbott, Turnbull aborted the white papers. Turnbull in turn flirted with tax change, not just possible GST reform but even the states raising their own income tax. Tax reform as well as federalism are among the issues Morrison has in his sights.

As for Morrison’s declared determination to get a better system for training and skilling workers for the jobs of the present and the future – we have heard this from governments of both stripes for a very long time.

Of course, the past isn’t necessarily a guide to the future, and Morrison’s handling of the pandemic points to his adaptability as a leader.

His agenda appears broad and ambitious (although we can’t be definitive ahead of the detail). He has talked skills and industrial relations this week, but there’s also deregulation (another recurring Coalition theme) and energy as well as tax and the federation.

Admittedly it is not a matter of all-or-nothing. Worthwhile but limited changes would be better than not making the effort.

The extent to which Morrison succeeds will depend on a number of factors.

On industrial relations, it is whether employers and unions put the interests they share above those that divide them – whether each side will be willing to give ground for a larger common cause. The chance of agreement will differ according to the issue.

ACTU secretary Sally McManus responded on Tuesday: “The ACTU will measure any changes to industrial relations law on the benchmarks of: will it give working people better job security, and will it lead to working people receiving their fair share of the country’s wealth?”

They could be challenging benchmarks.

A co-operative discussion will go against the instincts of some of the Coalition’s anti-union hardliners, and be resisted by some in McManus’s constituency.

Asked his message to people in his own party who might see this as an opportunity to finally neuter the union movement, Morrison said: “I think everybody’s got to put their weapons down on this”.

On making progress with reforms involving federal-state relations, including the training system, the attitude of the states will be crucial.

Morrison lauds the national cabinet, and the government contrasts it with the more bureaucratic Council of Australian Governments processes.

COAG deals with everything, and is mostly putting in place measures for the longer term. Inevitably, interests will diverge and corners are harder to cut (which doesn’t mean COAG’s working can’t be usefully shaken up).

Even if national cabinet continued, on some of these reform measures the states would probably behave more like they were in COAG - that is, there’d be more “process”.

Finally, there’s whether a crisis really does produce a climate conducive to reform.

It certainly concentrates attention, turns the page, sweeps away most else. (Asked on Tuesday about the timetable for the religious freedom legislation and the proposed anti-corruption body, Morrison had no answers. It was almost as though they were from another era.)

The road out of this crisis will be very tough for many people. Extensive reform is often painful. Whether the Australian public will be in the mood for it as they cope with the aftermath of such a trauma is an open question.