The need for public housing is greater than ever before – Australia has a shortfall of at least 433,000 dwellings. Using public land for public housing is a no-brainer. But, at the time of writing, the Victorian government is preparing to sell over 2,646 hectares of land. Our analysis reveals 24 of these sites are suitable for delivering high-quality, well-located public housing in places where the need is high.

This is nothing new. As our recent research has shown, successive governments in Victoria have been systematically selling public land.

The twin health and economic crises created by the COVID-19 pandemic will add to the shortfall of public housing. And yet the government shows no sign of rethinking its land sales.

Read more: The need to house everyone has never been clearer. Here's a 2-step strategy to get it done

We examined the land parcels listed as being prepared for sale by the Victorian Department of Treasury and Finance in April and May 2020. We assessed each parcel for suitability as residential, based on zoning and on liveability criteria from the Australian Urban Observatory.

Our analysis shows 90.9 hectares, across 24 individual sites, would be suitable for public housing. Around 55 hectares is in metropolitan Melbourne. As the map below shows, other key sites are in regional centres such as Bendigo, Geelong, Mildura and Sale. (Scroll to resize and hover cursor over locations to see details of sites.)

The total cost would be A$405-540 million, assuming costs of $300,000 per dwelling. While this cost is higher per unit than some studies have suggested is possible, it provides a realistic path to a high-quality outcome.

Such investment would deliver an immediate public good with a lasting positive impact on Victoria. It would be a good first step in a long-term public housing works program.

The cost is relatively modest compared with other state investments such as the A$11 billion Melbourne Metro, the A$1.2 billion Comprehensive Cancer Centre and A$7.2 billion school building program.

Land is located in areas of high need

This available public land is located in areas with high priority housing needs. Using data from the Victorian Housing Register, we analysed where this need is significant. As the map below shows (hover cursor over each area for details), high numbers of people are applying for social housing in Melbourne’s west, north and outer south-east, and the central belt of Victoria.

Public land in these high-need areas is also being lost through the Victorian Government’s Public Housing Renewal Program. This program will redevelop well-located public housing estates in Melbourne into mostly private apartments and some community housing. Virtually all this high-value land and the public housing on it will be privatised – right where it is needed most.

This is happening at a time when the supply of public housing in Victoria has reached critically low levels. The waiting lists for housing are at a record high of about 100,000 people and growing.

Read more: The many faces of social housing – home to 1 in 10 Australians

And this is just the tip of the affordable housing problem. Tens of thousands more people are in housing stress and eligible for housing assistance.

As housing advocates have been saying for a long time, the most effective solution to homelessness and housing stress is public housing.

Read more: Shh! Don't mention the public housing shortage. But no serious action on homelessness can ignore it

Despite these trends, the twin policy failures of selling public land and disinvesting in public housing have been a feature of Victorian government for decades. The Andrews Labor government continues to ignore the importance of using strategically placed government-owned land for the public good.

This also disrespects the spirit of treaty negotiations with First Peoples now under way in Victoria.

The state government has responded to a wide range of calls to invest in social housing as part of a stimulus package. The announcement of A$500million investment in upgrading 23,000 public housing dwellings and building 168 new ones is very welcome. Direct state investment in public housing can throw the construction sector a lifeline.

But the announcement falls way short of the scale needed. Key organisations in the sector have identified the need for tens of thousands of new units.

The evidence proves that directly providing public housing is the most cost-effective and efficient way to deliver housing for low-income households. It is much cheaper than buying homes at market prices, which the New South Wales government is considering. 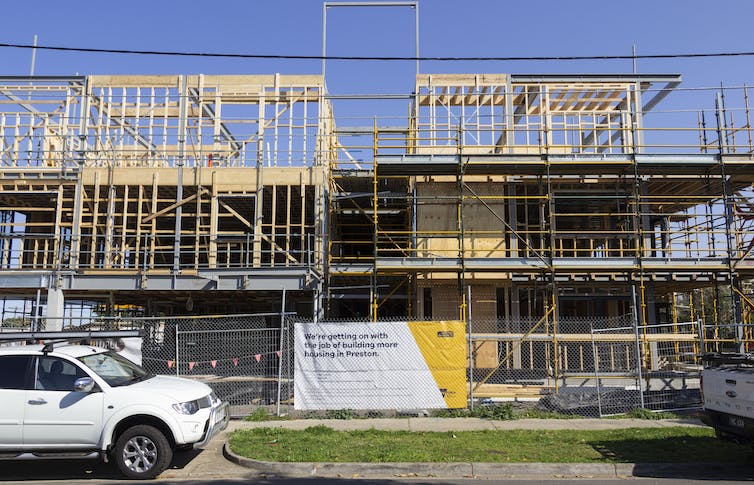 Public housing in Preston was built recently for less than A$300,000 per dwelling. Liam Davies, Author provided

Read more: Australia needs to triple its social housing by 2036. This is the best way to do it

The COVID-19 pandemic has revealed the tremendous scale of housing inequality in Victoria and across Australia. It also presents an opportunity. The Andrews government is in the unique position of being able to support the construction sector, deliver the public housing this state desperately needs and respect treaty negotiations with First Peoples in Victoria.

For modest investment, Victoria could build thousands of public housing dwellings in excellent locations to deliver the basic infrastructure of life: a place to call home. If we are serious about a construction-and-infrastructure-led recovery, now is the time to finally realise that housing is essential infrastructure.

Roland Postma contributed to this article. The authors acknowledge that the lands discussed in this article are the unceded lands of Traditional Owners. The article was written on Wurundjeri Country and we pay our respects to Woiwurrung Elders and ancestors.