A new trial has begun in Victoria this week to evaluate a potential vaccine against COVID-19.

The vaccine is called NVX-CoV2373 and is from a US biotech company, Novavax.

The trial will be carried out across Melbourne and Brisbane, and is the first human trial of a vaccine specifically for COVID-19 to take place in Australia.

This vaccine is actually based on a vaccine that was already in development for influenza. But how might it work against SARS-CoV-2, the coronavirus that causes COVID-19?

Read more: Could BCG, a 100-year-old vaccine for tuberculosis, protect against coronavirus?

What’s in the mix?

Vaccines trigger an immune response by introducing the cells of our immune system to a virus in a safe way, without any exposure to the pathogen itself.

All vaccines have to do two things. The first is make our immune cells bind to and “eat up” the vaccine. The second is to activate these immune cells so they’re prepared to fight the current and any subsequent threats from the virus in question.

We often add molecules called adjuvants to vaccines to deliver a danger signal to the immune system, activate immune cells and trigger a strong immune response.

The Novavax vaccine is what we call a “subunit” vaccine because, instead of delivering the whole virus, it delivers only part of it. The element of SARS-CoV-2 in this vaccine is the spike protein, which is found on the surface of the virus.

By targeting a particular protein, a subunit vaccine is a great way to focus the immune response.

However, protein by itself is not very good at binding to and activating the cells of our immune system. Proteins are generally soluble, which doesn’t appeal to immune cells. They like something they can chew on.

So instead of soluble protein, Novavax has assembled the SARS-CoV-2 spike protein into very small particles, called nanoparticles. To immune cells, these nanoparticles look like little viruses, so immune cells can bind to these pre-packaged chunks of protein, rapidly engulfing them and becoming activated.

The Novavax vaccine also contains an adjuvant called Matrix-M. While the nanoparticles deliver a modest danger signal, Matrix-M can be added to deliver a much stronger danger signal and really wake up the immune system.

The spike protein is formed into nanoparticles to attract immune cells, and Matrix-M is added as an adjuvant to further activate immune cells. Author provided

The Novavax vaccine for SARS-CoV-2 is based on a vaccine the company was already developing for influenza, called NanoFlu.

The NanoFlu vaccine contains similar parts – nanoparticles with the Matrix-M adjuvant. But it uses a different protein in the nanoparticle (hemagglutinin, which is on the outside of the influenza virus).

In October last year, Novavax started testing NanoFlu in a phase III clinical trial, the last level of clinical testing before a vaccine can be licensed. This trial had 2,650 volunteers and researchers were comparing whether NanoFlu performed as well as Fluzone, a standard influenza vaccine.

Read more: Where are we at with developing a vaccine for coronavirus?

An important feature of this trial is participants were over the age of 65. Older people tend to have poorer responses to vaccines, because immune cells become more difficult to activate as we age.

This trial is ongoing, with volunteers to be followed until the end of the year. However, early results suggest NanoFlu can generate significantly higher levels of antibodies than Fluzone – even given the older people in the trial.

Antibodies are small proteins made by our immune cells which bind strongly to viruses and can stop them from infecting cells in the nose and lungs. So increased antibodies with NanoFlu should result in lower rates of infection with influenza.

These results were similar to those released after the phase I trial of NanoFlu, and suggest NanoFlu would be the superior vaccine for influenza.

So the big question is – will the same strategy work for SARS-CoV-2? 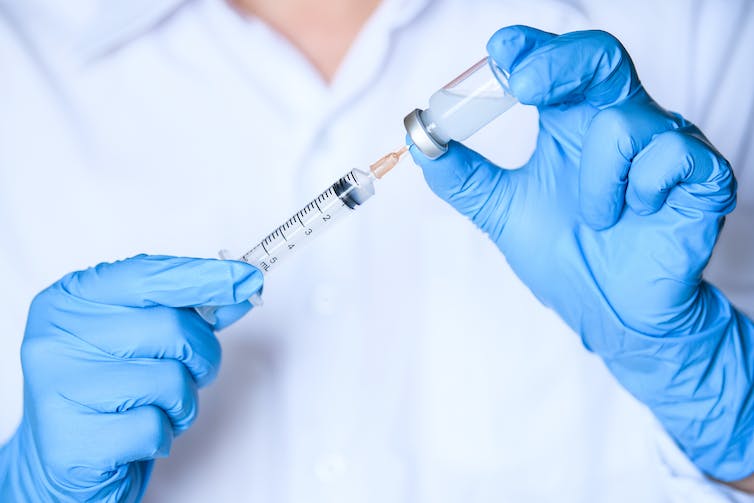 The Novavax vaccine is one of several potential COVID-19 vaccines being trialled around the world. Shutterstock

The new phase I/II trial will enrol around 131 healthy volunteers aged between 18 and 59 to assess the vaccine’s safety and measure how it affects the body’s immune response.

The trial will test two doses of protein nanoparticles – a low (5 microgram) or a high (25 microgram) dose. Both doses will be delivered with Matrix-M adjuvant but the higher dose will also be tested without Matrix-M.

All groups will receive two shots of the vaccine 21 days apart, except one group that will just get one shot.

Read more: Coronavirus anti-vaxxers aren’t a huge threat yet. How do we keep it that way?

While it’s not yet clear how the vaccine will perform for SARS-CoV-2, Novavax has reported it generated strong immune responses in animals.

And we know NanoFlu performed well and had a good safety profile for influenza. NanoFlu also seemed to work well in older adults, which would be essential for a vaccine for COVID-19.

We eagerly await the first set of results, expected in a couple of months – an impressive turnaround time for a clinical trial. If this initial study is successful, the phase II portion of the trial will begin, with more participants.

The Novavax vaccine joins at least nine other vaccine candidates for SARS-CoV-2 currently in clinical testing around the world.