The impacts of invasive mammals such as feral horses and feral cats have featured prominently in the media over the years.

But the recent discovery of the infamous “murder hornet” (or giant Asian hornet Vespa mandarinia) in the US has shone a spotlight on a similar invasive insect in Australia, the European wasp (Vespula germanica).

Invasive plants and animals can have catastrophic impacts on wildlife. And along with habitat loss and overexploitation, they are the greatest threat faced by native Australian species. 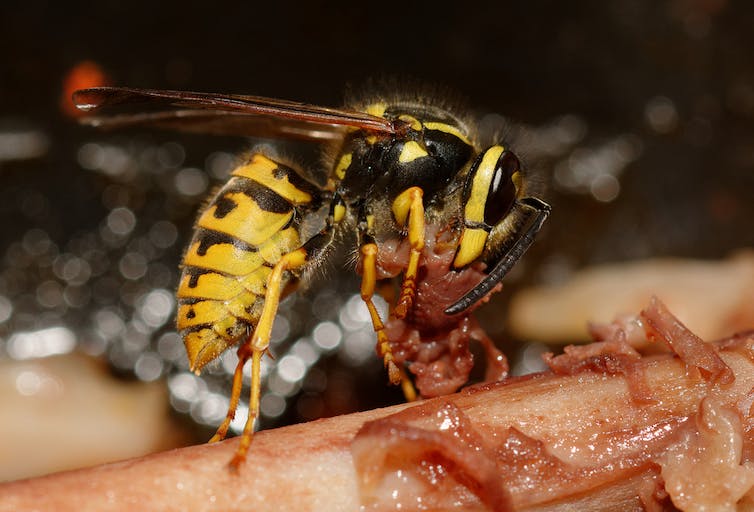 The rise of European wasps

European wasps are native to Europe, Northern Africa and parts of Asia. But hibernating queens stowed unintentionally in ships or trucks can colonise new areas, and this is how they arrived in Australia.

They were first discovered in Tasmania in 1959, and by the 1970s had reached mainland Australia. Today, European wasps are found in every state and territory, and are considered an agricultural, urban and environmental pest. The species is firmly established in the eastern parts of the country, and constant vigilance is required to keep numbers down in other areas.

European wasps have no predators (other than humans) in Australia. And they tend to forage more efficiently than their native counterparts, such as the common paper wasp Polistes humilis.

Although they are typically most active in late summer and autumn, Australia’s warmer climate means not all European wasp queens hibernate over winter as they do in Europe. This allows some wasp colonies to build “super nests” of up to 100,000 individuals.

European wasps are commonly encountered in urban areas and, unlike bees, can sting multiple times. They also release a pheromone when threatened that quickly attracts more wasps. So if you bother a nest, you may have to contend with the whole hive.

Our research looks into the role of European wasps as scavengers.

In Australia, animal carcasses aren’t in short supply. Millions are produced each year due to culling, vehicle collision and drought. The recent bushfires also added to this.

Most carcasses are left to rot and provide perfect “free feed” stations for wasp colonies foraging for protein. For our study, we monitored 20 kangaroo carcasses at Kosciuszko National Park in New South Wales.

Wasps congregated in large numbers around each, and ruthlessly attacked blowflies that attempted to approach. We could sit next to a carcass and watch fly after fly tackled to the ground by wasps. Many flies showed signs of mutilation. To our surprise, some were even missing their heads.

This unlucky blowfly was decapitated by a European wasp. Emma Spencer, author provided

In an effort to protect “their” carcass, the European wasps were decapitating the flies. This may have simply been defensive behaviour, but they could have also been taking bits of flies back to their nest for larvae to feed on.

We also observed the wasps bothering animals much larger than them, and our camera trap images showed dingoes snapping at wasps circling carcasses. Many of these animals retreated without feeding on the resource, presumably because the wasps were stinging them. 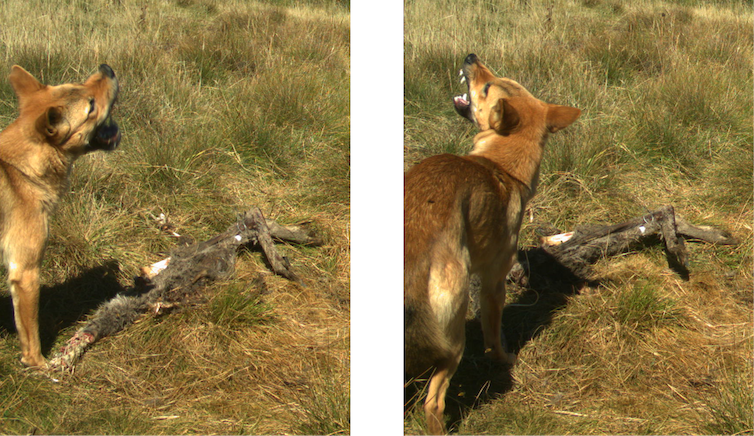 We can’t ignore the flow on effects

Our recent study is just the start of our investigations into European wasp impacts in Kosciuszko National Park. But it has raised important points about the fate of carcasses dominated by wasps.

For one, it seems the wasps are preventing blowflies and dingoes from doing their job of “cleaning up” carcasses in the landscape. Also, flies are major pollinators, and decapitation isn’t helpful for pollen transfer.

A European wasp attacks a blowfly.

Moreover, if European wasp numbers are supported by prevalent carcass resources (including those resulting from culling) this may suggest a need to cull pest species when the wasps are not active, such as during the coldest times of the year.

Are wasps and ‘murder hornets’ a danger to us?

Like the European wasp, the “murder hornet” also threatens insect pollinators. The hornets have raised alarms in the US because they decimate honeybee populations, and have a nasty sting.

Similarly in Australia, there has been a focus on the threat European wasps pose to humans. But as is the case in the US, this focus is largely misguided.

Read more: What are Asian giant hornets, and are they really dangerous? 5 questions answered

While both insects have painful stings that can result in severe allergic reactions, fatalities are rare. And we would do well to redirect our concerns towards the impacts such species have on our ecosystems.