CC BY-ND Climate Explained is a collaboration between The Conversation, Stuff and the New Zealand Science Media Centre to answer your questions about climate change. If you have a question you’d like an expert to answer, please send it to climate.change@stuff.co.nz If we stopped oil, gas and coal extraction immediately - what would happen? What would we need to change about the way our economies and societies work in order to adjust to that resource no longer being available? Do alternatives already exist that mean it could be business as usual if we (governments and individuals) make changes, or would it mean a major adjustment to the way we live our lives? It is not feasible to immediately stop extracting and using fossil fuels. The global economy, human health and livelihoods currently depend heavily on oil, coal and gas. But over time, we need to displace fossil fuels with low-carbon renewable energy sources. The first priority should be on switching to renewable energy, not just for electricity but also for heating, cooling and transport fuels. It will be much harder to substitute fossils fuels used for chemical processing, such as the manufacture of plastics or fertiliser, but it is technically possible with biomass (organic material from plants and animals). After all, the hydrocarbons in coal, oil and gas were originally derived from biomass millions of years ago. The aim of governments, local and national, should be to encourage reduced use of fossil fuels by supporting renewable energy systems. Read more: Climate crisis: six steps to making fossil fuels history Increasing contribution from renewables One issue is that global subsidies for fossil fuel extraction remain large, at around US$4.7 trillion per year according to the International Monetary Fund. In a recent global energy review, the International Energy Agency described a significant drop in energy demand from fossil fuels as a result of the COVID-19 pandemic. Demand is likely to rise again, but in the meantime, the use of renewable electricity continues to increase and now has a 25% share of global electricity. Countries with good renewable resources can reach a significantly higher share. New Zealand, for example, now produces around 85% of its total electricity from renewable sources (including hydro, wind, solar and geothermal) without government intervention. But overall, renewable energy contributes only 40% of all energy demands in New Zealand, and far less globally. There are many examples of how renewable energy can meet intensive industry demands, in New Zealand and elsewhere. New Zealand’s aluminium smelter uses electricity generated by the country’s largest hydro power station built underground at Lake Manapōuri. A steel mill in Sweden uses “green hydrogen”, produced by using renewable electricity to split water into hydrogen and oxygen. 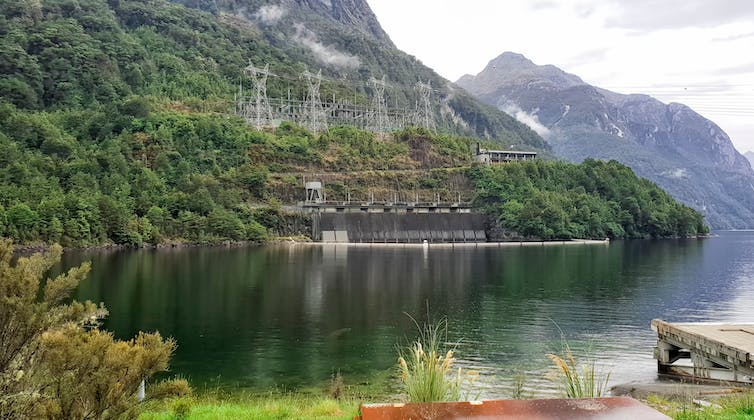 The Manapōuri hydro power station supplies electricity to New Zealand’s aluminium smelter. Uwe Aranas/Shutterstock Green hydrogen can also be used to displace natural gas for heating and cooking as well as for fuelling trucks, cars, boats and planes. Read more: Immediate phase out of fossil fuels could keep warming below 1.5°C The costs and benefits of change There are many alternatives to fossil fuels with far lower carbon footprints. This includes electricity generated by nuclear power plants. But the problem is fossil fuels remain relatively cheap, because the cost of their pollution isn’t usually factored in, and energy dense (there is more energy contained in a lump of coal than a piece of wood of a similar size). Displacement is not easy and will take time to allow those working in the fossil fuel industry to go through a “just transition” to work in other sectors. Government intervention is often required for low-carbon options to increase their share in meeting total energy demands. But changing people’s behaviour around energy use is more challenging than deploying new low-carbon technologies to provide the same energy services. Read more: Why our response to climate change needs to be a just and careful revolution that limits pushback We should not forget the additional benefits that come with a shift to low-carbon energy generation. More walking and cycling improves health, electric vehicles reduce local air pollution (compared with petrol and diesel vehicles) and using public transport and carrying more freight by rail can reduce traffic congestion. Other simple energy-saving measures – switching off lights, not wasting food – can all save money while lowering someone’s carbon footprint. We have become a wasteful society, with consequences for the environment. Perhaps now is the time to make major adjustments to how we live before climate change impacts do it for us.