Australia is routinely compared with other rich, developed nations. Its economy, schooling, health care, infrastructure and social values are regularly put up against those of Western Europe and North America, allowing intelligent comparisons to be drawn. Like is compared with like.

But when it comes to the ethnic composition of its population, these comparisons are distorted by history. The unspoken twist is that, until two generations ago, Australia practised a policy of racial exclusion.

The country’s nation-builders placed a straitjacket on the ethnic character of Australia’s future, reflecting the values of racial hierarchy of the post-Victorian age. This policy persisted into the 1970s and meant Australia remained, for a long time, in Asia but certainly not of Asia.

As a new publication, Re-Imagining Australia: Migration, Culture, Diversity from the UWA Public Policy Institute, argues, it is possible to see the results of this social experiment in 2020.

Very few older Australians beyond their 50s are of non-European descent, and this demographic feature is now hard-baked into politics and policy debates.

White Australians over 50 have also grown up as the first generation that has had to share legal rights and citizenship with Indigenous Australians. They have done so starting from a low base, but progress has been glacial.

Read more: Explainer: what is systemic racism and institutional racism?

This is because the former are generally older, better off and homeowners, so they are more reliant on (and exposed to changes in) these services and policies.

Equally, younger Australians are considerably more likely to be of Asian, African, Middle Eastern or Pacific Islander heritage, and are disproportionately affected by policy proposals in tertiary education, housing affordability and visa restrictions.

By not taking these structural variances into account, there can be major gaps in policy-making.

For instance, during the COVID-19 crisis, the government’s JobKeeper wage-subsidy program specifically excluded temporary skilled visa holders – substantial numbers of whom are from Asia (India, in particular). The uneven effects of the policy are not hard to see.

Dealing with the past

For much of the post-war period, Australia’s leaders anguished over the need to populate or perish. But it remained a white past and a white future. Australia’s major institutions, including politics, higher education, media, the arts and the public service, still fail to reflect the massive demographic shift in recent years.

As Paul Maginn, a senior lecturer in urban planning at UWA, observes in our report:

Not all migrant/minority communities enjoy the same level of respect, equality, freedom and opportunity as the wider white Australian population. If this were the case, then a truly successful multicultural nation would look very different.

The hangover is reflected in many things, not least the majority white population’s sense of attachment to national cultural norms, symbols and practices.

As Farida Fozdar, associate sociology professor at UWA and another author of our report, argues, Australia’s sense of national community has been founded on a solidarity that shuns diversity. To be socially cohesive is to imply a degree of homogeneity, and that constrains the task of re-imagining Australia.

Read more: Yes, it is time to rethink our immigration intake – to put more focus on families

Dealing with the past often sparks controversy, from the removal of statues such as Cecil Rhodes in Oxford and Robert E. Lee in Virginia to the calls for state reparations for historic crimes, such as the slave trade.

It is nothing less than embarrassing that in modern-day Australia, almost all senior roles in government or business are held by middle-aged white men.

One way of viewing this is they have grown up and prospered at a time when Australia was ethnically homogeneous – they grew to trust and work collaboratively with those “just like us”. Rather like fish swimming in water, it is hard to notice that which is ubiquitous.

A less sympathetic view is they have never had to compete in a wider pool, and continue to behave rationally to restrict competition in order to maintain their privilege. Many mediocre, white men have been excused from competing as a result.

Gross disparities in the complexion of those at the top matter for two reasons. One is the manifest unfairness in opportunities for ethnic minorities in education, employment, health care and housing.

The other reason is the creation of a reputational stain on those organisations that are slow to reform. Second-generation migrants may begin to question the “fair-go” mantra because they sense they are being overlooked, their patience stretched by standing politely behind those they can comfortably outperform.

The picture is stark in Australia’s politics. As Juliet Pietsch, political science professor at Griffith University, notes in our report, only nine of 227 (or 4%) of federal MPs have non-European heritage. 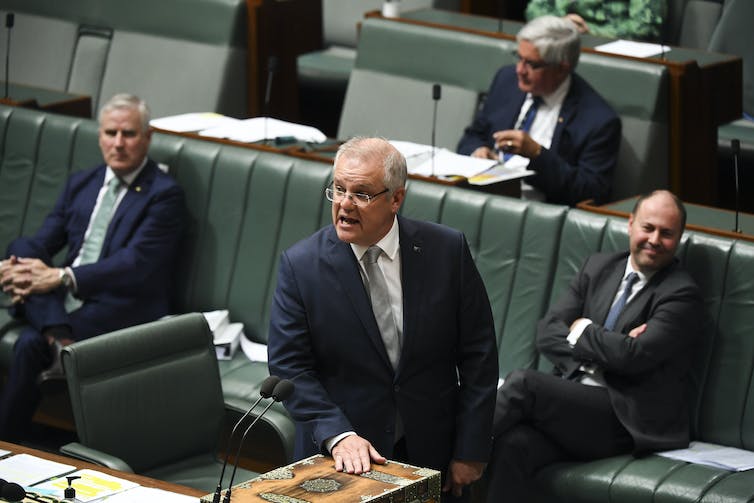 Under-representation extends to senior leadership levels. Not a single Australian federal minister is from an Asian-Australian background. The only bright spot to this lack of Asian-Australians in senior roles is Penny Wong, the shadow foreign minister.

As UWA political science professor Ben Reilly writes, Australia lags well behind comparable countries, such as Canada and the UK, on this measure.

In the UK, four Asians have senior Cabinet roles and a tenth of the lower house is made up of ethnic minorities, while in Canada, over 15% of MPs and six out of 37 Cabinet members are minorities.

Read more: Australia should look overseas for ideas to increase its number of women MPs

How should governments address these issues? The conventional view has erred toward caution, noting the majority white electorate is easily antagonised by policies and gestures that appear to favour ethnic minorities in areas such as education, jobs and housing.

This outlook has dominated Australian politics and underscores the recent warning from Sam Roggeveen of the Lowy Institute about the potential for immigration to polarise Australian public opinion and poison the country’s politics.

But on the other side, Australia’s reputation for fairness will be eroded in the eyes of its future generations. Young, educated, liberal, urban, white Australians may also object to discriminatory practices going unchecked and call for tougher actions by government.

The true extent of Australia’s “fair-go” mantra will not depend so much on the transmission of older values and symbols to newer, more diverse Australians.

Rather, it depends fundamentally on their experiences in education and employment being free of white privilege. This will determine whether they truly believe there is a level playing field.