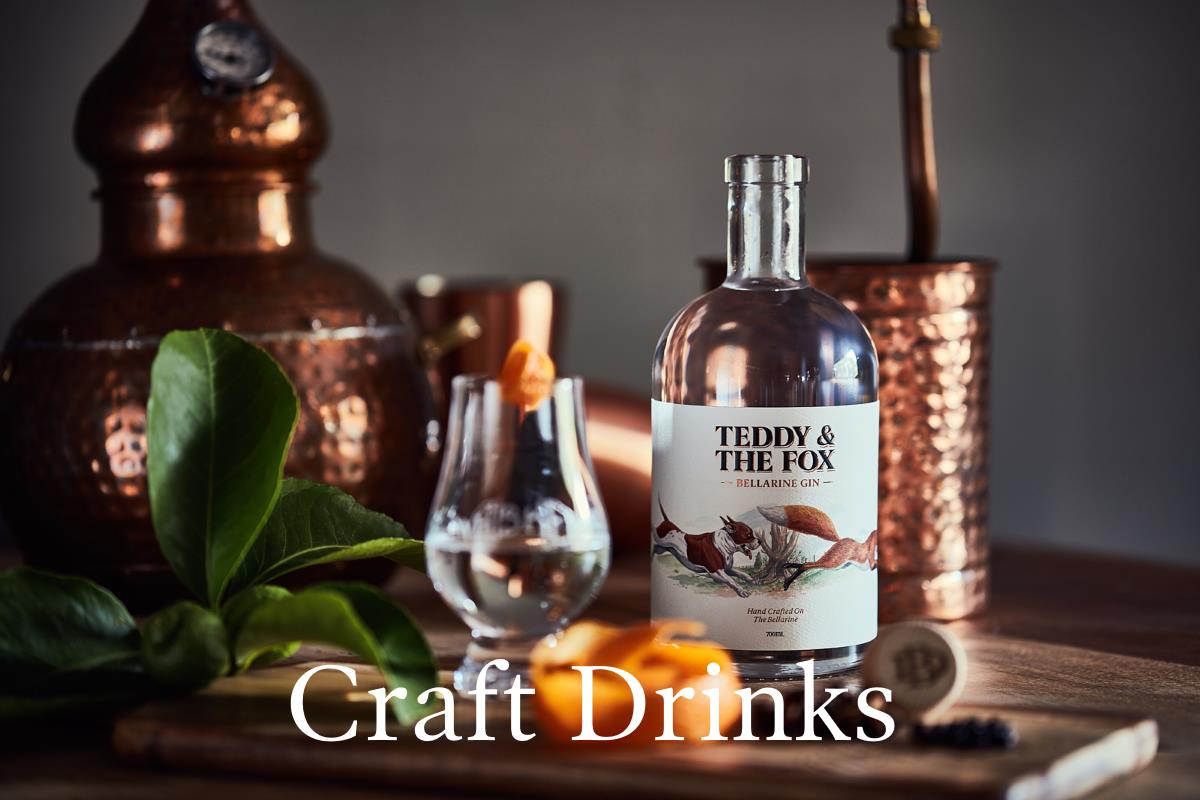 There's plenty of places (and excuses) to stop for a tasting paddle, a cellar door tour, or a long, beer-matched lunch. Distilleries across Victoria also open their doors for tastings of small batch spirits such as artisan gin and whiskey.

There are currently 168 craft breweries in Victoria, more than any other state or territory in Australia.

33 craft distilleries can be found in Victoria including 7 in Melbourne.

In Port Melbourne, visitors can do a walking tour which includes Starward Whisky and Melbourne Moonshine as well as Colonial Brewing and Westside Ale Works.

Little Lon - Little Lonsdale, this once 'notorious' north-east corner of Melbourne, was a sight to behold in the 1850s. Its colourful past -specifically, a deep shade of harlot red- made it a magnet for the debauched, where wanton wenches and liquored-up larrikins lurched down its lamp-lit lanes. Fast forward 141 years and introducing Little Lon Distilling Co. A gintrified establishment commemorating the rich history of Little Lon with a range of characterful, small batch gins that raise a tipple to the delightful deviates that once trod these lurid laneways.

Starwood Distillery was founded in 2007 by Melbourne born and raised David Vitale who wanted to create a whiskey that Australia can take to the world with pride, and one that reflects his home city 'from its culture to its famed 'four seasons in a day' temperature swings.' Starward Whiskey is developed using Australian barley and barrels but integrating maturation techniques from around the world, that along with the Victorian climate and maturation process (in Australian wine barrels), creates a distinctly Melbourne flavour. The New World Whiskey Distillery also conducts a range of Whiskey MasterClasses, dinners and open days at their workshop in Port Melbourne each month.

The Craft & Co takes up a prime position on bustling Smith Street, Collingwood, in Melbourne's inner north. This one stop shop is home to a brewery, distillery and winery as well as cellar door, eatery, cafe, bar, cheese and charcuterie. Spirits include a Collingwood Dry gin, a bloody Mary Vodka, and a Three Distillers One Gin collaboration with The West Winds and Artemis and Craft & Co. On site classes include the option for visitors to make their own cheese, pasta, beer and gin.

Yarra Valley
Located in the hip Yarra Valley gateway of Healesville, Four Pillars Gin's meteoric rise to global recognition now sees the brand available in most retail stores bars and restaurants around Australia and increasingly internationally too. Four Pillars produces small-batch gin with interesting blends such as the popular Bloody Shiraz and the seasonal Christmas Pudding, the gin is renowned for using native Australian botanicals alongside international counterparts. Each bottle is individually numbered and hand labelled. The stylish distillery door is available for tastings and masterclasses and special events.

Also located in Healesville Alchemy Distillers has recently popped up on the main street adding yet another feather in the cap of happening Yarra Valley town. Founders Evan Kipping and Jannick Zester are using a hybrid pot still with a 100-litre capacity to create their Mooshine (a corn based Bourbon style whisky), Alchemy Gin and Quinoa Vodka and more experimental small-batch spirits. The venue offers a rustic relaxed vibe in which to sample the many cocktails on offer, a new menu is coming and there is also accommodation in the form of an adjoining apartment. The business has taken over a century-old bakery.

Geelong & The Bellarine
The Whiskery is the cellar door/tasting room for Bellarine Distillery. Produced onsite, visitors can sample whiskies and gins, including the original Teddy and the Fox gin, in the tasting room. Set on a former Cobb & Co horse watering hole, guests can devour small Italian style pizzas and local produce grazing plates in front of the beautiful fireplace or outside.

Goldfields
In the historic city of Ballarat, Kilderkin Distillery (named after a type of barrel) has been around since 2016 and has a focus is on producing premium quality whiskey and gin. Signature gins are a London Dry Gin and an Australian Gin. Both are infused with juniper, coriander and a range of carefully selected botanicals. There is also a series of special edition spirits, like the Cherry Gin. The first whiskies will be available from 2019. At the cellar door, which is shared with Red Duck Brewery, visitors can choose from gin tasting flights, gin and mixer drinks, beer tasting paddles, and the full range of Red Duck beers.

High Country
The multi-million dollar Nagambie Brewery and Distillery opened in March on the edge of Lake Nagambie, 90 minutes from Melbourne. The former police camp has been transformed by Melbourne architecture firm Six Degrees into a modern brewery and distillery featuring unspoiled water views, sleek architecture, craft beverage and wood-fired eats. A concrete, steel and brass bar and paneled doors open to an expansive deck space with its sweeping lakeside views. Inside, the space is flanked by two closed combustion fireplaces, offering a homely feel that will be warmly welcomed in the cooler months.

Husband and wife chefs from the North East, Hamish and Rachel, have turned their attention to distilling at Reed & Co Distillery in Bright. Drawing inspiration from their natural surroundings that reflects the landscape of the Alpine Region, the first limited release gin from the pair is called 'Remedy Gin' and is an Australian Dry Gin with traditional roots. A spicy gin up front with juniper and mountain pepper berry. While the middle palate shows citrus notes from the lemon myrtle and finger lime. Shiso, eucalyptus, apple and tea. The distillery itself is situated in the centre of Bright complete with a bar and a coffee roastery by Sixpence Coffee.

Mornington Peninsula
Founded in 2009, Bass and Flinders Distillery is located on the Mornington Peninsula, just over an hours' drive from Melbourne's city centre. They produce a range spirits including Limóncello, grape vodka, brandy and grappa but are widely known for their gin. The gin is produced using alcohol from grapes instead of grains and include a wide range of options, whether customers like it Wild and Spicy or Smooth and Soft. A visit to the refurbished cellar door combines modern architectural style with a notable barrel room, and the distillery conducts regular Gin Experience events where visitors can make their own gins using a wide range of botanicals.

St Andrews Beach Brewery is situated on a 92-acre property in Fingal on the Mornington Peninsula, which was once a world class horse training facility. Diners can enjoy a variety of freshly brewed craft beers and a bite to eat in the former racing stables of Group One winning horses. Standout beers include the American IPA and Pale Ale.

Great Ocean Road
The Timboon Railway Shed Distillery is located just 15 minutes from The Great Ocean Road and a stone's throw from the iconic 12 Apostles. It has operated since the 1890s, originally an illicit operation delivering 100 gallons every week to thirsty locals. The 600 litre copper pot still bubbles away in the corner but nowadays it's all legit and visitors are welcome to sample the whisky, meet the distiller and learn about Timboon's history. The distillery is also part of the 12 Apostles Gourmet Trail, with local produce including smoked eel, honey, ice cream, strawberries, ales, wines, cheese and chocolates on the menu.

The team at Forrest Brewery brews award-winning beer, prepares fabulous food and offers a top location in which to enjoy an ale after a mountain bike ride in the nearby Otway Forest. Set in stunning natural surrounds, it is a relaxed and funky place to stop en route to or from the Great Ocean Road.

Gippsland
Just 90 minutes' drive from Melbourne, the old bank and former butchery in the South Gippsland town of Loch have been transformed into the Loch Brewery & Distillery by partners Craig Johnson and Melinda Davies. Their first focus was whisky but they are now also creating a local gin and vodka, storing all the botanicals in what was once the bank's vault. Craig and Melinda also brew their own ales – (recently released a smoked garlic ale to align with the regional garlic festival). All spirits and beers are available at their cellar door for thirsty travellers.

Daylesford Macedon Ranges
Herbal Lore specialises in healing liqueur and the combination of ancient tradition with the mysterious healing power of herbs. Their herbal liqueurs include remedies for anything from strength and power to rejuvenating and calming. In recent years, founder Robert McLean has branched out into gin and whisky. The cellar door is located in the old Daylesford Butter Factory, and visitors can also taste the liqueur chocolates, liqueur fruits and specialty ports and liqueurs while enjoying a tasting platter.

Extending from the river to the mountains, Victoria's High Country Brewery Trail is a 150 kilometre scenic drive to some truly lip-smacking hand-crafted beers. Taking in the towns of Taminick, Beechworth, Bright and Mount Beauty, trailers can get up close as the beers are brewed, learn the techniques and taste the difference between craft beer and your average, garden variety.

The history of beer in the Yarra Valley goes back to the early 1800s when hops was a major farming activity in the region, the area is also recognised as one of Victoria's oldest cider regions. Fast forward to today and craft brewers in the area are working hard to ensure that beer and cider remain an important part of the Yarra Valley's gastronomic offering. Follow the Cider n Ale Trail to discover the best beer and cider in the area.

Industry statistics
For access to the latest statistics on domestic and international visitation to Victoria, including country breakdowns, please visit http://corporate.visitvictoria.com/resources/victorias-visitor-economy