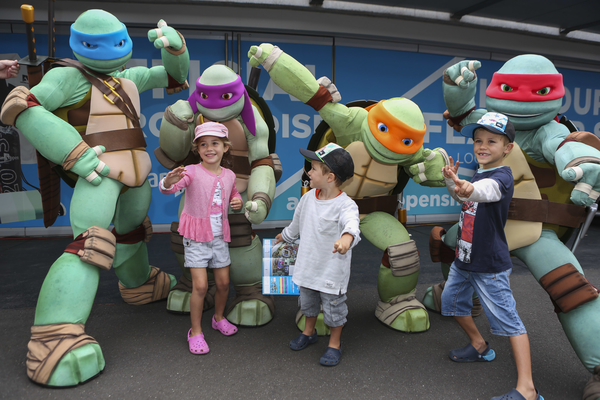 School's out, heralding the chance for kids to let their hair down. But that doesn't mean that parents need to be pulling their hair out, trying to think of ways to entertain their little ones. There are loads of activities on in Melbourne throughout the holidays to keep families occupied all summer long.

Australian Open
For two weeks in January, Melbourne Park is the home of family fun, when it hosts the Grand Slam of the Pan-Pacific, the Australian Open (18-31 January 2016). Along with world class tennis, there is a range of activities for budding tennis stars to enjoy. The fun continues at Birrarung Marr where the all-new, free and family-friendly Australian Open Festival will host activities and live entertainment. Open daily throughout the Open, the Festival will showcase some of Melbourne's famous world-class dining and food vendors, just a short walk from Melbourne Park itself. The Festival will feature three key areas, including Kids World with Nickelodeon's giant inflatable playground, Nickelodeon characters, the famous Nickelodeon Slime Lab, a Woolworths Kids Zone with fresh fruit frozen yoghurt and fun ball-kid challenges and free tennis on the ANZ Tennis Hot Shots mini-courts.

Arts Centre Melbourne
Arts Centre Melbourne is inviting movers and shakers of all ages and dance abilities to take a spin on its pop-up Dance Floor (11-23 December 2015), where a sound and light spectacular is triggered by leaping, twirling and tiptoeing. The Australian Ballet's production of The Sleeping Beauty: Storytime Ballet (16-20 December 2015) will provide plenty of dance-piration. Other family friendly productions include: The 3 Little Pigs (2-17 January 2016), direct from London's West End, which tells the classic fairytale with a musical twist; Noodlenut (19 January 2016), comedy master Frank Woodley's show for children and; The Illusionists 1903 a magic extravaganza full of tricks that will leave the whole family in awe. Public art and interactive experience, Tangle (20-24 January 2016) invites kids to take a giant ball of elastic and weave around golden poles, creating and contributing to a dense, multi-coloured landscape to play, explore and bounce in. 100 St Kilda Road, Melbourne, 1300 182 183

NGV
As part of the blockbuster exhibition, Andy Warhol | Ai Weiwei, NGV Kids presents Studio Cats (11 December 2015 – 24 April 2016), a large-scale installation especially for children that draws upon creative connections between the two artists and their mutual love of cats. Over at Federation Square, The Ian Potter Centre: NGV Australia presents Our Land is Alive Hermannsburg Potters for Kids (September 2015 – April 2016) with twenty pots depicting some of the AFL's best and finest Indigenous players from all eighteen teams. 180 St Kilda Road, Melbourne, +61 3 8620 2222

ACMI
The Australian Centre of the Moving Image (ACMI) will roll out a Summer in Motion program featuring movies, workshops and free stuff for kids. Highlight films include Asterix: The Mansion of the Gods (23 December 2015 - 29 January 2016) and Monkey Kingdom (21 December 2015 - 31 January 2016). Workshops include Make a Movie, (6-8 and 11-13 January 2016) a three day hands on creative and technical filmaking workshop and Claymation for Kids (15 January 2016), where kids can sculpt their own characters from clay. Federation Square, Flinders Street, Melbourne, +61 3 8663 2200

Luna Park
Melbourne's much-loved theme park is gearing up for its biggest summer ever with four new rides and something to suit everyone's thrill threshold. Cars for Kids offers smaller kids the chance to practice their driving skills on mini dodgem cars. Body Rock is a high speed thrill ride, lifting adventure seekers up in the air and from side to side and all around. Jungle Twist is a family friendly spinning coaster and Hurricane sends carriages plummeting upward and downward as the entire ride rotates in a fast fury of excitement. LEGO workshops will also take place throughout the holidays. 18 Lower Esplanade, St Kilda, +61 3 9525 5033

Melbourne Zoo
At Melbourne Zoo, kids have the chance to become a Seal Life-Saver (19 December 2015 – 24 March 2016) as the Carousel Park transforms into a pop-up beach. At the Wild Sea, kids can meet seals, pelicans and penguins and find out how to help save these marine wildlife. Littlies can enjoy beach-themed activities in Keeper Kids from 12pm or the seal show at 11.30am every day. At dusk every Friday and Saturday, Zoo Twilights (29 January – 12 March 2016) welcomes a selection of local and international artists to the stage. Acts include Birds of Tokyo, José González, John Butler Trio and Belinda Carlisle. Entry for kids under 16 is free. Elliott Ave, Parkville, +61 39285 9300

Royal Botanic Gardens
The Royal Botanic Gardens provide the perfect setting for a picnic all year round, and in summer the Gardens offer school holiday fun for the whole family. The Australian Shakespear Company presents Tinkerbell and the Dream Fairies (6 – 23 January 2016), an interactive adventure where dressing up as an fairy or elf is positively encouraged. At the sun sets, the Moonlight Cinema (3 December 2015 – 27 March 2016) gets under way and families and older children can roll out the picnic rug while waiting for their favourite film to roll against the city skyline. Birdwood Avenue, South Yarra, +61 3 9252 2300

Melbourne Museum
A fun filled and informative night-time tour of the Wild and Forest galleries, Night Bird Watch (26 December 2015 – 26 January 2016) will enable kids to discover owls and nightjars of of Australasia, North America and Eurasia up close. During the day, the Museum's activity rooms will become a nocturnal soundscape Night Space (26 December 2015 – 26 January 2016) featuring the the sights and sounds of creatures that are most active at night. Next door IMAX will be showing Under the Sea a child-friendly 45 minute documentary. Older kids will enjoy Star Wars in 3-D, and to accompany the film there will be loads of Star Wars droids and a Star Wars staircase, perfect for instagrammable pics. 11 Nicholson Street, Carlton, +61 3 8341 7777

Science Works
Science Works will host a 20-minute show, Blown Away (1 - 26 January 2016) every day at midday throughout January. Demonstrations will show kids the difference between high and low air pressure and how it moves around. Ages 8 and up will also enjoy the chance to explore the world with just a smartphone in a cardboard box with Virtually Real! (1 – 26 January 2016). The simple stereoscopic mask combines two images into one for a 3-D effect, while a motion sensor in the device detects and adjusts the image according head movements. 2 Booker Street, Spotswood, +61 3 9392 4800

2016 Formula 1® Australian Grand Prix Disney preview
Disney will keep both kids and parents entertained during the 2016 Formula 1® Australian Grand Prix (17-20 March, 2016), and as a sneak preview, fans can catch a glimpse of their favourite Disney characters and activities this January. Disney will be on show at F1 World at City Square from 12-22 January, and at F1 @ Federation Square from 26-28 February. In another coup for families and just in time for Christmas, the Australian Grand Prix Corporation is offering '2 for 1' tickets for General Admission fans until 22 December 2015. Crn Swanston Street and Collins Street

Phillip Island Nature Parks
Out of town, Phillip Island Nature Parks has just launched two new experiences. Antarctic Journey, at the Nobbies Centre, takes visitors on a virtual journey into the world of the Southern Ocean and Antarctica, through interactive and immersive experiences over three levels. At the Penguin Parade, an upgraded Penguins Plus viewing area enables visitors to see eye to eye with penguins as they waddle up the shore to their burrows.