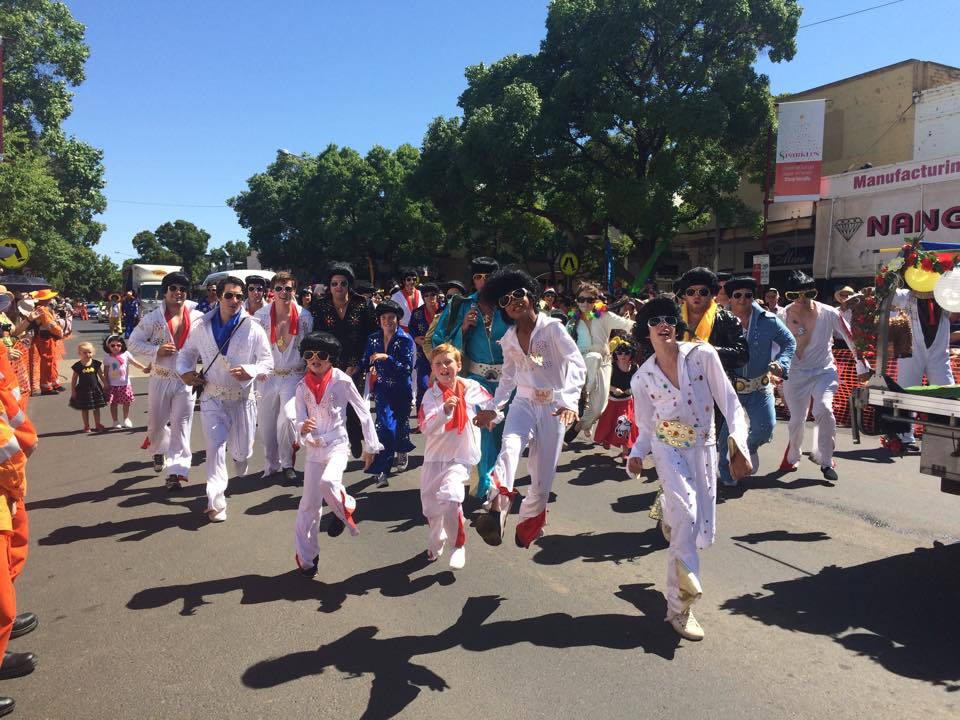 Well’a, bless my soul, let’s get ready to rock’n’roll — Parkes Elvis™ Festival is back! From Wednesday 9 January — Sunday 13 January 2019, over 26,000 people will shake, rattle and roll into Parkes, NSW for the biggest tribute to The KingTM in the Southern Hemisphere.

The 2019 Parkes Elvis Festival program is filled to the brim with more than 150 unique Elvis-themed events that are sure to get you all shook up. The program includes much loved events; the headline Feature Concert Series, Northparkes Mines Street Parade, Renewal of Vows Ceremony, free ARTC Cooke Park Main Stage Entertainment, Elvis Gospel Service, as well as a host of new programming designed to get revellers on their feet and shaking their hips.

Starting out as a small get together between like-minded Elvis fans in 1993, the Festival has grown today into an international renowned phenomenon, endorsed by the estate of Elvis Presley, Elvis Presley Enterprises Inc.

This year’s Festival theme is All Shook Up, celebrating Elvis' iconic song and all things '50s. Released in March 1957, All Shook Up quickly topped several American charts and became certified double-platinum and an instant jukebox hit. Dust off the pompadour wigs, shine those blue suede shoes, and get ready to rock and roll at this celebration of all things '50s!

Festival Director, Cathy Treasure said, “The Festival is back for another year of fun as we celebrate Elvis’ iconic single, All Shook Up, and all things ‘50s. All the Festival favourites are back, along with some great new highlights, family focused activities, special performances from world-renowned Elvis tribute artists and more!”

Deputy Premier and Minister for Regional NSW John Barilaro was in Parkes today to help launch the 2019 program and said the Festival isn’t just an event for Parkes, it’s an event that has grown significantly, grabbing the attention of visitors from across Australia and the globe.

“As a major highlight on the NSW Events Calendar, the NSW Government is proud to be continuing our support for the Festival for a further three years through Destination NSW, the State’s tourism and major events agency. From 2019 until 2021 the Parkes Elvis Festival is expected to inject more than $30 million into local hotels, restaurants, shops and tourist attractions, helping to turbocharge the local economy and create more jobs.”

Tickets are on sale now to all events, including the 2019 Feature Concert Series, featuring U.S. Elvis tribute artist, Ted Torres Martin. Across four high-energy concerts at Parkes Leagues Club, Ted will recreate the performances that cemented Elvis as the King of Rock ‘n’ Roll, all the while being backed by a dynamic, eight-piece band. In addition, Ted will appear at the Parkes Elvis Festival Street Parade, Gospel Service and Renewal of Vows Ceremony.

Performances in the Feature Concert Series include, The Hill Billy Cat – The Making of a King, featuring hits of the ‘50; If I Can Dream – The Greatest Comeback of All Time, with hits from the 1960’s; My Way – A Journey Through the 70s; and All Shook Up – The King at His Best, showcasing Elvis’ greatest hits.

New to the program are a range of exciting workshops for young and old. Don your favourite Hawaiian shirt and strum your way through classics like Can’t Help Falling in Love at the Ukulele Workshops, held on Thursday and Friday. Mini-Elvii can have all sorts of fun at the Kids Talent Workshops on Friday, hosted by the original yellow Wiggle and all-around Elvis fanatic, Greg Page.

The beloved Mark Andrew, and special guests, returns to Parkes Elvis Festival with his Legends’ Show, on Friday. On Saturday is the Tribute to Phil Emmanuel, who passed in mid-2018, but whose rich history in Parkes and overall music contributions had him honoured on the Elvis Wall of Fame at the 2018 Festival.

Kicking off the Festival is the all new All Shook Up Special — a tribute to the Million Dollar Quartet, featuring Lance Lipinsky as Jerry Lee Lewis, Anthony Petrucci as Elvis Presley, Daniel Thompson as Johnny Cash and Brad Bergen as Carl Perkins.

The regional train service, the Blue Suede Express, will return with the Elvis Express this year, featuring the luxury heritage passenger train, the Blue Zephyr and plenty of onboard entertainment. The 2019 Miss Priscilla Dinner on Thursday will feature a special performance by Elvis tribute artist, Jack Gatto, and will see the crowning of the 2019 Miss Priscilla.

Tickets to all Parkes Elvis Festival shows, across the many venues in the city, will be available to purchase online, making booking your entire five day Elvis extravaganza a breeze.

For all programming and ticketing information, visit www.parkeselvisfestival.com.au

Parkes Elvis Festival is held annually in the second week of January in Parkes, New South Wales, coinciding with the birthday of Elvis Presley. Parkes has a population of 12,000 and is located 365 kilometres west of Sydney. In January 2018 over 26,500 visitors attended the Festival, more than doubling Parkes’ population.

The Festival began in January 1993 as a small birthday party for the local newspaper editor. It was so much fun they decided to do it again - and again! Over the following 10 years additional events were added and it became a two-day Festival. With the vision and effort of the voluntary organising committee as well as the support of Parkes Shire Council, the Festival exploded in popularity and word quickly spread across Australia of the fun and unique event in regional NSW.

Following its tremendous success, in 2014 the Festival transitioned management to Parkes Shire Council under a Section 355 Festival Committee. The Festival now regularly attracts visitors from all around Australia and stages more than 150 events annually. In January 2015, Parkes Elvis Festival was officially endorsed by Elvis Presley Enterprises, Inc., the trustees of the estate of Elvis Presley. Official endorsement elevates Parkes Elvis Festival to the ranks of premiere Elvis tribute festivals in the world.

Parkes Elvis Festival is supported by the NSW Government via its tourism and major events agency, Destination NSW.