Running through Hydra, the new play by Australian playwright Sue Smith, is the myth of Icarus, the boy who flew so high that his wings melted and he crashed to his death in the sea near the Greek island of Samos.

It is an easy myth to misunderstand. Moralists think it is a story that reinforces the importance of listening to your parents and sticking to the safe middle path – not flying “too close to the sun”. In contrast, artists have always recognised that the appeal of the myth lies in its promise of the freedom to soar with the birds.

The conclusion may be disastrous, but the joy is in that fabulous voyage that precedes it. Any price is worth paying to touch the sky. We don’t need to lament Icarus. The tragic figure is his father Daedalus, too scared to follow his son in his magnificent, glorious, fatal flight.

Hydra tells the story of the Australian husband-and-wife writers George Johnston (Bryan Probets) and Charmian Clift (Anna McGahan), two Icarus-like characters, and the ten years they spent in Greece, primarily on the island of Hydra. Beginning in the mid-1950s, it was a wild time of booze, song, and love-making. Hydra became a hangout for artists, writers, and musicians. A refuge for misfits hiding from the world. 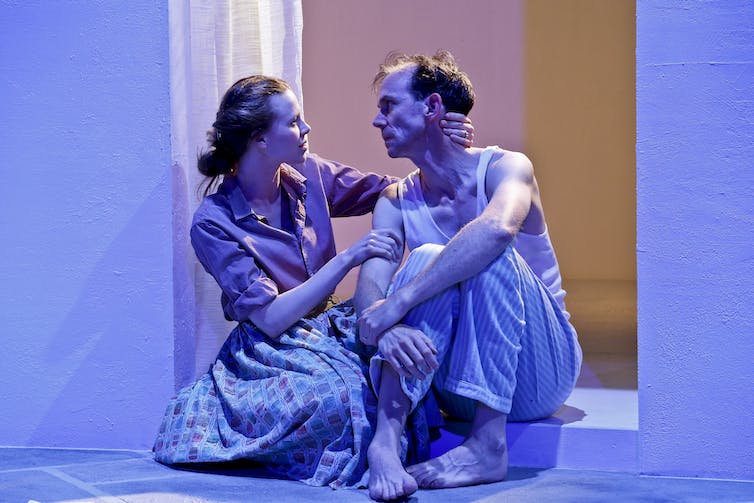 Sidney Nolan and his wife stayed over a summer. Leonard Cohen sang and played guitar. The actor Peter Finch came to recharge his batteries. Representing this pack of dissolute expatriates in the play is the comical figure Jean-Claude (Ray Chong Nee), a louche painter with a winning smile and professionally French in his equal commitments to infidelity and existentialist philosophy. 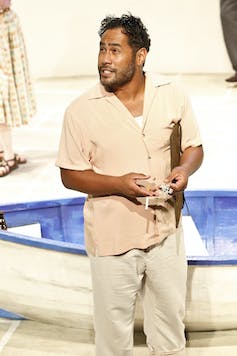 Out of this raucous environment would come one of the great works of Australian literature, My Brother Jack, written by Johnston, but importantly nursed into existence by Clift in the final years of their life on the island.

The story of their tumultuous relationship is told in the play from the perspective of their son, the poet and novelist Martin Johnston, played with a vulnerable, naïve charm by Nathan O’Keefe.

It takes a degree of monstrous narcissism to think that you could write the “great Australian novel” and the play doesn’t spare its audience any of this unpleasant side of the creative process. In an excruciatingly awkward scene, we watch Johnston and Clift at work, bashing out words with duelling his-and-hers typewriters positioned at either end of a table.

Petulant, hungry for attention and eager for praise, Johnston is childish in his behaviour. Keen to display his virtuosity and indifferent to Clift’s feelings, he rewrites her work to give it more “energy” and can’t understand why she doesn’t respond to his interventions with gratitude and enthusiasm.

The play strongly suggests that My Brother Jack was written at the expense of Clift’s own literary endeavours. In a heart-rendering moment, Clift puts the cover on her typewriter, never again to be removed, so that she can devote herself to editing Johnston’s manuscript.

We possess Clift’s accounts of her time in Greece in the form of the autobiographies Mermaid Singing and Peel Me a Lotus, but she clearly had a lot more to say had her energy not been so used up in nursing her husband. Anna McGahan’s portrayal brings out both the brittle fragility of Clift and her underlying strength. She sacrifices a lot, but never loses the driving will to write herself into lasting memory, to make herself be seen. 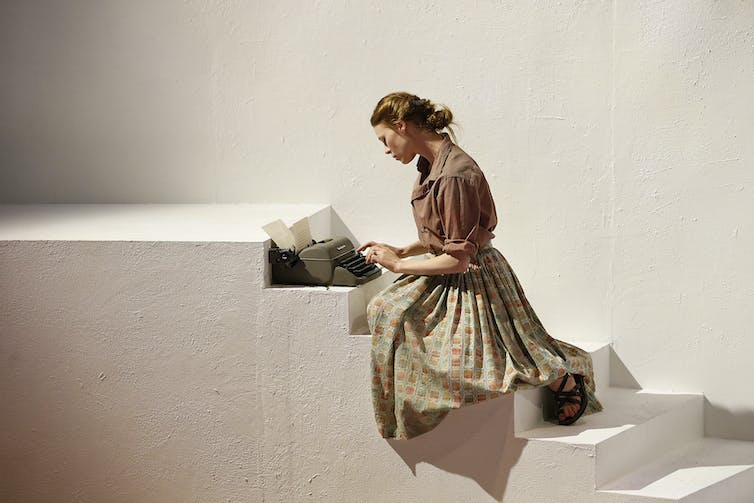 Hydra explores the sacrifices Charmian Clift (Anna McGahan) made while living on the island. Jeff Busby

Acting as a foil to Johnston and Clift are the couple Vic (Hugh Parker) and Ursula (Tiffany Lyndall-Knight), thinly disguised versions of Sidney Nolan and his wife Cynthia Reed. Ursula is a wonderful bit of writing. Deliciously dislikable, she cuts through her scenes like a scythe. At one point, she compares herself to Daedalus and Vic to Icarus.

However, compared to the fiery theatrics of the Johnston-Clifts, both of them look plodding. Vic’s worldly ambitions ultimately hold him back. You can’t reach the heavens and also make it home in time to be guest of honour at posh dinner parties.

There is a great irony that one of the masterpieces of Australian literature should have been written in Hydra. Greece is not a place conducive to new, thoroughly original, distinctive stories. It always threatens to swamp you with its own stories, crushing you with the weight of its mythology. Nolan tried to paint Gallipoli, but could never escape the pull of Troy.

The exact process of how My Brother Jack came into being remains a mystery. The triggers that caused Johnston to turn inwards, away from his island idyll, back to his own life and far-away homeland continue to be elusive.

No one knows where great art comes from. Hydra instead explores the costs associated with the creation of art and the demands placed on anyone who would seek to fly free. It is tragic, comic, heroic, and in that sense thoroughly Greek.

Hydra is playing at Queensland Theatre until April 6.