Your lipstick and foundation will be less likely to come at the expense of animal welfare, thanks to Commonwealth legislation that passed in recent weeks.

The legislation, which will come into play on July 1, 2020, follows a commitment the Coalition government made during the 2016 election campaign to introduce a ban on cosmetic testing on animals, backed by strong public support. The RSPCA asserts 85% of Australians oppose testing cosmetics on animals.

The legislation was a long time coming – it was first introduced in June 2017 – and is a step in the right direction, but it doesn’t go far enough.

Animals are sentient creatures – they feel pain and distress just as humans do. Given the increasing recognition of the extent of animal sentience, reflected by various international laws, it is well and truly time to rethink our approach to testing on animals for any reason.

Cosmetics are often tested on rabbits, guinea pigs, hamsters, rats and mice. It commonly involves applying chemicals to the shaved skin or eyes of rabbits, force feeding, and testing to determine what dose of chemical will cause death.

Such testing causes significant pain and distress for the animals involved and most animals are killed following an experiment. According to Humane Society International, around 100,000 to 200,000 animals suffer and die for cosmetics around the world each year. 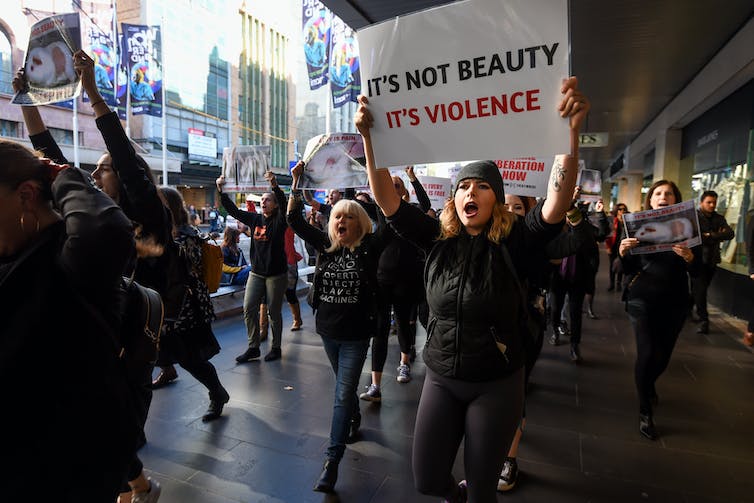 A protest of animal testing in cosmetics in Melbourne, 2018. Penny Stephens/AAP Image

The federal ban will impact a wide range of products.

The legislation defines “cosmetic” as “a substance or preparation intended for placement in contact with any external part of the human body” with the aim of altering odour, changing appearance, cleansing, maintaining, perfuming or protecting it. Make-up, facial cleansers, soap, deodorant, perfume and moisturisers are all included under this definition.

But only chemicals intended for use in cosmetics will be affected. Chemicals in household cleaning products, for instance, are found in many cosmetics, and will not be impacted by the new legislation.

This is a significant loophole, as most chemicals using animal test data are used for a variety of purposes.

Australia is not alone in banning the testing of cosmetics on animals, and the recent legislation shows our effort to join the international trend.

When discussing the new legislation in parliament, then Assistant Minister for Health, David Gillespie, said:

Australia is moving away from the use of animal test data for other purposes, so that animal test data, like in the EU, would be used as a last resort where science has not yet developed valid alternatives that can assure continued protections for human health, worker safety and the environment.

The RSPCA estimates between 4 and 5 million animals are used to help develop medicines, test the harmfulness of chemicals and drugs, and for education and training each year.

Animals are also commonly used in ways that aren’t directed at saving lives. Agricultural research, for instance, might be aimed at increasing the productivity of animals used for the production of human food.

Animals are also often used in high school and university science classes. The dissection of frogs, for instance, helps students understand anatomy. But most of the time, these classes aren’t associated with training students for veterinary or medical practice, according to Animals Australia.

The 3Rs are incorporated in the Australian Code for the Care and Use of Animals for Scientific Purposes. Other jurisdictions incorporating these principles include a European Union directive on the protection of animals, the UK’s Animal (Scientific) Procedures Act and in Japan via The Law for the Human Treatment and Management of Animals 2005.

To progress further down the path of banning all animal testing, it is critical to develop and authorise alternatives to animals in testing, such as the use of computer models, cell cultures and human tissues.

As the RSPCA advocates, Australia should ensure there is dedicated government funding for developing these alternatives, implement a national strategy to reduce animal use and establish a national centre to implement the 3Rs.