In recent months, we have been confronted by events that make the world seem unsafe. Among these are the horrific stories of child sexual abuse, the rise in Aboriginal youth suicide and the tragedy of mass killings at the hands of an Australian terrorist in Christchurch.

Many of us feel anger, despair, hopelessness and grief as we are hit by what feels like a constant barrage of bad news. It’s important to take care of our mental health during such times, but it’s also vital to think about how children and young people are experiencing and responding to difficult events, and the ensuing emotions.

During the life of the Royal Commission into child sexual abuse, we conducted a study to better understand how children and young people conceptualise and experience safety. We wanted to know what they believed adults might do to both keep them safe and help them feel safe.

Below are some key messages children and young people wanted to get across to the adults in their lives.

Children know the risks, but might misjudge the extent of the danger

In addition to snakes, ghosts, escaped tigers and bullies, participants raised concerns about child abusers and abductors, online dangers, wars and terrorism. They said they learnt about these threats by hearing things directly from parents, siblings and peers (including quiet discussions that weren’t for them), the television and radio, and social media.

Many children and young people felt they were exposed to so much information about risk, they often found it difficult to determine how pressing the danger was. When their parents, teachers and other trusted adults failed to talk to them about the issues, they said they often imagined the worst-case scenario.

Sometimes we freak out when we don’t need to. We might have heard something and now we think that it’s a huge risk but it could turn out that we’ve heard the wrong thing or that it’s not really a problem.

No one really talks to kids about what really could happen or tell them not to worry when the thing they’re scared about ain’t gonna happen. So kids are all stressing about the wrong things and they don’t know what to do if something real bad happens, because no one talked to them about it.

Young people believed children lacked the ability to accurately assess threat. When news reporting was coupled with fictional movies and urban legends, and when children were not given context, their perceptions were skewed.

Children and young people told us they were often overwhelmed by the risks that surrounded them. Young women, in particular, said they were constantly worried about threats to their physical and emotional safety.

Children felt this lack of safety in their bodies – they sweated, felt butterflies in their stomachs, found it hard to settle and concentrate, and were easily frightened. They demonstrated these fears in their behaviours – by being restless, feeling tired and fighting with others.

They said it was often difficult to articulate their emotions and they needed adults to help them find the words. They needed help to understand the links between their lack of security and their response. 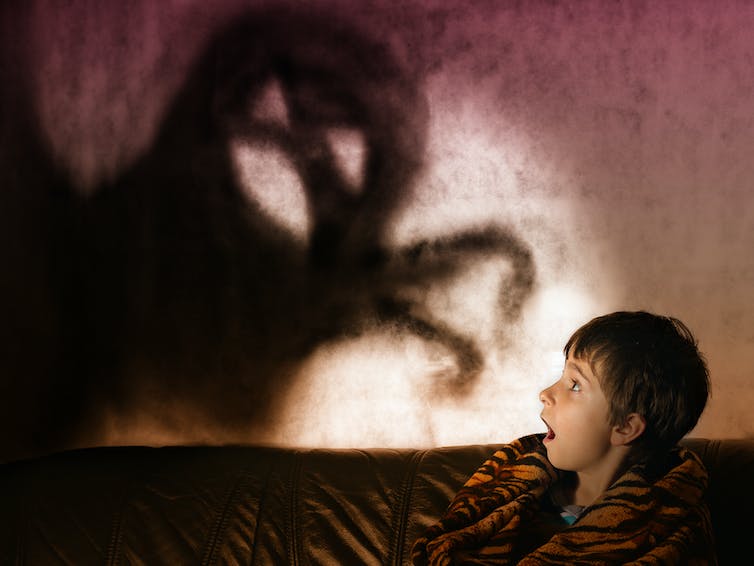 Children said they often had trouble articulating their fears. from shutterstock.com

Children and young people felt adults often too readily dismissed their concerns and downplayed the impact their fears were having on them. One young person said:

Participants said trusted adults should listen and acknowledge their feelings, and take their fears and concerns seriously. They wanted adults to let the child voice their thoughts and feelings before trying to solve them and to respect the child’s experience.

They felt it was sometimes appropriate for adults to distract a child to help them calm down. But they also believed adults should return to the conversation when the child was calm to help them make sense of their fears and feel acknowledged.

Tell young people what is being done to protect them

Participants observed the information they were given was often restricted to the risk or danger, but they weren’t being told what was being done to protect them.

Participants said they had heard a lot about the threat of child abduction, for instance, but no one had told them there were more police stationed around schools, that teachers were more vigilant and that policies were in place to reduce the likelihood a child could be harmed.

Young people reflected that when adults didn’t inform them of how they were responding, children had little confidence adults fully appreciated the risk or were adequately equipped to keep them from harm.

Many participants also believed adults could not always be around to help protect them and it was important for children and young people to be skilled to deal with issues themselves. This was seen as particularly important for older young people who were more likely to be alone and who would more likely want to deal with issues themselves rather than seek support.

They advocated for more classes on how to assess and respond to risks, giving examples of drills, role plays and lessons from others who had confronted similar challenges. It was important the recommended strategies were effective because young people felt the consequences of doing the wrong thing when they were unsafe would be significant.

They’ve gotta get it right or we’re fucked, you know. It’s better to feel scared and to watch out for things than to feel comfortable because someone has told you not to worry and then you end up in a bad situation because you got the wrong advice.

Ultimately, children and young people need adults who are there for them, who discuss their fears, provide them with enough information to deal with potential threats but not cause them unnecessary worry, and help them understand how other adults and the community around them are keeping them safe.

The study in this article was commissioned by the Royal Commission into Institutional Response to Child Sexual Abuse. It was conducted by the Australian Catholic University, and peers from Griffith University and Queensland University of Technology.